These proven rimfire, centerfire, and shotgun predator rounds will help you stop coyotes in their tracks. Plus, we pick the No. 1 all-around best coyote caliber 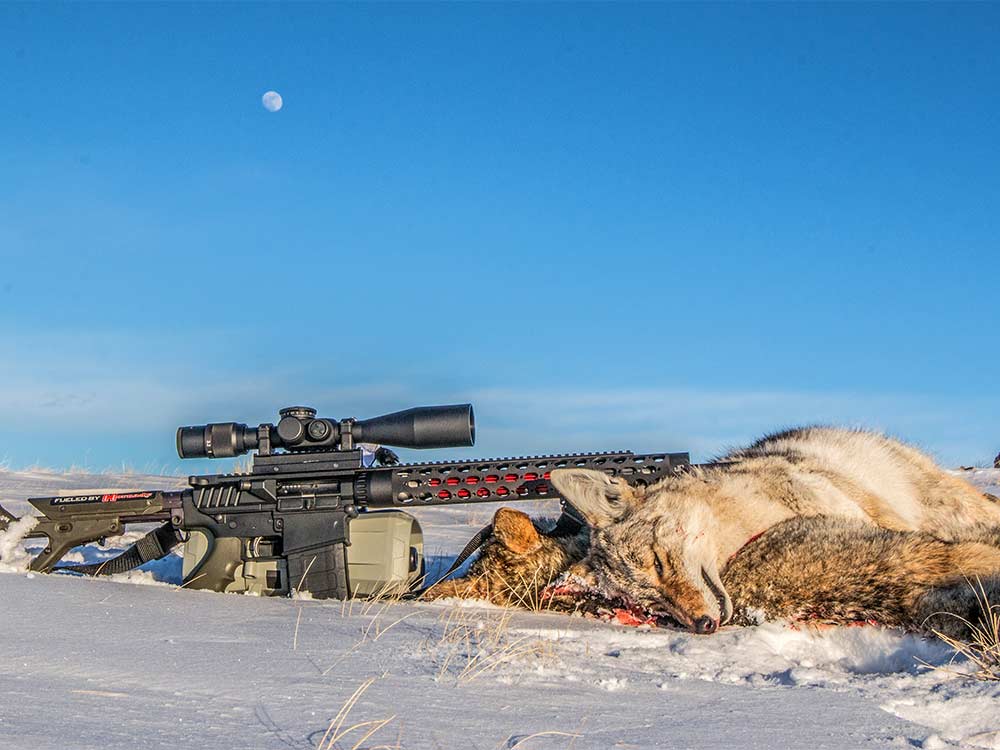 Nearly any cartridge can take down a coyote, but some perform better than others. Richard Mann
SHARE

A century ago, coyotes claimed only half of North America as home. Since then, they’ve spread over the entire continent, and you can find them from El Salvador to Newfoundland to Alaska. Also known as brush wolves, prairie wolves, and American jackals, coyotes vary in size based on their geographical location. Eastern and northern coyotes can approach 60 pounds, while those from the southwest generally weigh half that much, even after a jackrabbit buffet. Coyote hunters vary, too. Some like to snipe coyotes at long distances, while others like to call them right into their laps. While Western rifle hunters debate the best coyote caliber, many Eastern hunters prefer a shotgun. The truth is, most any cartridge can take down a coyote, but we recommend choosing from the list below of 10 prime coyote cartridges and the optimal load specs for each. You might favor just one or two, but coyotes don’t like any of them.

What to Look for in a Great Coyote Cartridge

Coyotes are hunted and killed with everything from a .22LR to a .30/06 and a 12-gauge. All will work within their limitations. The key is selecting the right load for the cartridge you’re using.

Rimfires, though not an ideal choice for coyotes, can certainly work. What they lack for in bullet velocity and explosiveness, needs to be made up for with a balance of expansion and penetration, and optimum shot placement. With the exception of the 3000-fps 17 Winchester Super Magnum, avoid explosive varmint bullets. Go with the more traditional jacketed-hollow-point styles, like the CCI Velocitor in 22 LR or CCI GamePoint loads for the .22 WMR and .17 HMR.

Read Next: The 5 Best Rimfire Loads for Coyotes

For centerfire rounds, fragile lightweight bullets hitting at high-speed are the most instantly lethal on coyotes. Common big-game bullets will kill coyotes, too, but they’re designed to provide more penetration than expansion. Regardless the cartridge, choose a light-for-caliber bullet with a high ballistic coefficient. When they smack a coyote, it’ll sound like kicking a watermelon, and the dog will usually fall in his footprints.

Now, let’s look at each of the 10 best coyote cartridges in three different categories.

A great general-purpose coyote cartridge, the .223 Remington is also the most common load for AR-15-style rifles. Modern sporting rifles are very accurate, offer fast follow up shots, and are easy to carry in the field. If your scope and gun are aligned at a proper zero, you can hold dead on out to 300 yards and just about any expanding .223 bullet will work. That said, the lightest bullet weights are more pelt friendly, whereas deep penetrating projectiles work better when you need to take a raking shot on a retreating brush wolf. At 3,300 fps from a 16-inch barreled MSR, the new 40-grain Varmint & Predator Tip load from Sig Sauer is a good compromise. 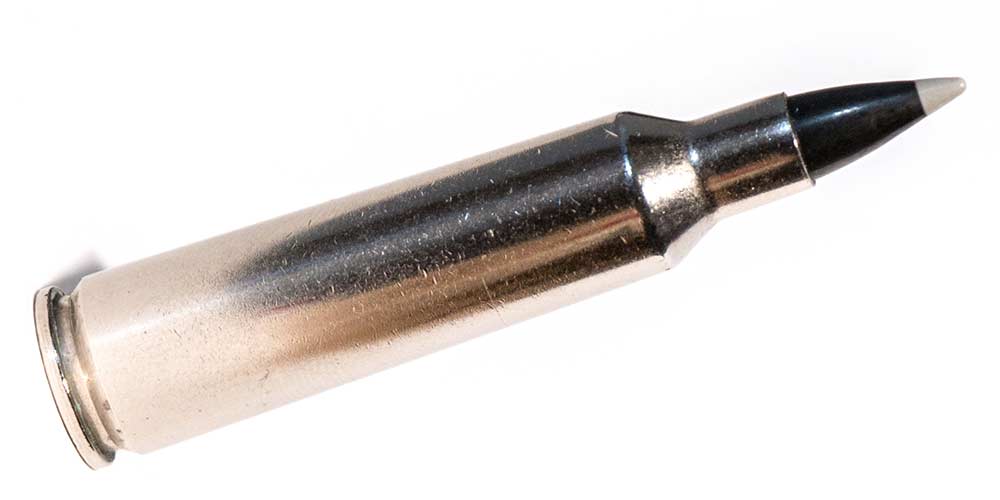 Bullets from this 80-year-old cartridge propel faster, fly flatter, and hit harder than anything fired from a .223 Remington. At 400 yards, it will do what a .223 Remington will do at 300. Older .22-250s have slow-twist barrels and won’t stabilize the highest ballistic coefficient .224-caliber bullets. But that’s OK; a 55-grain Nosler Ballistic Tip bullet sizzling out of the barrel at more than 3,600 fps is the equivalent of coyote cyanide. Federal offers this bullet in their V-Shok line, and it’s available from Winchester in the Ballistic Silvertip line, which they load in nickel-plated cases. 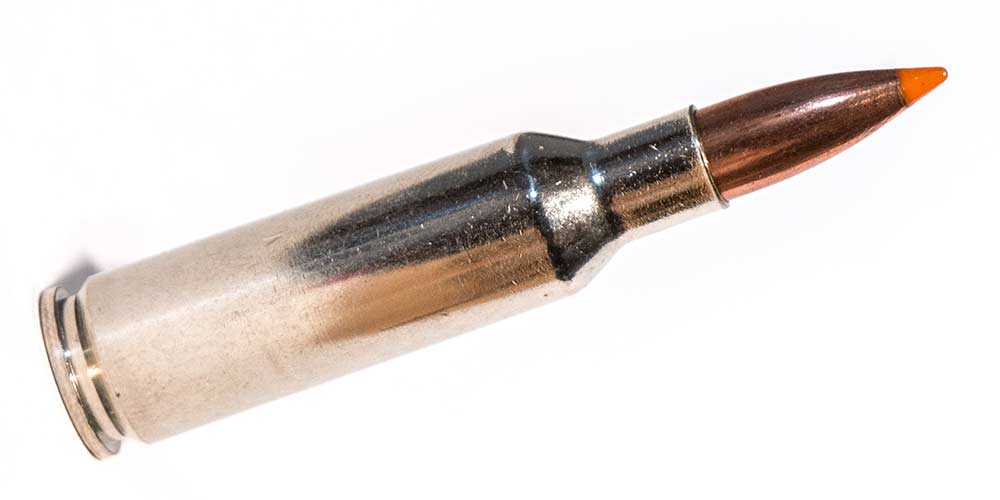 Based on the 6.8 SPC case, the design of the .224 Valkyrie was supposed to extend the range of the modern sporting rifle, without undue recoil. The Valkyrie can push long, slender bullets far beyond what the .223 Remington can muster. This makes hitting targets at long range easier, and because these bullets retain their velocity so well, they hit harder. The Valkyrie might just be the best coyote cartridge available in the AR-15 platform. Federal’s American Eagle Varmint & Predator load, topped off with a 60-grain Nosler Ballistic Tip, works on coyotes from coast to coast.

Once considered the definitive dual-purpose cartridge, Winchester’s 6mm can handle nearly anything from coyotes to elk. It also has the distinction of burying the 6mm Remington and stymieing the popularity of the .257 Roberts. Lighting fast with little recoil, the .243 will reach out and smack a coyote hard enough to knock tics off its hide. Plus, about every rifle design you can think of is chambered for .243, including modern sporting rifles. With this caliber, there are lots of loads to choose from and about any of them will work on coyotes. Remington’s 75-grain AccuTip-V is one of the best all-round loads.

Based on the .250 Savage, the .250 Ackley Improved is a fantastic wildcat cartridge for coyotes. It shoots flat and hits hard, even at long distances. But you’ll have to fire-form the brass and that’s about as much fun as doing your bother-in-law’s taxes. A better, more modern option is another wildcat best described as the .257 Creedmoor, which is also known as the “2Fity-HillBilly.” It will outperform the .250 Ackley Improved, and you can easily form cases with nothing but 6.5 Creedmoor bushing dies. A 75-grain Hornady V-MAX ahead of 46.0 grains of CFE 223 at 3,600 fps will have no problem taking down any coyote.

Long championed by a cult-like group of followers as the best all-round cartridge for the MSR, the Grendel is as close as you’ll get to 6.5 Creedmoor performance from an AR-15. It won’t shoot as flat as the Valkyrie, but it’ll throw a heavier bullet. Coyotes won’t know the difference but for those who want a modern sporting rifle to be a dual-service rifle—capable of dealing with predators and big game—the Grendel is the best option. The new 90-grain TNT load in the Federal American Eagle line should be ideal for this compact cartridge, and it’s also available for bolt-action rifles.

You’re probably sick of hearing about the 6.5 Creedmoor, and you probably think outdoor writers get paid extra to write about it. Not true; the cartridge simply offers the best balance of ballistics, reach, and recoil of anything you can comfortably fire from the shoulder. The Creedmoor won’t kill a coyote deader than a .243, but it’ll make hitting them at distances easier. Just as important, its popularity has led to an extensive selection of factory ammunition. The new 95-grain Varmint Express load from Hornady with a 95-grain V-Max should be just about the perfect prairie-wolf death dealer.

This Russian military cartridge does not have much reach and doesn’t hit all that hard. However, a variety of ranch-style rifles, like the Ruger Mini Thirty and American Ranch Rifle, and the CZ 527 Carbine are perfect for stashing behind a truck seat. Popular for those who work the land and run cattle and sheep, you can wield these handy and accurate rifles quickly and efficiently should a four-legged varmint appear on the skyline. Any expanding bullet will work fine, but if you’re experiencing livestock depredations from wolves too, Federal’s 123-grain Fusion load might be the best bet (where legal to cull Canis lupus). 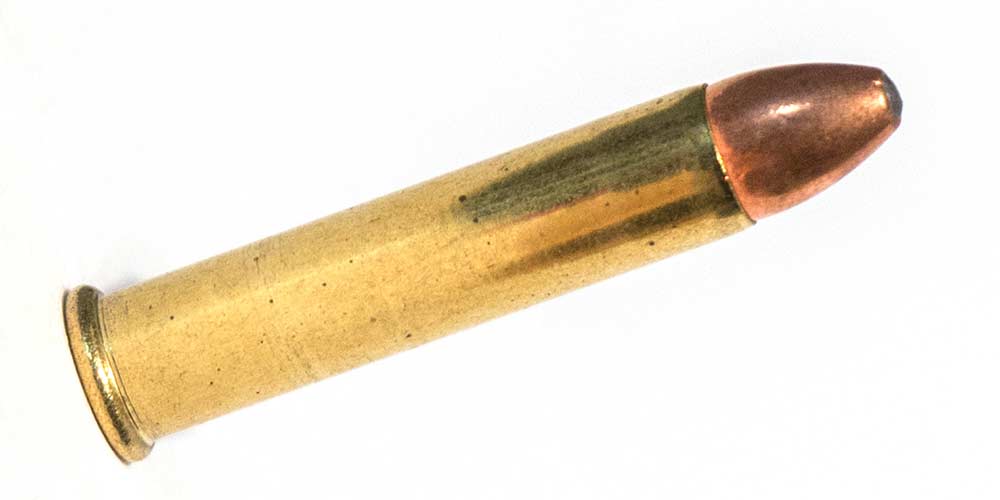 Though somewhat underpowered, the .22 Magnum is a favorite for hunters who want minimal pelt damage (the entry and exit holes won’t be so large as to make it tough to tan the hide). That said, the .22 Magnum is a low velocity bullet that causes limited internal damage, so your shot has to be perfect. Traditional copper-plated hollow points or FMJ loads are best, especially if the bullet hits a bone on entry. For best results, keep shot distances to less than 75 yards, and aim for the head or heart. Work the gun action fast too; you might need to get another bullet in your target as an anchor. CCI’s standard 40-grain jacketed hollow-point load is one of the best, but their 40-grain Game Point load might be even better 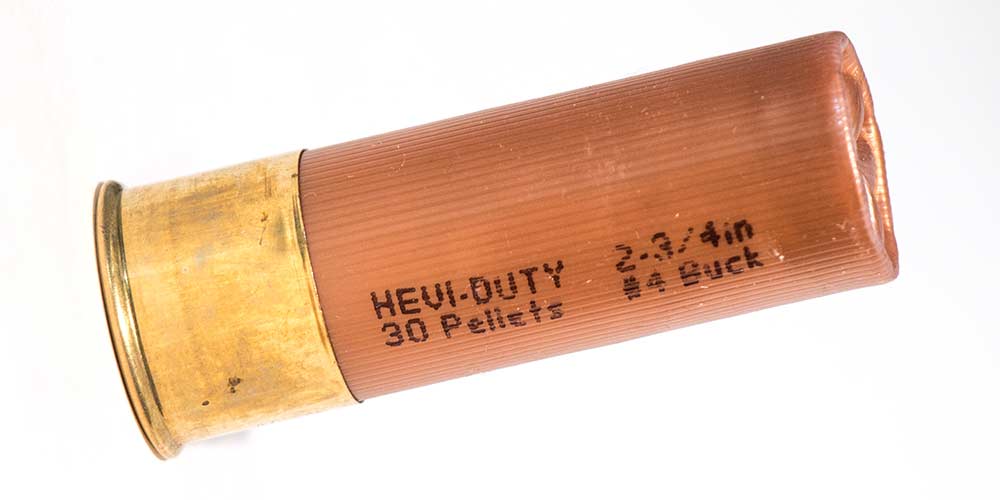 Jeff Cooper’s daughter Lindy once prophesied that “there ain’t many troubles a man can’t fix with 700 dollars and a .30-06.” The same might be said for the 12-gauge shotgun, at least if trouble is at close range. When the coyote action is in your face, which can often happen when calling from under tight cover, few cartridges can put down a song dog with the authority of a 12 gauge. Check out Federal’s Vital Shok Buckshot load, which contains 41 pellets of #4 buck for cataclysmic coyote annihilation.

So, you’re a hardcore coyote hunter and you want to buy a dedicated dog gun that is well suited to hunting ‘yotes in a variety fo places using a variety of methods. In other words, an all-around coyote gun. The question is, what caliber (or more correctly, what chambering) should you choose? Let’s break down.

Hardcore coyote hunters wants to spend their time hunting, not handloading. That means their rifle should be chambered for a cartridge that’s available everywhere and with lots of load variety. They also want a gun that is as effective at distance as it is up close. That means they need a flat-shooting cartridge. Hardcore hunters also often call in coyotes in bunches. That means they need a chambering that’s commonly offered in semi-automatic rifles, in case they want the option of not shucking a bolt-action while coyotes are running away. Nothing checks all these boxes as well as the .223 Remington. There are cartridges that shoot flatter, hit harder, and that will work in an MSR. But when everything is considered, given the vast array of munitions to choose from, the .223′s availability, light recoil, and good external and terminal ballistics make it the best rifle all-around cartridge for the hardcore coyote hunter.