Want to bag a bird this year? Check out our pro advice on mouth calling, friction calls, locators, deadly setups, and more 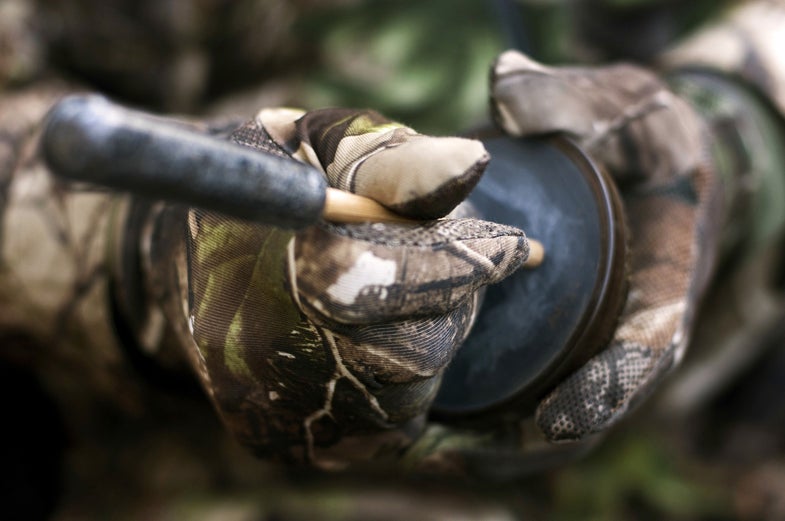 Strike a wasabi-hot 2-year-old bird, and you might yelp him up with a rusty nail and chunk of granite. But the better caller you are, the more toms you’ll suck into gun range. We polled a bunch of decorated calling-contest pros, guides, and general turkey nuts for their best spring turkey calling tips. Here’s what they said.

“Everyone’s afraid that yelping at a tom on the limb will keep him in the tree forever, so they wait until fly-down to call. In my opinion, it’s a big mistake,” Simpson says. “I may not pour it to a roosted bird, but I want him thinking about me before he sets his wings to pitch.

And if I know he’s roosted with hens, I amp it up more. I want them to believe there’s a party going on by my boots, and they better get there in a hurry.”

“Locator calls are critical for roosting birds in the evening and pinpointing them before fly-down, but I use them constantly when I’m working a bird, too,” Brown says.

“If I need to move and check his position without making him head my way, I use a locator call. I use crow and owl calls, as well as some unique ones, like woodpeckers, wood ducks, and sandhill cranes. For getting a bird to gobble at dark, a coyote howler is a killer here in Missouri, and an elk bugle works on western birds. One thing I have noticed: if a gobbler responds once to a standard crow call—a simple ‘caw-caw’—the next time you might need to amp it up a bit or switch to a different call.”

Budz will strike a bird with anything he can. “I’ll use a box call, friction call, or whatever I need to reach out to a bird in the afternoon or when nothing is gobbling,” he says.

“But as soon as I get a tom fired up and coming, I try to transition to a mouth call so I can work him in that last bit hands-free. So if he gobbles to a box, I hit him right away with a mouth call. If he doesn’t gobble immediately, I go back to the box, make him gobble, then try him again on the mouth call. Eventually he’ll start gobbling to the mouth call, and as soon as he does I put the box down and work him the rest of the way in with that.”

When a gobbler plants his feet, sometimes even the sexiest hen yelping in the world can’t make him break—but a jake yelp might piss him right off.

“I’m not a big decoy guy, so I rely on calling to make a gobbler think he’s got competition,” Yargus says. “I’ll use jake or gobbler yelps, which have the same cadence as a hen yelp but are slightly longer and deeper. Fighting purrs are another good option. Make them on a pot call by purring on one side of the call, then the other. And if you really want to catch their attention, beat a turkey wing on the ground, or against your leg, a couple times. If that hung-up turkey thinks there’s a fight going on over the hen he heard, he’ll usually break.”

“The first step in learning to run a mouth call is just learning to make basic turkey sounds—in the right rhythm and cadence—with your mouth,” says Benefield.

“Learn to enunciate that soft ‘yelp-yelp-yelp’ sound with no slurring of the notes. When turkeys talk, there’s a clear separation of sounds. The most common mistake new callers make is running the sounds together, especially when they’re trying to cutt. Open your mouth as you call to break up the notes. When you watch a hen turkey yelping, she opens that beak with every note.”

Learn to use a mouth call by starting with a simple single- or double-reed call, and make sure the tape seals nicely against the roof of your mouth. Trim it if necessary.

“Remember not to bite down on the call,” Benefield says. “When you do that you’re blowing air up from your lungs, rather than releasing it from your diaphragm and across your vocal cords. There should be very little air actually coming out of your mouth. If you held a Kleenex in front of the face of most competitive callers, it would barely move while they’re calling. It can help to watch yourself in front of a mirror, so you can see your mouth opening and closing like a bird’s beak.”

When a turkey answers, we love to keep calling—but that’s not always the best plan.

“Calling too much can make a gobbler hang up and insist that the excited hen come to him,” Parrish says. “Also, if you make him gobble too much, an actual hen will eventually walk in to him, and you’re done. Once I know I have a gobbler’s attention I go to soft calls or even silence. Curiosity can be one of the deadliest tools to use on a gobbler.”

The setup is often more important than the sound.

“We all know about eliminating barriers that turkeys don’t like to cross,” Ellis says. “But sometimes birds just like being in certain areas—a hardwood ridge, a lake shore, a field contour—and we aren’t going to call them in unless we reposition and get to that spot. Learn to use cover and terrain to move on a gobbler until you find that place he wants to be. Distance is another huge factor. I hunt a lot of public land, and I’ve learned that getting tight to a gobbler makes all the difference. The shorter the gap he has to close, the better chance I have of killing him.”

“On days when they’re not gobbling well, I stir things up with an aluminum-faced pot call,” Stoltz says.

“I’ve been running friction calls for 20 years, and nothing pulls gobbles from shut-mouthed toms like an aluminum call. I can’t prove this, but I feel that the high-frequency sounds made by calls like the K&H Canyon Cutter just can’t be produced by other calls, so turkeys are hearing something unique. They’re also very effective on windy days or when you’ve got background interference like road noise. I carry two strikers. Carbon is perfect for loud, aggressive yelping and cutting, and once the gobbler is coming I’ll switch to a wood striker for softer yelps and clucks.”

Given his time on the contest stage, Martin certainly knows his way around a mouth call. But when it comes to putting a tag on a gobbler, he recognizes that many call types can seduce a hard-to-kill tom.

“No two hens sound the same,” he says. “So using more than one call type makes perfect sense while working a gobbler. I’ll run a mouth call, slate call, and a box call almost simultaneously. Only one of them might really make the tom gobble, but by imitating the sounds of multiple turkeys, you can push a bird into thinking that he’s really missing something by not being right there with you, right now.”