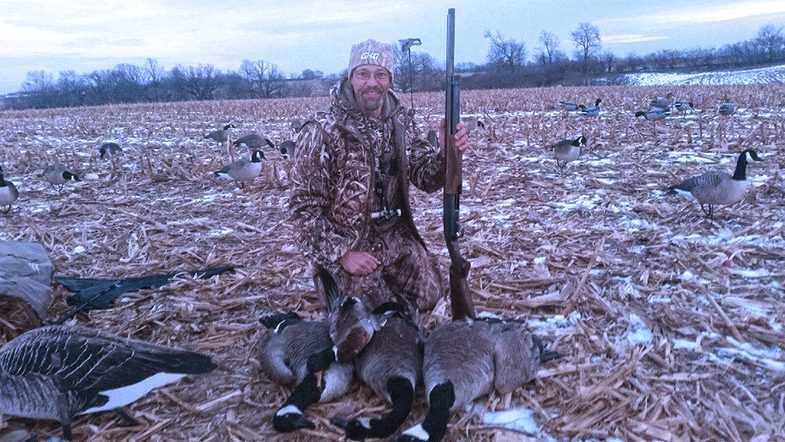 The author and his 10-gauge shotgun, plus a limit of geese. Phil Bourjaily
SHARE

If there is a brother — and sister — hood of the 10 gauge, it doesn’t have many members left. I belatedly joined it myself this year. The gun in the picture is a 10 gauge BPS, one of only two 10s left on the market, the other also being a Browning, the Gold 10 semiauto. Remington’s very soft-shooting SPS 10, which for a long time was the third remaining 10 in production, was unfortunately discontinued a few years ago.

Yet still the 10 gauge hangs on, mostly in the hands of goose hunters. Ten gauges tend to pattern large pellets very well. A few years ago I had the Federal engineers compare a 10 vs a 3 1/2-inch 12 head to head in their test tunnel for me, and the computer analysis gave the 10 a slight, but definite edge with factory loads and the shot strings were shorter, too. My gun, with a Rob Roberts T2 (Light Modified) choke, shoots great 75% patterns at 40 yards with big shot, and I have no doubt I could tighten them significantly with a tighter choke if I wanted to. Handloaders, especially those who push the envelope, are the ones who get the most from the 10.

Besides patterning, 10 gauges have weight on their side. At a time when waterfowl guns keep getting lighter, which I believe is a mistake, shooting a 10 gauge is an act of protest. Mine weighs 9 pounds, 10 ounces with its 24-inch barrel. It’s a chunk of a gun, but surprisingly easy to shoot and handle in a layout blind. All that weight soaks up recoil, too, and that’s in a pump. Get a hold of a 10 gauge semiauto and you can sling large payloads of pellets skyward and scarcely feel a thing. And, honestly, it’s enjoyable sometimes to shoot something specialized and different. Would the duck and geese I shot the other day have fallen any less dead to a 12? Probably not, but shooting the 10 made the hunt more fun for me, and that’s supposed to be why we go.