Among the dozens of accurate production rifles we’ve tested over the years, these are the best for long-range precision hunting. Hunters and shooters have never had it so good. 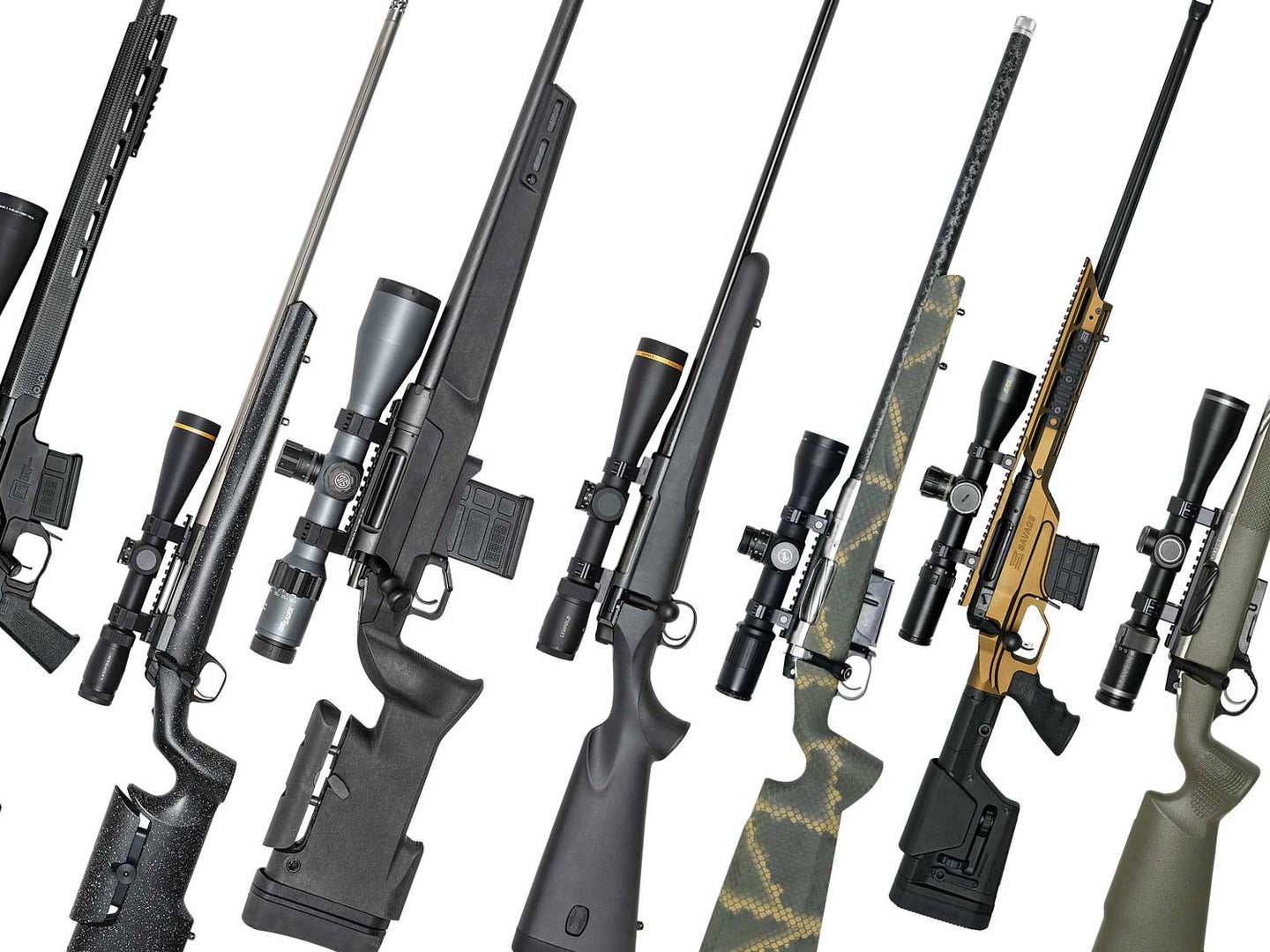 When it comes to long-range hunting rifles, I get asked two questions more than any others. The first is: “What’s the best rifle money can buy?” Well, if you want an answer to that, pour some whiskey and pull up a chair because there are many layers to that question and we’re going to be here a while. The second question is: “What’s the most accurate hunting rifle made?” The answer to that is a lot simpler.

Over the years I’ve tested dozens of new rifles, putting them all through the same rigorous protocol of shooting multiple 5-shot groups with different types of factory ammo. Good rifles will print some loads very well. Great rifles shoot all kinds of ammo well. This list is comprised of great rifles—shooters all.

As you’ll see, some are made for competition, and some are made for hunting. Some are high-end rifles costing several thousand dollars, and some are inexpensive enough that you might be tempted to buy two, just because. But what they all have in common is a remarkable ability to cluster their shots into tiny groups under real-world conditions. So, to answer that question about the most accurate rifles made—here they are.

The Pro Hunter is a near-perfect expression of the modern long-range hunting rifle. While its design is influenced by competition rifles, particularly in the stock, it retains the moderate weight (7.3 pounds) and lively handling that a good big-game rifle requires. The barrel’s spiraling is visually distinctive, and the trigger breaks crisply at 2 pounds 5 ounces. Check availability here.

Browning’s latest delivers top-notch long-range hunting performance at an attainable price, as the company was able to shave costs by making the new stock in-house. The rifle runs on Browning’s smooth three-lug action and is fed by its rotary magazine, which is easy to load and utterly reliable. My test rifle delivered terrific accuracy with a variety of factory loads. Check availability here.

Off the bench, the Switch is one of the most accurate guns we’ve shot. Mine, in 6.5 CM, has turned in numerous bug-hole groups, including a .181-inch screamer. But it is a hell of a precision hunting rifle too. At just under 7.5 pounds, it is super-portable and handy. But the stock is built like a tank, and with a solid rest, the rifle really reaches out there. It’s called the Switch because you can easily swap out barrels. Check options here.

This big brute isn’t made for hauling into the mountains. With a 26-inch barrel, oversize muzzle brake, and stout chassis stock, it hits the scales at 11 pounds 12 ounces empty. Chambered in 6mm Creedmoor, it has the ability to hit targets a long way off. With factory Hornady 108-grain ELD Match loads, it shoots .5 MOA (or better), making 1,000-yard hits on steel with relative ease. Check options here.

This doesn’t look like a traditional hunting rifle, but don’t let that fool you. With carbon fiber on the fore-end and barrel, and a skeletonized folding stock, the MPR weighs just over 8 pounds and is quite portable. My test gun printed many groups with factory ammo in the .4s, making it a great long-range hunting rifle. Its TriggerTech Diamond trigger is among the best out there. Check prices here.

We’ve seen a number of tactical/hunter hybrids recently, but the B-14 HMR really nailed the concept. It combines a competition-style stock, a heavy barrel, and Bergara’s smooth two-lug action, resulting in a 9.5-pound rig that can shoot club matches in summer and be used to hunt big game in fall. It has a lot of nice touches, including flush-mounted QD cups and an adjustable cheekpiece and is one of the most accurate rifles for the money. Check prices here.

The South Fork is one of the new rifles for PRS Production Class, which must cost $2,500 or less. It delivers exceptional accuracy and performance for the price. It is one of the most accurate rifles out of the box we’ve shot. BadRock is owned by Defiance Machine, the foremost maker of precision-rifle actions, and uses a Defiance action. The two-lug bolt gun is wickedly fast and easy to run. It makes the toughest targets seem like chip shots. Check availability here.

This is an impressive debut for Daniel Defense, which is a newcomer to the high-end bolt-action rifle scene. This highly accurate, no-nonsense rifle is built around an excellent three-lug action that operates nearly effortlessly. The ergonomics of the stock—particularly the vertical pistol grip—are about the best I’ve ever seen, though the cheekpiece tends to bite the shooter’s face under recoil. Check availability here.

I fell in love with this little rimfire the moment I brought it to my shoulder and dry-fired the 6-ounce trigger. There’s no such thing as an inaccurate Anschutz—the company makes some of the most accurate rifles in the world—so I wasn’t surprised when it clustered bullets in ragged little holes on target. It has the kind of performance that makes ground squirrels quake in their burrows. The thumbhole stock fits like a custom suit. Check prices here.

The Most Accurate Rifle Cartridges

They don’t build rifles like they used to. They build them a lot better, and the list above proves it. But it’s important to note that the astounding accuracy of today’s off-the-shelf production rifles owes a lot to advancements in cartridge development. It’s no coincidence that the most accurate rifles I’ve tested over the years are chambered in the hottest new rounds—the 6.5 Creedmoor, 6 Creedmoor, and, more recently, the 6.5 PRC.

These cartridges are engineered to get bullets off to the best possible start by making sure the projectile is oriented as straight as possible in relation to the bore, which is done via steep shoulder angles, a minimal case taper, and tight throat dimensions. The specs on these cartridges also call for faster twist rates to optimize their performance with heavy-for-caliber target bullets with high BCs. The result of all it is better accuracy.

So what’s next? How much better can we expect rifles and cartridges to perform?

We can take a clue from the world of target shooting. In benchrest, and more recently in the realm of precision rifle competitions, mild 6mm cartridges rule the roost. The 6 BR has been a mainstay target round for many years, and there’s a pack of similar cartridges that have derived from it or are built around similar concepts, including the 6 BRX, 6 BRA, 6mm Norma BR, 6 XC, and 6 Dasher. The latest entrant in this field is the 6 GT, the brainchild of rifle builder George Gardner and Tom Jacobs, maker of Vaportrail bullets, and a world-class benchrest shooter.

All these cartridges shoot .243-caliber bullets at velocities in the 2700 to 2950 fps range. At these speeds, it is easier to minimize the differences in muzzle velocity from one shot to the next. Most of the time this is expressed in terms of the standard deviation or the extreme spread that we measure with our chronographs—and the goal is to make that number as small as possible. This consistency makes bullet drop at longer distances easier to predict, leading to more hits on target.

So don’t be surprised to see these cartridges offered in a growing number of production rifles. In the quest for ever-better accuracy, they are sure to be part of the equation.