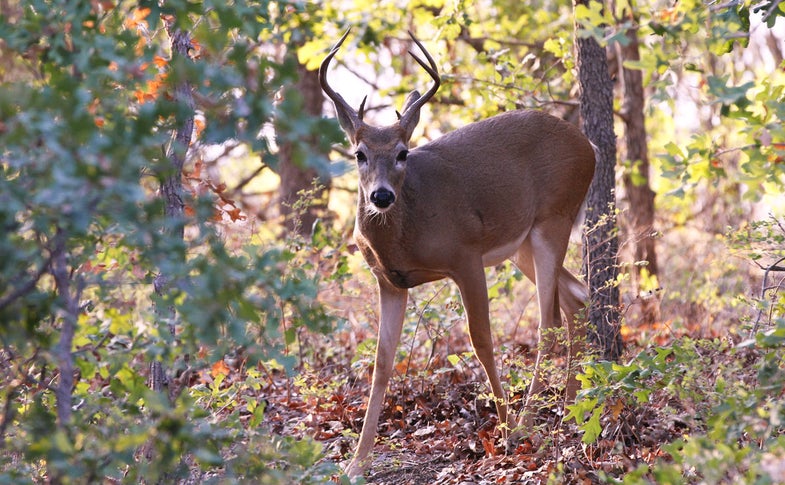 [1] YOU DON’T THINK BIG. Mind-set is key. Hunters who consistently take trophy deer aim big and settle for nothing less, even if it means eating a tag. Begin this season with the firm goal of shooting a mature buck whose rack in nicely sized for your territory.

[3] YOU DON’T HIKE FAR ENOUGH. Hunters tend to walk only a short distance from their vehicles. Big whitetails are aware of this. Hike a mile back from the nearest access and you’ll find lightly pressured bucks to pattern and ambush.

[4] YOU SKIP THE BOW AND MUZZLE-LOADER SEASONS. These seasons are typically held before and after the heaviest hunting pressure, so missing them dramatically reduces your chances. In many areas, an early bow or muzzle-loader season is your only opportunity to hunt the productive pre-rut chase period.

[5] YOU WORK THE EASY COVER. It’s nice to have an open, panoramic view from your stand. And you might see lots of deer. But they’ll be does and young bucks. If you want a trophy, get back in the thickest, nastiest cover your can find that also has good buck sign.

[6] YOU’RE A POOR JUDGE. To kill a big deer, you need to know what one looks like. It sounds obvious, but the term ground shrinkage wouldn’t be so ubiquitous if judging bucks on the hoof were easy. Study videos, books, and articles on the topic before the season.

[7] YOU DON’T HUNT MIDDAY. I’ve seen the most big bucks between 10 A.M. and 2 P.M. Mature deer seem to know that lunchtime finds most hunters at camp. Also, guys heading in and out tend to push deer—perhaps past your stand.

[8] YOU STICK TO MAJOR TRAILS. Focusing on major trails is a great way to tag a deer, but not a trophy. Use them as indicators of where most animals are funneling, then search to the sides in thicker, steeper cover for lightly outlined trails that parallel the well-worn ones. That’s where the older and wiser males travel.

[9] YOU RUN BIG BUCKS OFF. Bump a mature buck once, and you may never see him again. Be careful not to leave scent around your stand. Take a circuitous route in and out if necessary. And only hunt that setup when the wind is right.

[10] YOU’RE STUCK IN A ROUTINE. This season, find some new spots. Follow another path to established stands. Try a ground blind, calling, still-hunting, or maybe a decoy. What you’ve been doing isn’t working, so mix it up until you tag a buck worthy of the wall.