Duck decoys are an important part of the equipment needed to get ducks within shotgun range for maximum hunting success. 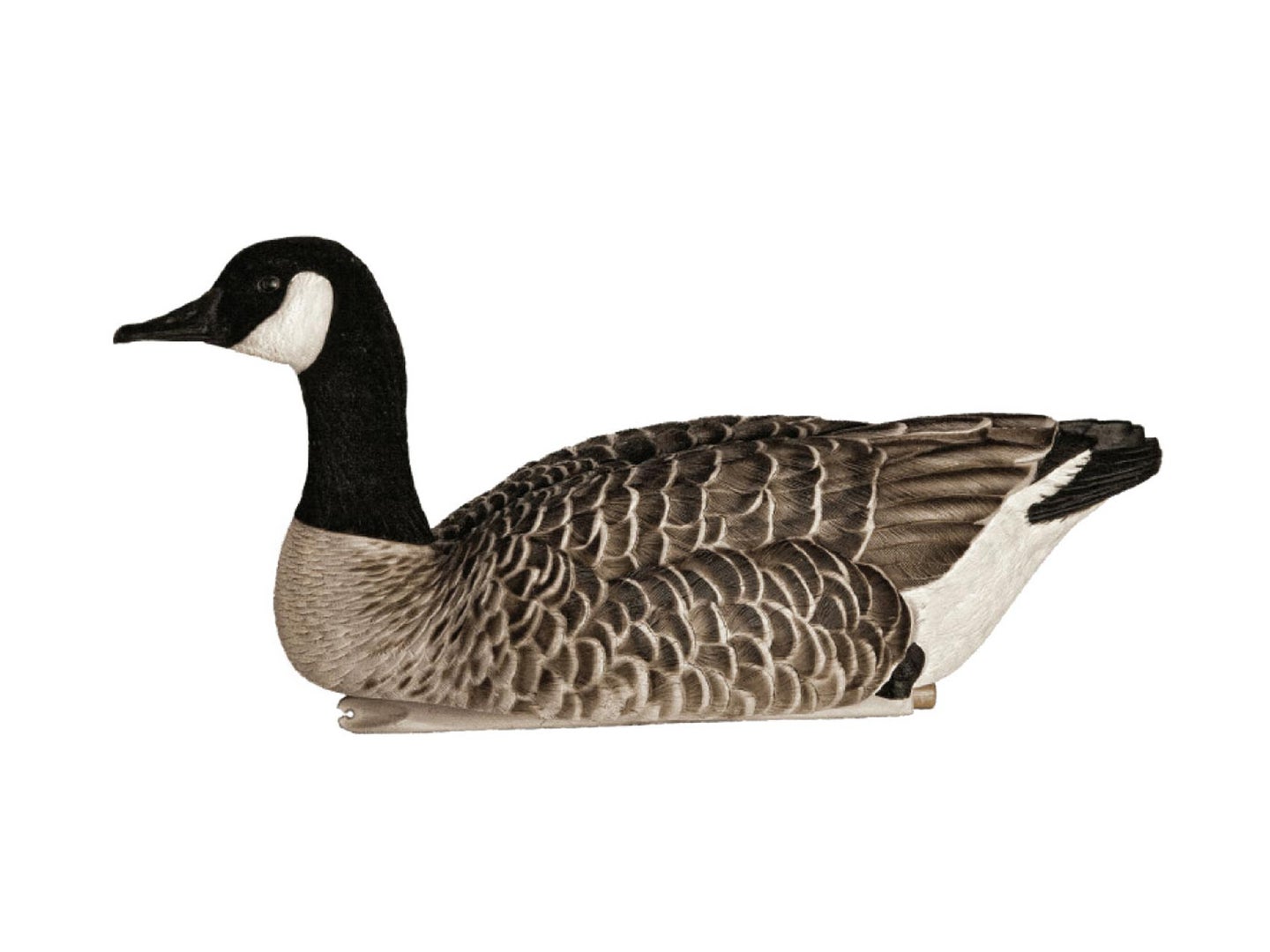 A handful of goose floaters at one end of your spread will not only attract an occasional goose, but also give ducks more confidence that your decoy spread is a safe place to land. Walmart
SHARE

To avid waterfowl hunters, there are few things in the hunting world as exciting as mallards setting their wings and descending right into a well-set decoy spread. The subsequent shooting, ducks falling, dogs retrieving, smiles and handshakes are truly what memories are made of! But getting wary ducks within shotgun range isn’t always easy, since a whole lot of factors have to come together to get to that point. To say that decoys play an important role in duck hunting success is one of life’s greatest understatements. When looking to buy your first set of duck decoys, consider 10 important factors that can lead to more success.

Duck decoys come in many different species, and most are so realistic looking that from a distance you can’t tell them from real ducks. For those hunting puddle ducks (dabblers) like mallards, teal, wigeons and pintails, a good set of mallard decoys will generally get the job done. If you want to mix an assortment of other puddle duck decoys into your spread, it certainly can’t hurt, but it’s likely that more dabblers have been killed over mallard decoys than any other species. For diving ducks (divers), a spread of diver decoys will serve you better. But if hunting both types of ducks, a spread of mallards with a handful of divers added in will usually fill the bill.

Many duck decoys are about the same size as a representative duck of whatever species the decoy is made to mimic. Historically, these were the go-to decoys of avid duck hunters. However, magnum decoys, made larger than standard decoys, are preferred by many successful hunters because they sit higher in the water and are easier for ducks to see from a great distance. The one downside to magnum decoys is that you can’t carry as many in the same size decoy bag. Goose hunters have proven this bigger-is-better theory in an even more pronounced way—using decoys three or four times as large as a normal goose. Geese can see them from even further away but don’t seem phased by the size, even when they land in the spread.

If you’re new to duck decoys, each decoy you set out needs some kind of line attached to it and attached to an anchor, or weight, at the other end. When you put the decoy out in the water, the anchor sinks to the bottom and keeps your decoy from floating away. Decoy weights come in all shapes and sizes, and most hunters have a reason they like one type over the others. The best anchor weights are heavy enough to keep the decoys in place, but not so heavy that they make carrying the bag substantially harder. Good ones also generally have some design that keeps them from getting tangled easily. A favorite for many is strap-type weights—long pieces of lead that are malleable enough to wrap around the decoy’s neck or keel so it doesn’t tangle with other weights and lines when in the bag.

As mentioned, the line (or drop) attaches to the decoy and to the weight. In decades past, these were nearly always pieces of nylon line cut off a spool to the correct size. Stronger, more rigid kinds of line are the norm nowadays, and they have several advantages, including not fraying, being more waterproof and being much more tangle-free. Many are even rigged with swivels at one or both ends for attaching to the decoy and anchor, and some come pre-rigged with an anchor attached. One important thing to consider is depth. Most dabbling ducks are hunted with decoys set in just a couple of feet of water or less, so 3-foot lines work fine. If you’ll be hunting deeper water than that, use lines that are long enough to still allow your decoy good movement.

If you are going to hunt ducks in a serious manner, you’ll usually need at least two dozen decoys to start out. And more is better, since for waterfowl there is safety in numbers. Unless you throw your decoys in a boat and haul them around that way, you’ll need a good decoy bag or two for carrying them. Bags come in all materials and sizes, and large mesh ones are good for carrying a lot of decoys and draining well. Some come with individual compartments to place decoys. Whichever you choose, you’ll likely need more than a single bag. One important thing to remember: Always leave one decoy in the bag. If you don’t, once you put the last one out you’ll waste a lot of time looking for the bag, which probably sunk after you removed the last decoy!

Floating decoys are great at attracting ducks, and with a little wind even appear to swim back and forth like ducks do on the water. Flyer decoys add a whole new dimension to your spread, and often will help bring in ducks that wouldn’t have given your setup a look otherwise. In a nutshell, a flyer is mounted a few feet above the water on a post pressed into the ground. Its rotating wings make it look like a duck that is landing in the decoys, giving incoming ducks confidence to do the same. Flyer wings can be powered by the breeze (simple) or by a small electric motor (more complex, but more reliable). Of course, the motorized ones are more expensive, but many serious duck hunters believe they are worth every penny!

Feeder decoys, sometimes called “duck butts” resemble the rear end of a duck tilted up in the water feeding on vegetation. This is the way dabbling ducks feed, hence the name. One moment you’ll see the whole duck, the next, only its butt will be sticking up above the surface. Some feeder decoys are simple duck rears that float in the water and rely on wind and waves for movement. But electronic feeder decoys are available, too, that bob around and look exactly like a duck feeding. Add a handful of these to your spread, and ducks will be more likely to consider your setup a safe place to land—eventually landing them on your patio grill!

Rippler decoys are similar to feeder decoys in that they imitate a feeding duck. Ripplers, however, are full-bodied duck decoys in a heads-down feeding pose. These decoys are particularly helpful on calm days, when decoy spreads lay motionless and uninviting. Note that a single rippler decoy will work far beyond what you might believe its potential to be. Ripplers make ripples and waves throughout your entire decoy spread. That gives the spread more motion, further enhancing the illusion of a flock of real ducks on the water. Wily ducks that have already seen several lifeless spreads might just cup their wings and commit to your spread because of your rippler.

Since not all duck hunting is done over water, not all decoys are made to float. Many hunters successfully bag limits over corn and other feed fields, requiring a different type of decoy. Field decoys range from silhouette decoys, to windsock-type decoys to full-body styles. Silhouette decoys are fairly inexpensive, so many hunters can afford a lot of them, creating the illusion of a big flock. They aren’t quite as lifelike as other types, but numbers do matter. Windsock decoys are a little more expensive, but you can store many in a small space. Full-body decoys are the most lifelike, but are hard to store and transport, as well as being the most expensive kind. Starting with a combination of these different types is a good way to add numbers effectively without breaking the bank. Many decoys designed for use in the water can also be used as field decoys.

Most duck hunters, whether hunting over feed fields or water, are glad to bag a bonus goose or two if the opportunity arises and the season is open. Adding a handful of goose decoys to your duck spread will make it more likely that a goose might swing in for a visit, and it will also give ducks more confidence that the area is safe. For hunting over water, floating goose decoys work well, and in some cases a shell decoy or two on the shore near your duck decoys can yield results. When field hunting, add a handful of goose silhouettes, windsocks or shells bunched together at one end of your spread to attract lone or paired geese that might be looking for a larger flock.