A ranking of the greatest rounds for tagging a bruiser buck 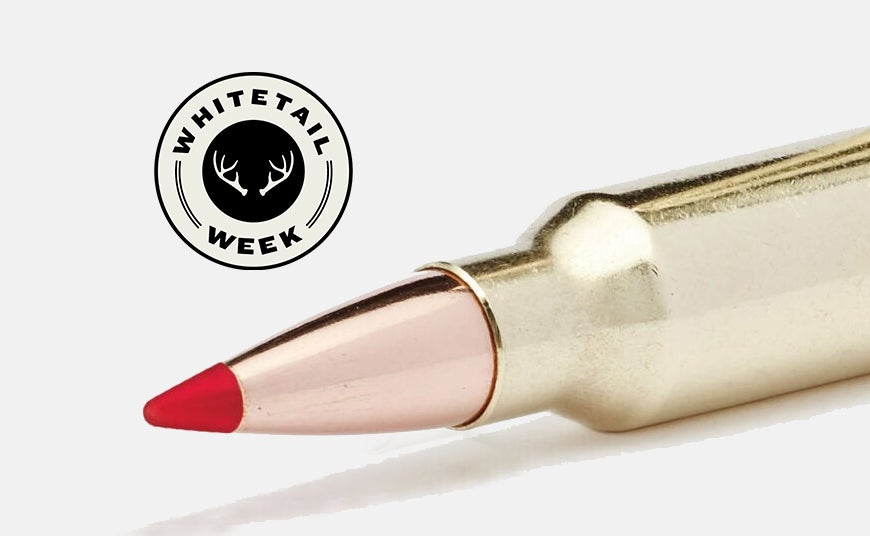 These cartridges have you covered for America's favorite big game animal. Hornady
SHARE

Consider for a moment the fact that, in 1914, James Jordan killed his 208-inch, number-two all-time typical whitetail with a Winchester 1892 rifle, chambered in .25-20 WCF. Delivering only 550 ft.-lb. of energy at the muzzle, the anemic .25-20 is far from ideal by today’s standards and is, in fact, now illegal for deer hunting in Wisconsin, where the Jordan Buck fell. Modern-day hunters enjoy vastly superior cartridge options, and it’s the duty of ethical hunters to use the ones that dispatch deer swiftly. Distance, bullet construction, shot angle, and the size of the animal all come into play when narrowing down the field of contenders. After taking more than 100 whitetails in dozens of states, I’m convinced that the 11 cartridges ranked below are the best at getting the job done.

This 140-grain bullet travels only at 2,465 fps and produces about 1,943 ft.-lb. of energy at the muzzle, and 1,501 ft.-lb. at 100 yards, but few deer live to complain about those numbers if shots are kept within reasonable ranges. In 1895, when this .30-caliber cartridge was introduced, it was the first round specifically designed for smokeless powder—30 grains to be exact—and it has been filling freezers ever since. The Winchester or Marlin lever-action .30-30 is perhaps the quintessential rifle and caliber for deep-woods deer hunting, where brush is thick and bucks are rarely taken farther away than a frisbee toss. Recently, modern ammo like Hornady’s Leverevolution has breathed new ballistic life into this old favorite. If kept at ranges within 150 yards, a .30-30 will get the job done every time.

The fact is that any factory-loaded .270 Winchester round will drop a deer faster than you can yell, Big buck down! Since its 130-grain bullet travels north of 3,060 fps to produce 2,702 ft.-lb. of energy, many hunters use it for elk and mule deer, so it can certainly handle 150-pound whitetails, too. The venerable round is ranked 8th here only because other calibers with ample energy for deer have shorter cases, making them better suited for smaller, lighter rifles than many of those chambered in .270. That said, if you needed a powerful deer rifle that can make most any shot, regardless of distance or angle, the .270 is a great choice.

Roy Weatherby’s darling, the .257, is one of the most powerful commercially available .25 calibers, and kills deer like a death ray. I once shot a Coues deer in Mexico at 50 yards with this hyper-velocity cartridge; no tracking was necessary. Trouble was, at that distance, few 100-grain, copper-jacketed bullets stay intact when they hit shoulder bone at 3,500 fps for 2,721 ft.-lb. energy. Fortunately, now hunters can choose a tough bullet, such as the Barnes TSX or Hornady GMX, that forgo such failures. I love the .257 Weatherby, despite its sharp recoil for a quarter-bore, and if it weren’t for the fact that only a few rifles are chambered for it and ammo tends to be pricey, it might top this list.

The .25-06 Remington was introduced in 1969 for deer-sized game and has a .30-06 case necked down to .257 caliber. With Federal Premium ammunition, it delivers a 115-grain Nosler Partition bullet around 3,220 fps, producing nearly 2,302 ft.-lb. of energy, and it is a solid long-range option that’s easy on the shoulder. It’s no surprise that this standard-length .25-06 cartridge remains a popular choice in open-country states, such as Arizona, Kansas, Oklahoma, and Texas.

Concocted in 1892 by Paul Mauser, this 7mm/.284-diameter round, with a 57mm-long case, fires a 139-grain bullet at 2,650 fps, generating 2,200 ft.-lb. of energy, which is more than adequate to tag any buck on this planet. As proof, William Bell used the round—albeit called the .275 Rigby when chambered in his Rigby rifle—to fell more than 800 African elephants with precise head shots. This Spanish military cartridge truly has it all: ample energy, relatively light recoil, high sectional density, great ballistic properties in its long-for-caliber bullets, and a rich history to boot. Frankly, if more American rifles were chambered for it, it would likely be as hugely popular stateside as it is in Europe. But many domestic ammo makers decided to make their own 7mm, short-action rounds—all copies of the 7x57 Mauser—and so it remains a cult favorite among American riflemen in the know.

Remington first mass produced this quarter-bore in 1934. The .257 Bob, as it’s known, was based on wildcatter Ned Robert’s design from a decade earlier and was a popular medium-size game caliber in its day. As a part of Hornady’s Superformance ammo line, it’s available with a 117-grain Nosler Ballistic Tip bullet, for consistent expansion, and travels at 2,945 fps with more than 2,253 ft.-lb. of energy at the muzzle. This translates to less recoil and longer life for your barrel. The round has a somewhat shorter range than the other high-velocity .25s listed here, but it’s no doubt effective. I’m not entirely sure why it’s not more popular today than it is, because it’s one of the best pure whitetail cartridges ever conceived. I can tell you one thing, though: The next rifle I buy will be chambered for this classic deer slayer.

I've taken more whitetails with the .308 Winchester than any other cartridge, and so it has to be one of my favorites. The .308 is easy to shoot, and every deer that I've ever hit with it has died immediately. Available in Winchester Ammunition's Ballistic Silvertip line, it's accurate, has plenty of energy (2,629 ft/lb.) for even the longest shots, and the light recoil for a .30 caliber. What's more, .308 ammo runs cheap and can be found virtually anywhere in the world, thanks to its 7.62 NATO designation. But, because it's so common and everyone knows it works so efficiently, it's lost some of its sexiness. Still, for large bucks—especially when hunting from a treestand—the .308 Win. is one of the best whitetail rounds ever. Period.

For many American hunters, the .243 Winchester is the end-all whitetail round. And for good reason. It can handle all but the most extreme conditions, and its 100-grain bullet travels at 2,960 fps to produce 1,945 ft.-lb. of energy at the muzzle. If you don't think that's enough juice for deer, then you likely haven't shot a .243 much. It simply works. Just be sure to use a premium deer bullet that will hold together yet expand, such as Federal's Trophy Copper or Nosler's Partition. An excellent cartridge for children thanks to recoil under 10 ft.-lb. energy, it's nearly perfect for deer, provided shot placement is good and ranges are reasonable. Though it might not be the cartridge of choice for Saskatchewan hunters shooting across long alfalfa fields, it is ideal for the vast majority of American deer hunters.

RELATED: Affordable Deer Rifles: 10 Options for Less than a Grand

The 7mm, or .284 diameter bullet, is, in my estimation, the best caliber for deer of all sizes, under all conditions—which is why it deserves the top spot on this list. It has innate ballistic properties, and its short-action case, which is a necked-down .308 Win., fires its 140-grain pill at 2,770 fps, resulting in 2,386 ft.-lb. of energy. That is plenty of speed and energy for deer as far as the eye can see. It's also a comparatively light-kicking round. It yields only about 17 lb. of recoil in my featherweight, 6-pound Remington Model 7; I could shoot it with one hand from a treestand if I had to. I prefer the 7mm-08 over the 7x57mm Mauser for its extra 150 fps, and perhaps because of its American origins. All told, the 7mm-08 Remington strikes the perfect balance between deer-dropping power and easy of carry and shooting, making it my all-time favorite cartridge for the deer woods, no matter the condition.

Our list has a new No. 1, and as much as it pains me to say so, it’s the 6.5 Creedmoor. When we first posted this story, the Creed was still fairly new, still primarily a target round, and still somewhat unproven on game. That’s all changed. The round’s sheer popularity has persuaded every major ammo maker to produce it; as of October 2021, Midwayusa.com offers 96 different loads, many of which now specifically target America’s favorite game animal rather than 1000-yard targets. New 130-grain hunting rounds, like Federal’s Barnes TSX loading, exactly nail my ideal-whitetail-cartridge criteria: A high-BC, 6.5mm, 130-grain hunting bullet launched at roughly 2800 fps for around 2300 ft/lb. muzzle energy while only producing 13.5 pounds of recoil from a short-action, 7-pound rig well-suited to treestand hunting is perfection for whitetails from 5 to 500 yards. That’s why the 6.5 Creedmoor is my new No. 1. And with so many offerings, you can fine-tune your 6.5 to your specific needs. After little Florida deer across wheat fields? Swap the 130-grainers for 120-grain SSTs or the like. Got brutish Minnesota bucks in the hardwoods, where 25-yard shots are standard? Chamber 140-grain TSXs or AccuBonds.

Don’t get me wrong, my BS-O’meter still spikes whenever a Saturday-sniper-type tells me his new 6.5 Creed is the best cartridge ever made for everything. It’s not. But for whitetails, virtually anywhere you hunt them, you can’t do better.

6mm Remington: Faster than a .243, but tougher to find ammo.

Get out your pitchforks, but don't bother perusing this list again because you still won't find the .30-06. I love this old, proven slayer of game, but a perfect whitetail cartridge it is not. Its long action isn't easily made in compact rifles built for treestands. Its bullet’s energy, while impressive, is more than what’s needed for deer, and it comes with the cost of added recoil. Sadly, it's just not sexy anymore. Everyone knows the .30-06 works wonderfully on all game, but I’m sacrificing it in order to inform readers of other cartridges that are better suited for deer.

What You Want in a Whitetail Cartridge

Sure, you can drop a deer with a .223, but that doesn’t mean it’s the best dope for the job. Same goes for plodding .44-caliber handgun rounds and overkill .300 magnums. Rather, the ideal blend of bullet energy (for quick-killing trauma) and mild recoil (so it’s easy to shoot well) for thin-skinned ungulates from 100 to 250 pounds is a .24- to .284-caliber bullet weighing 120 to 140 grains going 2700 to 3000 fps. Preferably, that bullet is fired from a short-action, uber-efficient case designed for a high-BC projectile that’ll make the rifle handy in deep woods yet also deadly across open country. Those parameters go a long way to explaining my top three choices—the 6.5 Creedmoor, 7mm/08, and .260 Rem. There are plenty of other good whitetail rounds that might meet your specific needs or preferences (just look at the rest of the list). But if what you are after is the perfect all-around deer cartridge, just pick from the win, place, and show options above. —Jeff Johnston