Twenty-seven suggestions for the hunters and anglers on your list 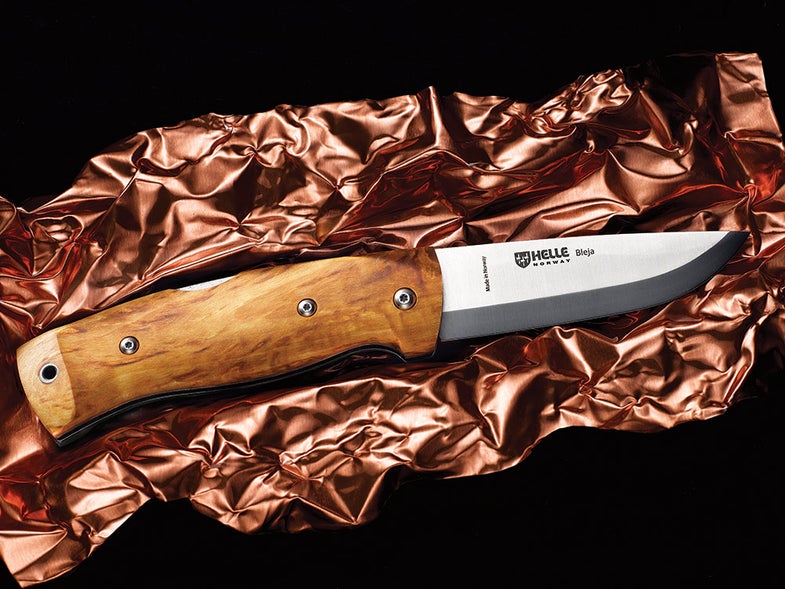 Being an outdoorsman is hard work. Like, really hard work. We wake up and hit the road hours before dawn, then venture into some freezing duck marsh, treacherous trout stream, or rugged whitetail wilderness—all for a chance to put some food on the table for our beloved family and friends. That’s how much we care. No, we’re not looking for applause. But if you do, by chance, want to show some gratitude for all our sacrifice and hard work this holiday season, here are 27 gift ideas that’ll do the trick. Really, it’s the least you could do.

I shot a pronghorn at 300 yards using this scope, and tested it on the range to 700 yards. It worked flawlessly. At this price, you don’t expect perfectly repeatable adjustments—but that’s what you get, along with locking turrets and a parallax adjustment. A killer deal. —Dave Hurteau

After a long day of flyfishing and filming, I crashed this little quadcopter into my buddy’s 5-weight. The tangle was instant, and the splash was hard. About a half gallon of water poured out of the battery compartment, but after a 24-hour dry-out, the Karma flew again. It’s tough, compact, and fun as anything—perfect for sportsmen and boneheads alike. The controls are easy and don’t require an iPhone or iPad to fly. Plus, it’s compatible with the new Hero6 Black, which shoots in gorgeous 4K at 60 fps. —Michael R. Shea

The Crux is arguably the finest line of fly rods Redington has produced to date, which is saying something. Its special tapered design delivers maximum-distance casts and nearly effortless short-range presentations. It’s available in weights 3 through 10; the 9-weight I tested had both excellent tip sensitivity and lots of backbone. An extra-dense cork handle also does a nice job upping comfort and durability. I can attest to the value of these upgrades, as I put in plenty of time this past fall casting my Crux at river bowfin, offshore albies, and back-bay stripers. —Joe Cermele

Outdoorsmen have grown accustomed to shelling out serious dollars for high-end ice chests. Though Maluna isn’t exactly giving away its wares, they’re reasonably priced and retain ice for up to 20 percent longer than some of the big-name competitors. The key is a floating hinge combined with both front and back tension straps that create a ­supertight seal around the entire perimeter. This 40-quart model holds about 36 beers and can take a fair amount of abuse. —JR Sullivan

If you need a snub-nosed .44 magnum, get this one. Built on Smith & Wesson’s L-Frame and now available with a 23⁄4-inch barrel and adjustable sights, this stainless-steel five-​shooter is just 34.4 ounces—easy to pack in a hip holster for bear country. Recoil is vicious with magnum loads, but the gun is a ball to shoot with .44 Special ammo, with which it’d also be a decent home-defense gun. —Will Brantley

Not only have these broadheads flown well from every vertical bow and crossbow I’ve hunted with, but they’re also sharp and cut huge holes. Last fall, on a Wyoming whitetail and antelope hunt, five of us killed 10 critters in 10 shots with the Extreme COC. None of the animals made it out of sight. —W.B.

Serious hunters need a meat-­eating grinder, one that will chew through shoulders and shanks all day without a hiccup. The ­commercial-​grade .5-hp Carnivore quietly engulfs the toughest cuts, while an ice pack wrapped around the neck keeps meat cool to prevent binding and sticking. Comes with a lifetime guarantee. —D.H.

The 3D Bat is the latest of Savage Gear’s crafty topwater lures. Everyone loves topwater explosions, and this lure is intended to elicit reaction strikes from bass, muskies, and pike. The combo of moving aluminum wings, a side-to-side walking action, and an internal rattle creates lots of commotion. It is available in 1- and 2-ounce models and in three colors. —Mark Modoski

The sleek and tough new Spectrum LT has a futuristic look, thanks in part to its ­aerospace-grade-aluminum components. The 20-point drag knob affords precise tension control; I found it had no trouble handling both Boundary Waters smallies and big Montana rainbows. Or for $100 less, try the standard Spectrum reel. —J.R.S.

If your chores include hauling food-plot fertilizer, tree­stands, dead deer, or cases of granddaddy's hill-brewed firewater, this trailer will come in handy. It has a 1,000-pound payload capacity and, best of all, a hydraulic piston-­assisted lift bed that swivels. I've not seen a better compact trailer. Convert it to a wheelbarrow with a $150 kit. —W.B.

Of all the apparel I've tested, this breathable hoodie is a favorite. Its quick-dry polyester blend makes a good outer layer during the intermediate seasons and a comfortable base once the temps plunge. I wore it on a recent float trip, and it kept me warm in the mornings but didn't bake me once the sun, and the trout bite, heated up. —J.R.S.

This is proof that a working gun for hardcore duck hunters can have a ­Cerakote finish and camouflage stock, yet maintain the classic lines of a fine fowling piece. I used one during a three-day barn-burner hunt in Sas­katche­wan last fall and couldn't find a single thing to complain about. It comes with three custom choke tubes and a 100,000-round/five-year guarantee. —W.B.

With an 18-inch barrel, a synthetic stock, Picatinny-rail scope bases, and a detachable 10-round magazine, this compact version of the legendary BAR in .308 could make a dandy multipurpose truck and defensive rifle—but I think it's at its best as a serious whitetail and hog gun. Operated by a gas piston, it weighs just over 6 1⁄2 pounds. When it comes to handling, there's no comparison between it and even a lightweight AR-10. —W.B.

Calling this a timepiece sells it short. The Traverse Alpha boasts a reliable GPS navigation system that lets you mark locations. It also has step-counting, trip-planning, and shot-detection features and tracks barometric pressure, weather patterns, and moon phases. Head off the grid with it, and you couldn't get lost if you tried. —J.R.S.

Carry 8 ounces of your favorite spirit in this stainless-steel, BPA-free flask, which has a tough laser-welded body and a hinged screw-on cap. It's wrapped in the stunning colors of a digitally imaged brown trout from noted Florida artist Eric Estrada. —T. Edward Nickens

Whether you're battling Great Lakes salmon or Louisiana redfish, these ultra­light­weight shoes are at home on sloppy, wet boat decks and docks. The GripX Wet Traction sole and 360-​degree drainage make these prime to be punished and keep you upright while you're delivering that punishment. They dry fast, won't stink, and have exceptional support. —J.C.

Durable yet reasonably priced, this soft-sided cooler has a water-­resistant zipper, heavy-duty aluminum hardware, and a built-in bottle opener. It can retain ice for up to 72 hours. It was my go-to cooler all summer, and I expect to get a lot more use out of it. —J.C.

This folder brings modern materials to a classic design. The old-school slip-joint mechanism is hinged to a corrosion-resistant CPM-S30V steel. Handle options include a dark red G10 or olive ­Micarta scales. —M.R.S.

Prescription for shooting at long range: Use a heavy bullet with a high ballistic coefficient. That is what Winchester has given us in this new line of ammo. In 6.5 Creedmoor (shown), it sends a 142-grain AccuBond bullet on its way at 2700 fps. Since the bullet's BC is .719, it keeps much of that speed. —David E. Petzal

What deer hunter doesn't want ­another trail cam? This new sub-­micro model is fast, takes great pics and video, and features a viewing screen and adjustable mounting bracket. It will run for the whole season on lithium batteries—all at a midlevel price. —D.H.

Like many pieces in Patagonia's new Workwear line, this jacket is made from the company's trademarked Iron Forge Hemp canvas. I'm not exactly sure what that means, but it sure is tough, warm, and damn comfortable. Looks sharp, too. —Colin Kearns

Despite the fact that the Bleja—a big, strong lockback that's neither clunky nor heavy—comes from a Norwegian factory, it's largely a handmade knife. And though intended for everyday use, it will do fine for hunting. It sharpens with ridiculous ease, and you can put an edge on it so keen it's probably ­illegal. —D.E.P.

You can't beat the cool factor of this new folding AR. That's right, this 5.56 carbine has a hinge where the receiver meets the handguard, allowing easy storage and concealment. It deploys in less than five seconds. A heavy-duty latch holds the fore-end, and the XAR's zero, firmly in place. —David Maccar

The first men's wading boots with Boa lacing hit shelves in 2007, and now, the first women's pair is finally here. What's so great about the Boa dial-tightening system? No more cold fingers fumbling with shoelaces. Instead, just crank the dial to tighten and secure the boots. Then, after a day of fishing, simply pull the dial to shuck them off. It doesn't get easier than that. —Kris Millgate

Whether you need to keep clothes dry on a backwoods float or protect camera gear during an offshore tuna trip, the new Yeti water­proof duffels stay as arid as the Sahara inside, no matter how wet things get. A hard nylon shell and a rugged sealed zipper make the Panga, available in three sizes, fully submersible. Best feature: The strap system lets you sling the bag or carry it like a backpack to keep your hands free for casting. —J.C.

A great choice for new shooters, the Super X4 features a proven, soft-shooting gas system that handles a huge range of shells reliably in the field or on the range. A slim stock and fore-end fit any hands, and you can adjust length with the included stock spacers. At just under 7 pounds in 12 gauge, it's light enough to carry, yet heavy enough to shoot well. —Phil Bourjaily

If you're anything like me, you know the knife, pliers, or shears you had just one second ago can suddenly disappear. The Tackle Center aims to fix that. This storage system fits in most boat and kayak cup holders, and its core of thin, tightly packed plastic rods securely holds your tools, bringing organization to your fishing trip. A net fastens over the top to ensure nothing comes loose when you're under power. —J.C.