10 items for any long-rodder on your holiday shopping list 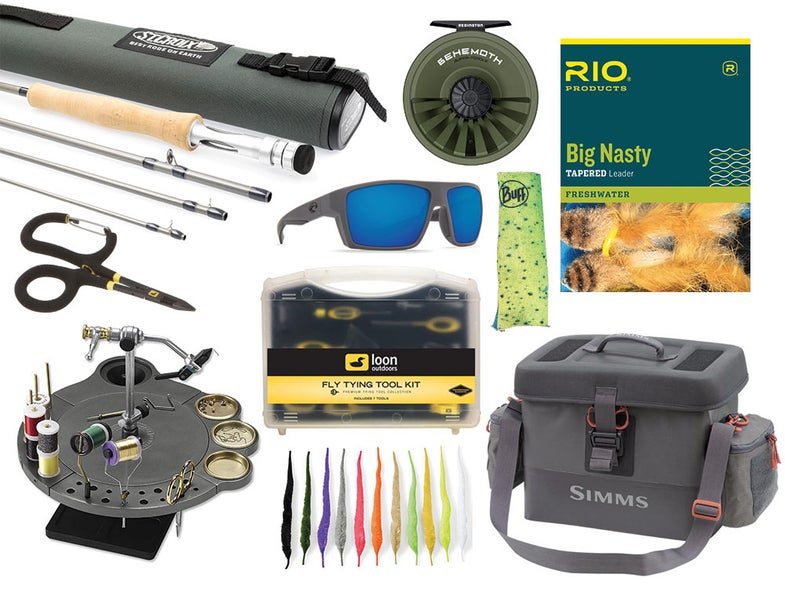 People ask me questions about the fly gear I use all the time. Believe me, I’ve used tons. Every angler, however, has at least a few pieces in their arsenal that stand out, or come to be relied upon more than others. If you need to shop for a fly angler in your life, here are a few of my most trusted pieces of gear, tested and retested during fly pursuits all over the country. There’s something for every budget and skill level on my list of go-to equipment.

Designed with input from legendary streamer guru Kelly Galloup, the Bank Robber was arguably the first fly rod developed specifically for the streamer addict. I couldn’t wait to get my hands on one when they hit the scene, and even though some comparable rods have come out since, I still lean on my 7-weight Bank Robber more than any other streamer stick. It casts heavy sinking lines like a dream and has excellent sensitivity when working big flies. Mine has gone into battle with me on trout streams the country over more times than I can count.

Some might say that a pair of forceps is a pair of forceps. They’re all created equal. Not me. Ever since I got a pair of Quick Draws, we’ve been inseparable. The built-in carabiner clip stops me from losing them like I’ve lost most other pairs of forceps, and the extra-wide finger loops with non-slip grips make the tool easy to use even with gloved hands when chasing steelhead or late-season browns.

Without a doubt, the TyWheel is my favorite fly tying accessory to hit shelves in the last few years. Compatible with nearly any vise, this tying station is magnetized, which means everything from scissors to the tiniest dry fly hooks stick to it. Read that: “no more rooting around the floor for dropped hooks.” Four trays—including a tool holder and spool holder—can be configured around the wheel however you’d like, making this the ultimate customizable workstation.

The beauty of this boat bag is the magnetized catch-and-release lid, which allows quick access to your kit, but also secures automatically when you simply drop the lid. It’s perfect for changing flies and re-rigging in the heat of the moment when the drift boat is fast approaching a juicy piece of water. The bag is also smash- and splash-proof, helping to keep everything inside dry and safe.

Not only is the Behemoth one of the toughest, most reliable fly reels I’ve ever fished, it’s also one of the most reasonably priced. This die-cast tank features a unique V-shaped spool that collects line smoothly and evenly. The Super-Torque drag has beaten everything from speed-demon false albacore to monster pike for me over the years. If you’re a fan of funky color over traditional black or gray, the Behemoth was just released in OD Green this year. The Behemoth is arguably the best big-fish reel you can buy for the money.

If you haven’t been tying with Dragon Tails, you’re missing out. These chubby snake-like chenille creatures have taken the streamer game by storm, as they provide a fast, easy way to make baitfish imitators that swim with a natural shimmy no other material can match. There is—quite literally—not a single species of large gamefish I’ve found that will pass up a Dragon Tail streamer. From mahi-mahi, to brown trout, to pike, to smallmouths, they just get ate. Period.

If you’re in need of some fresh tools at the tying bench, I can’t say enough good things about Loon’s new kit. It comes with two pairs of scissors, a bobbin, a whip finish tool, hackle pliers, a bodkin, dubbing spinner, and a dubbing brush. Each tool features an extra-thick handle for comfort and a better grip, and each of those grips is bright yellow so you’ll see them when you put them down among the chaos of your work—assuming you’re not organized like me when you tie.

Here’s a great stocking stuffer for the fly guy or gal that lives to throw meat flies at trout or foam bugs at bass. RIO’s Big Nasty tapered leaders are made from a stiffer-than-average material that provides extra oomph for turning over heavier, bulkier patterns. I was skeptical that these leaders would make a presentation difference when I first tried them, but I can attest to smoother turnovers and accuracy, even in windy conditions.

I must admit, when these stripping guards first hit the market, I scoffed at them. Then I tried them, and realized that they’re much more efficient than using medical tape like I had been for years during all-day streamer stripping sessions. You barely know you have them on, they stay in place, and when they get funky I can toss them in the laundry. These days, if I end up on the river without them, I freak out. They’ve become as critical to a streamer day as my selection of sink tips.

I’ve got a big head. Sunglasses love to slip off that big head. Costa’s Blokes are one of the few pairs that don’t, and that’s totally by design. They are, after all, made for blokes with big heads. Extra-wide frames fit my face beautifully, stopping any and all sunlight penetration from the sides. Couple the design with the Hydrolite nose and temple pads, and the Blokes won’t move no matter how sweaty you get. Not too mention, Costa’s lenses are second to none in terms of cutting glare and helping you spot anything from bait schools to posted-up trout and muskies.