The 28 Gauge and Square Loads

28-gauge shotguns pattern well thanks to a "square" payload. Only thing is, the payload isn't square at all 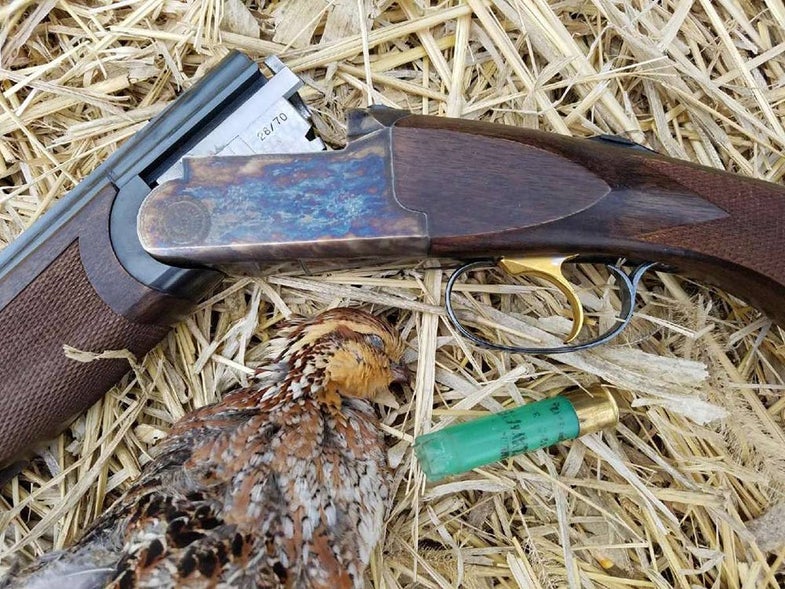 Loading a 28-gauge load up to 1 ounce will offend purists—but it will put more pellets on your target. Phil Bourjaily
SHARE

The 28 gauge patterns efficiently because its ¾-ounce payload is “square” (inasmuch as anything packed in a cylinder can be square), according to conventional shotgunning wisdom. Theoretically, the 28’s squareness results in less-deformed shot, because as the payload accelerates, there’s less weight on the pellets at the bottom of the stack, so they stay round and pattern well.

Except it isn’t square. “Square” means the shot column inside the hull is as wide as it is tall. Or, if you’re talking about blackpowder, it means equal volumes of powder and shot. Under neither of those definitions is the 28 gauge is square.

The 28 has a bore diameter of .55 inches and a shot column that’s about an inch in height, and “volume of black powder” isn’t a useful metric anymore. The 28 is a rectangular load, if there is such a thing. And, given improvements in shot that resist deformation and wads that cushion shot and protect it from scrubbing by the gun barrel, the idea of a square load may not matter as much as it used to.

Squareness aside, a lot of people are convinced the 28 gauge is magic anyway. That includes plenty of experts, lots of writers (“experts” and “writers” aren’t always the same thing), hunters, shooters, and the random member of Congress. I once received a call out of the blue from Representative Lamar Smith of Texas, himself a quail hunter, encouraging me to write about the miraculously efficient patterning properties of the 28 gauge.

When I asked the engineers at Federal to test the 28 gauge’s efficiency against the other bores, what they found instead was an almost linear relationship between bore size and pattern efficiency. To way over-simplify their findings: The bigger the bore, the better it patterned, and we could discern no magic .55 inch, ¾ ounce payload relationship. Shot strings weren’t any shorter, either. It was like dissecting a unicorn and finding out it was just a horse with a growth on its nose.

Yet in the field, the 28 does seem magical. Years ago, I was invited to shoot with a bunch of top DNR officials and the governor at a preserve near Des Moines. For some reason, the big shots went home shortly after I arrived, leaving me alone and all dressed up in the new brush pants I had splurged on for the occasion. The preserve owner’s son took pity on me and said, “The birds are all paid for. You want to go shoot them?”

I had brought my 28-gauge Red Label and my favorite load for it—Federal’s premium ¾ ounce of copper-plated 7 ½s. I shot a lot of pheasants—I mean a lot of pheasants—that day. Some of them flushed a little wild, yet I don’t remember any of them hitting the ground alive. That’s been my experience with the 28 on wild pheasants, too, so long as I keep my shots to 30 yards or less. Smaller birds, it goes without saying, fall dead, too.

Loading the 28 up to an ounce offends 28-gauge purists. It’s even less square and therefore not as efficient as a ¾-ounce load, but it still will put more pellets on target than a ¾-ounce load will. It makes a good option for those who want a 28 as their only smallbore, whether its loads are square or not.