When bucks lock down in heavy cover, it's time to change the gameplan 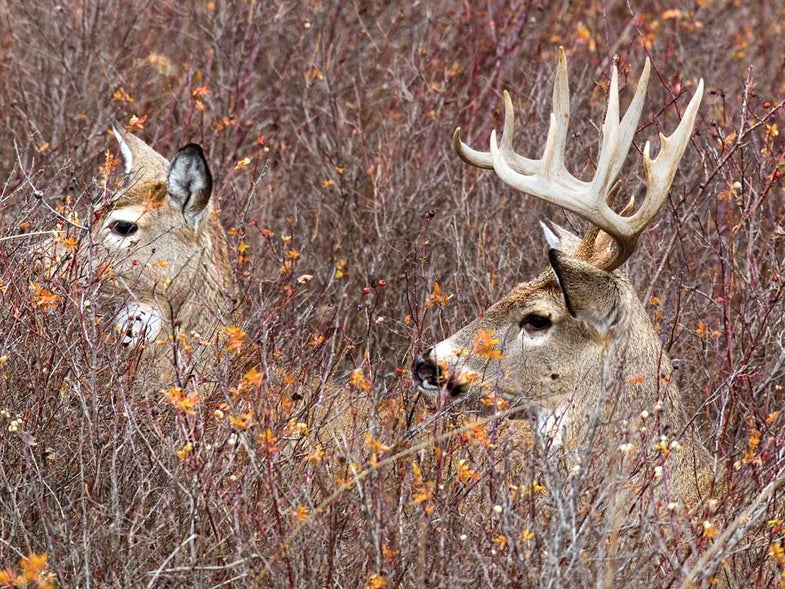 The Hideout: A Montana buck in cover with a doe.. Donald M. Jones
SHARE

In early November, those just-out-of-bow-range bucks seem to be everywhere—and you just know you’re going to kill one as soon as you can carry a gun to your stand. Then dawn breaks on opening day of firearms season, and you can’t spot a rutting buck to save your life. Peak breeding, also known as the lockdown phase, often happens during firearms seasons in mid to late November, when hunting pressure makes bucks tougher than ever to find. Stop watching empty trails from stands that were hot a week ago, and try one of these tactics instead.

I played cat-and-mouse with a gorgeous 12-point for an entire bow season a while back, waiting for him along scrape lines, feeding areas, and terrain funnels. When lockdown arrived I decided to go looking for him on a cedar ridge where I knew he loved to bed. With the wind in my face, I still-hunted to the ridge end, dropping to one knee every three steps to peer into the thick stuff. After 45 minutes I spotted the twitching ear of a doe…bedded right next to my monster. I was just prepping for the shot when she busted me and blew downhill, taking her boyfriend with her. Had I spotted her a second earlier, I’d have had time to thread a shot into the shoulder of that dandy buck.

My friend Tom VanDoorn hunts the public big woods of northern Wisconsin. One of his favorite moves during gun season is to sneak into a swamp (which offers top security cover for bucks that are tending does or trying to escape hunting pressure) with a partner. “I have my partner hang a stand,” he says. “As soon as he is settled in, I go off 50 to 60 yards and make a slow circle around him. Then I do it again, widening the next loop by about the same distance. Any buck I jump as I’m moving along—even if he’s ­bedded with a doe—usually runs a short ways, and then circles back. Often, my buddy will get a shot when we do this.”

Whitetail expert Tim Herald likes to rifle hunt the broken farmland and prairie of Nebraska, Kansas, and the Dakotas. He uses the open terrain to his advantage, settling on a high point overlooking one or more creek drainages. “If I’m lucky I’ll spot a buck on the move,” he says. “But I’m ready to pick apart cover with a good binocular to glass for something as small as a twitching ear or a tine. When I spot a breeding pair, I mark their location and plan a stalk. When I’ve worked into range, I prop my rifle on a shooting stick, then grunt or whistle to get the buck to stand up. Having that rifle shouldered is important because when a buck stands, there are only seconds to shoot.”