The ’06 remains highly versatile, but its best use now is for truly large game 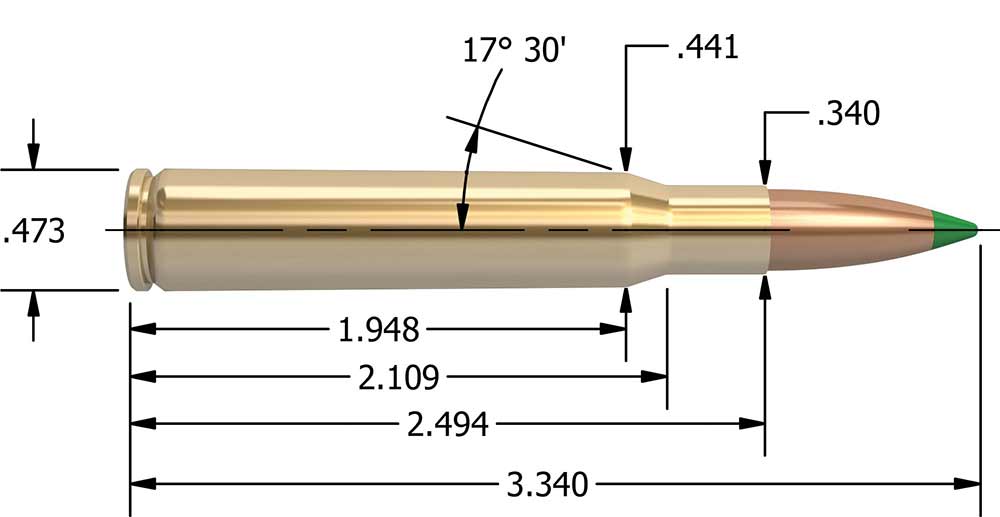 A diagram of the .30/06 Springfield case dimensions. Nosler
SHARE

In a sense, the old warhorse has come full circle, if I can mix my metaphors. If you read the issues of Field & Stream that were published between the War to End All Wars and the Last Real War We Won, the .30/06 was regarded as a veritable cannon. This was caused, at least in part, by the fact that millions of young men who had never fired a rifle before were introduced to firearms courtesy of the ’03 Springfield or the M-1 Garand, and as far as they were concerned, those rifles kicked.

Then came the post-WWII magnum boom, and anything that didn’t detach your retinas and burn 80 grains of powder was considered effete. The ’06 was regarded by many as outdated, and underpowered; the tool of the unsophisticated and simple-minded.

(Perhaps the apogee of this thinking was the late gun writer Bob Hagel, who regarded using a non-magnum cartridge as one would the molesting of domestic livestock. Hagel was the real deal; he had done a ton of North American hunting, but all in the West, and Alaska. And, of course, there was Elmer Keith.)

Now, we’ve apparently come full circle again, courtesy of the .223 and the wonder child of the 21st century, the 6.5 Creedmoor, both of which are small and modest. I suspect that Snowflakes and Millennials of all stripe regard the ’06 as something horrific.

I think this great sea change has been brought about by the enormous improvement in game bullets, and in powders. Both are force multipliers that turn your ’06 into the very near equal of a .300 Win Mag. Except the ’06 does its job with a lot less recoil, and who in their right mind wants to get kicked?

If I were going to Africa again, I’d take, as my medium rifle, a .30/06 handloaded with 200-grain Swift A-Frame bullets at 2,600 fps. The A-Frame is the apogee of controlled-expanding bullets. At that speed, it will expand to .60-plus and retain something like 95 percent of its weight. It can shoot through two okapis, a dik-dik, and kill a blue wildebeest on the far side.

It reminds me of a great deal of the .318 Westley Richards, now almost forgotten, but once a standard of African hunting. The .318 was introduced in 1908, and fired a 250-grain bullet at 2,400 fps. It could be chambered in inexpensive rifles like the Model 98 Mauser and the P-14 Enfield. It was inexpensive compared to the .375 H&H, kicked far less, and had a reputation for exceptional penetration, which is what African hunters value above all else. If you read Robert Ruark’s novel Something of Value, the McKenzie family is forever grabbing .318s and bashing something, and Ruark was an accurate observer.

The .30/06 is still one of our great all-around calibers. But I think its true place now is as a round for those who want to take genuinely big animals without going to see an orthopedic surgeon afterward.

This is subjective. What is truly large game? How much recoil can you take before you’re kicked silly? With that in mind, let us proceed:

7×57 Mauser. Yeah, I know, it’s a little bitty cartridge, but the fact is that it’s killed everything, and I do mean everything. If you’re going to use it on big stuff, the only bullet to consider is the 175-grain. If you really, most sincerely, do not like recoil, and can shoot accurately, here’s your huckleberry.

The .325 Winchester Short Magnum. It has substantial punch, a nice, hefty bullet, and can take just about anything short of Cape buffalo on which it’s not legal anyway. For whatever reason, it seems to kick a lot less than the .338.

The .318 Westley Richards. The bullet is actually .330 diameter, and the load you want weighs 250 grains. Think of it as a .338 minus 200-300 fps. For a long time it was highly popular in Africa, and was used successfully on everything.

The .404 Jeffrey. And this one you can think of as a .416 Rigby minus 200 fps. It uses the same 400-grain bullet, but with a lot less recoil and substantially more thump than a .375 H&H. The Jeffrey has been around forever, has been rediscovered in recent years, and is enjoying a revival among those who don’t enjoy getting their brains scrambled.

The .480 Ruger. I’m not a fan of handgun cartridges for big game, but if it’s positively necessary to your Life Plan, this one offers a lot more power than the .44 magnum without the hand-pulping recoil of the .454 Cassull, or either of the two monster S&W handgun rounds. The .480 achieves this magic via heavy bullets and comparatively modest velocity. You can shoot it without your shrieks of pain scaring everything within 15 miles.