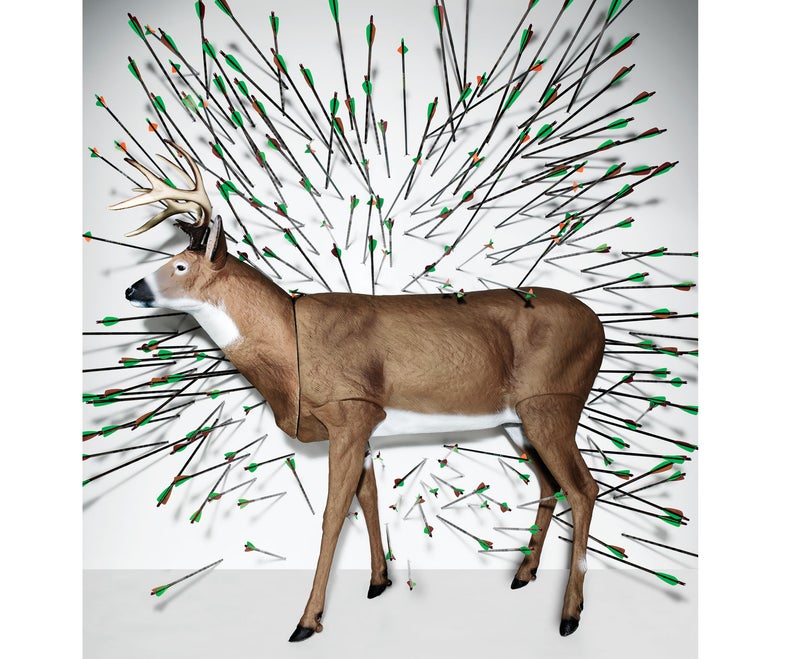 Yes, today’s ultrafast, super-smooth-shooting bows can make it easier for moderately skilled archers to rack up 10-rings—on the practice range. And today’s best-known pros virtually never miss—on TV. But fancy gear doesn’t take the lump out of your throat when a giant buck is right under your stand. And while I know some celebrities who  can flat-out shoot, I also know some video editors who can make an errant arrow go right where it’s supposed to. In the field, there are  certain shots anyone can miss. Here are five, and how to handle them.

A shooter buck bombs in and stops not 10 yards from the base of your tree. You put the top pin on his vitals and shoot…and watch your arrow sail over his back.

The Problem: First, you likely never practiced this shot. Second, the extreme angle distorts your form. Third, you probably sighted in your new bow so you can use the top pin out to 25 or 30 yards, which is fine, but it hits high at very close range.

The Fix: Practice chip shots from an elevated platform: Draw the bow as if you’re going to shoot at the horizon, then bend at the waist until you’re on target. And if you use one pin out to 25 or 30, aim slightly lower than your gut tells you.

A good buck walks past your stand and presents the perfect quartering-away shot. You stop him, shoot, and watch your nock disappear behind the shoulder. If you were a TV star, you’d face the camera and fist-pump. But you never find the deer.

The Problem: The arrow cut through hide and meat, and maybe skipped along bone, but you never hit anything vital. I lost a dandy buck this way just a few years ago. I thought I’d aced the shot, but my arrow merely sliced through the deer’s armpit and out his brisket.

Your plain-Jane rangefinder says the buck side-hilling the slope beneath your stand is 25 yards away. But the commercials for the new rangefinders have taught you that the true horizontal distance is less than that. You aim low…and miss low.

The Problem: You overcompensated. With today’s blazing bows, unless you’re shooting beyond 30 yards and off a veritable cliff, forget the Pythagorean theorem—and whatever you do, don’t hold out of the vitals.

The Fix: The new rangefinders are great. But if you don’t have one, just pick a tree along the downhill trail and zap it at a point level with your stand, rather than at ground level. This eliminates the steep angle, and as a result your old-style rangefinder gives you the true horizontal distance. Use that for aiming.

From your stand, you watch a buck bed in a crop field and decide to put a sneak on him. When you think you’re in bow range, the buck stands and begins quartering away. No time to range him—you judge the yardage and shoot…and the arrow cuts grass beneath his belly.

The Problem: It’s classic range-estimation failure. For those of us who typically hunt from a treestand (and that’s most of us), eye-level deer in open country are invariably farther away than we think.

The Fix: You should practice range estimation in both open and wooded cover.

Read Next: How to Hunt Big Bucks in Hot Weather

Your buck is standing broadside, well within range. Yet something doesn’t feel right. You shoot and whiff.

The Problem: Today’s equipment is so good that shooting accurately is largely a mental game. If you’re not confident that you’ll make the shot, you’ll likely miss.

The Fix: On the range, learn what it feels like to be in the zone—and out of it. When the latter feeling pops up during a hunt, pull the plug on the shot. Errant arrows are a learning tool during practice; the deer you might maim with an ill-focused shot isn’t practicing anything.