Bulls at the Wire

After a Colorado elk hunt gets off to a slow start, any hope for ­success comes down to the final minutes of the last day 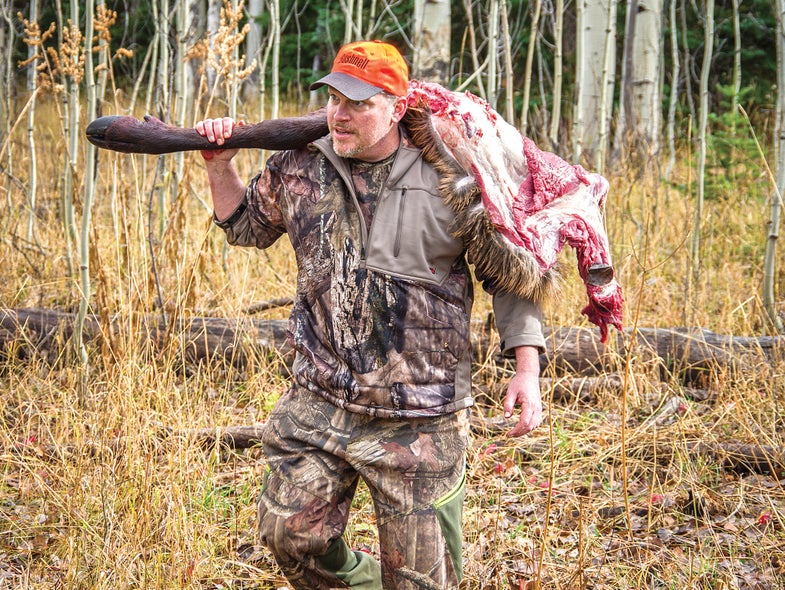 Straight ahead, 500 yards down a fenceline cut through the aspens, a nice 5×5 bull lay bedded. We had spent the day straining our eyes, hoping to glimpse an antler or a rump patch. Now, with an hour of daylight left, this bull was so impossibly obvious—sitting atop a knoll, coat glistening in a patch of sun—that we almost didn’t notice him.

That’s when I recalled the game plan.

It was opening day of Colorado’s elk rifle season. Jake Edson, with Vista Outdoors, and I were hunting with Moline, a guide for Ivory Tip Outfitters (see sidebar below) in Craig. We were working several private properties nearly surrounded by public land; if we hunted cautiously and didn’t risk bumping elk off of our hunting area, then the public hunters would eventually push a bull or two into our laps.

At least, that was the plan.

So we backed off maybe 75 yards and set up on a timbered bank overlooking a meadow creek to try and call the bull in. With two hunters to a guide, only one of us could be the primary shooter, and as I was up first, I took the lead, with my rifle pointed in the direction of where we’d last seen the 5×5. Moline started in with a few chirps, then went to long estrous calls that carried across the drainage to the far slope, where scattered aspens stood as white pillars. Beneath them, all around the gleaming trunks, sprawled fields of timothy and crested wheat. Just in front of us, the creek widened to a pond, the water muddied and the bank pocked deeply with elk tracks. It was the kind of place where you expect an elk to show—and soon one did. But not the 5×5. Instead, a lone cow crossed the meadow from the far side, forded the creek, and stopped at just 8 yards, staring at us until something finally clicked and she backed away. The whole time, we expected to see the bull slipping in from behind. But he never showed.

The next morning I told Edson that it was his turn to be the primary shooter. As my host on this hunt, I knew he would refuse, and he did. Normally that would be fine with me, but this was a little different. Earlier, on the drive to camp, I’d caught Edson staring out the car window to the mountains in the distance, obviously dreaming about elk. “I’m so pumped for this hunt,” he’d said. “I’ve never killed an elk before.”

We saw only spikes and cows over the course of that long second day, and more of the same the next morning. I was feeling more and more guilty about Edson’s deferring to me. At lunch I pressed again. “Come on, man,” I said. “You’re not going to kill your first one by watching me hunt.”

“Nope, I’m good,” Edson said. He seemed totally unconcerned. “I’ll tag out right after you do.”

On day three, we called to a pair of distant bulls that came in partway but then faded off. Midway through the last morning came the sense that it might not happen. Edson spotted a small herd with at least two bulls, one of them a shooter. But they were way off on the public land, and it felt like a tease. Back at camp during lunch, the mood was glum, too, as the other hunters had seen only small bulls and cows. The guides explained that this was a waiting game; an area with few elk one day can have multiple shooters the next. It made sense but didn’t exactly raise our hopes to learn that Edson and I would be ending our hunt in the same area where another group had seen only cows and a couple of spikes that morning.

Worse, with Edson still refusing to be the primary shooter and my odds growing slim, the chances of him shooting his first elk seemed gone. Then Tom Rice, a booking agent for Ivory Tip, showed up. He knew the properties well and wanted to go out in the afternoon—not to hunt, but just to sit with us. Suddenly our prospects seemed to brighten a little: The area we planned to hunt that evening had two large meadows not far apart, which meant Moline could take me to hunt one, and Rice could take Edson to hunt the other.

Arriving at the property, we parked a pair of Can-Ams among the aspens and were about to split up when Edson said, “Man, I’ve got a good feeling about tonight.”

“Dude,” I said. “You didn’t just say that.” I know it’s superstitious, but when fate seems to be smiling on you, you don’t call attention to it.

“At least you don’t have to wait for me to shoot first this time.”

Edson and Rice headed for the north meadow; Moline and I walked south along a drainage that split two open slopes. Moline walked straight to a particular subalpine fir tree, and as we crawled in among the lowest branches I discovered a comfortable two-man hide, well used and perfectly situated to shoot to the opposite slope.

I settled in, resting my rifle on shooting sticks. Maybe 75 yards ahead, a ribbon of mountain runoff, collecting in tiny pools, snaked through the bottom of the drainage, its banks carpeted with herbs that smelled like fresh mint. On the far side, a meadow speckled with aspens climbed to the top of a slope where, exactly 300 yards from our hide, the tall grass gave way to low, green pasture. Moline explained that the elk would likely emerge from the dark timber just beyond to feed. If we were lucky, they would then filter down to the creek for a drink—and an easy shot.

About an hour before dark, a cow and calf emerged. Then another cow, trailed by a pair of spike bulls. The females inched nervously from the timber onto the open slope to feed, and the spikes followed obliviously in between sparring sessions. They were fun to watch, but clearly these were the same elk the other hunters had seen in the morning. No reason to get excited—until my guide drew a quick breath.

“There’s a shooter to the left,” Moline said.

I shifted my binocular. I made out a whale tail and counted 5 points on the near side. The cows continued to munch on the low grass at 300 yards, giving no hint that they might filter down to the creek like we’d hoped.

“You’d better shoot him when he steps out,” Moline told me.

I already had the scope centered on a thick broom of fir needles screening the bull’s vitals. I was hoping he’d walk closer but knew the odds of that were slim, and the light was fading. Instead, he continued broadside onto the pasture, slightly beyond the cows.

“Here we go,” I said. I clicked the safety off, ran the crosshair up the bull’s front leg, held high on the shoulder, and squeezed the trigger. I only know what happened next because of what Moline shouted.

“You sat him right down!”

When we walked up, the bull was lying where he’d stood. Moline and I bumped fists and then stood back to admire him.

“Man, the elk were on their feet tonight,” Moline said. “I hope Jake and Tom at least saw some.”

There were only minutes of legal shooting time remaining, and with the last shades of light bleeding out of the sky, I assumed that Edson was not going to kill his first elk. I unsheathed my knife, nicked open the bull’s abdomen, and began running the blade toward the sternum.

Then a shot rang out from the north meadow. Just like that.

TRIP PLANNER: Go Where the Elk Are

Colorado has by far the largest elk population of any state, and Craig, where I hunted, has been officially dubbed the “Elk Hunting Capital of the World.” The area is not particularly known for big bulls, but there are trophies here. And if your goal is to tag any legal bull—plus see lots of other elk while you’re at it—there’s no better place, especially given that nonresident tags are over-the-counter. I hunted with Ivory Tip Outfitters, owned by Tony Bohrer. Visit ivorytip-outfitters.com for more information. —D.H.