When the going gets frosty, play dirty for winter fly-rod chrome. 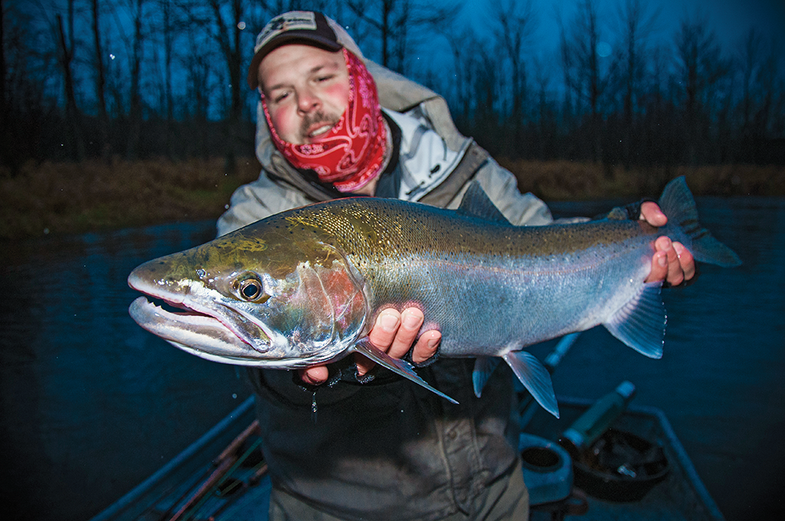 The guy who flyfishes for steelhead once a year with his buddies on one of the Great Lakes tributaries from Wisconsin to New York can’t wait for fall. The diehard steelheader on those same waters can’t wait for winter, because the other guy and his cronies will be long gone. The trade-off, of course, for having a normally crowded river to yourself is that you have to wade in near freezing water, row around ice floes, and coax sluggish fish that have been getting hammered for months. Such are the trials of the fly anglers who call themselves the “chosen frozen,” but if you want to join their ranks, these three dirty tricks I picked up while fishing with some of the best can turn you into a hot hand on a bitter-cold day.

Get the Skinny
In frigid water, you can pretty much forget about a pummeling hit on a swinging streamer. Low and slow wins now, and this means drifting egg flies, fleas, and nymphs (and lots of split shot) right in a steelhead’s face. In many regards, the old chuck-and-duck method already takes the sexy out of flyfishing, so rather than try to look like Lefty Kreh in the Arctic, do yourself a favor and respool with a flat running line, such as Cortland’s Precision Zip Polypro. Because running line is thin and slick, it holds less water than fly line. That means your guides will ice up less frequently, so you won’t have to clear them as often. Between that and the fact that you’ll never have to mend or strip, your hands will stay drier. Running line is also much more sensitive than fly line, so you can keep your gloves on and still feel the take. Yes, using running line may be off-putting to a fly purist, but if you’re going to be out in the cold just making 20-foot lobs—not 50-foot casts—all day anyway, I say give yourself every advantage.

Tie One On
If you’re catching fish, you’ll forget about how cold you are in a hurry. If you’re snagging, breaking off rigs every 10 drifts, and constantly retying with cold hands, you’ll start questioning your sanity in a hurry. That’s one reason why I stopped connecting my tippet and leader with Blood knots during winter years ago. Instead, I use a micro barrel swivel. Some may scoff at terminal tackle mixed into a fly rig, but I’ll be drifting again while they’re trying to make 12 turns in skinny mono with fingertips they can’t feel. I’ve also taken to pre-tying tippet on flies that I know will produce, and stringing them on an old-school snelled hook holder the night before. The less digging for spools in my pack I have to do, the more time I’m in the steel zone.

Double Down
Steelhead are very predictable in winter. They’ll stack in slow runs and deep pools where they can conserve energy. But just because you know the water in front of you is loaded doesn’t mean the fish will readily chew. A big mistake anglers make is pulling lines out when a buddy hooks up. As you take pictures or chase with the net, the pool is resting. In actuality, a hooked fish disrupts the others as it darts and thrashes, causing them to scatter out of the hole momentarily. Often they’ll pick up a passing fly as they slide back into their holding pattern. If you’re wading and someone hooks a fish above or below your position—and assuming you guys are friends—slip into that spot and get in a few drifts while they fight their fish. A double might make things chaotic, but anything that takes your mind off your numb toes is a good thing.

The trick to staying comfortable when fishing in the cold is to strike a balance with ­apparel that keeps you warm and dry without being heavy or restrictive. The new Windproof Buff ($43; ­buff​usa.com) has you covered in this department from the shoulders up. Unlike earlier cold-weather Buffs, this one wicks sweat and repels light precipitation thanks to the addition of Gore Windstopper material. A lot comfier than a ski mask, it keeps your neck toasty and comes off easily if you get overheated from running down a steelie. —J.C.