How to Restore a Vintage Double

A vintage shotgun caught the author’s eye at his local shop. Here’s how he revived it for today’s uplands 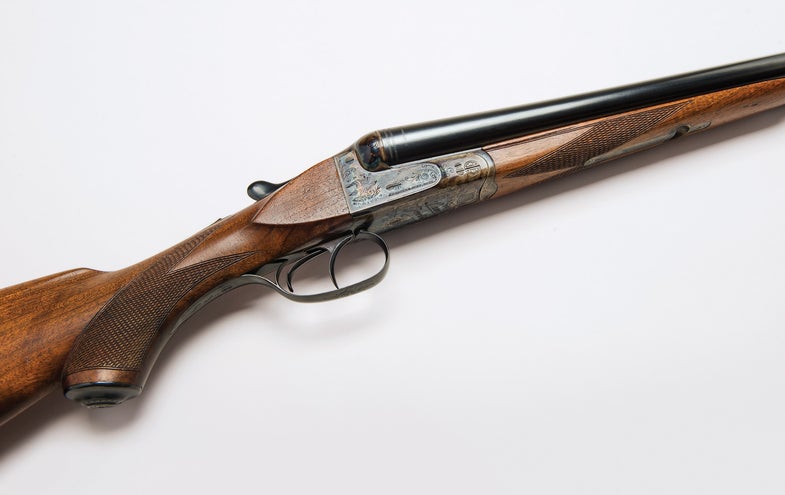 It was easy to pass by the new guns in the rack and let my eyes fall on the J.P. Sauer Habicht 12-gauge double at my local store. The gun had a story to tell. Made in Suhl, Germany, in November of 1940, it must have come to the U.S. in a G.I. duffel bag at the end of World War II. It was light and lively at 6 1⁄2 pounds with 28 1⁄2-inch barrels. They don’t make them like that anymore—at least none that I can afford—by the hands of craftsmen before CNC machines, laser engraving, and computer checkering. The price was right, too. I had to have it.

It was a dangerous moment. When an old gun grabs you, it is easy to just grab for your wallet. But that can be a costly mistake. Instead, you need to ask yourself what you want out of the gun. Then you need to carefully inspect the piece, add the cost of any repairs or upgrades, and finally decide if it’s all worthwhile. I wanted a beautiful and functional field gun. Here is the checklist I went through, the fixes I needed, the upgrades I wanted, and the final product.

German shotguns are made to last forever, but I checked the action anyway to be sure there wasn’t a problem. First I looked at the top lever from above. It pointed straight down to six o’clock. Any angle to the left is a sign of wear; anything to the right is a plus. Then I took the fore-end off, held the gun by the barrels and the grip, and tried to wiggle it. It didn’t budge. If it had, the action would probably have needed tightening.

My Fix: None needed.

I checked the wood for cracks, especially in the wrist and at the head of the stock. I also measured the stock dimensions to make sure it would fit fairly well, because what’s the point of hunting with a cool old gun if you can’t shoot it straight?

My Fix: None. I’d have liked to have it refinished to bring out the beauty of a very nice piece of walnut. But the wood was flush with the metal, and refinishing would have left it below. I decided to let the gun wear its scratches and scars.

Besides the blemishes in the stock, the original case color was worn to silver, especially on the bottom of the receiver (shown above). The barrels and trigger guard also had faded, from blue to dingy gray, and needed a pick-me-up. At least to my eye. Any cosmetic fixes are purely subjective, of course. There are many shooters of good taste who prefer that an old gun look old.

My Fix: I had the gun reblued (actual cost, $300) and the case color restored, which was the most expensive repair ($600), but the results were striking.

The old-gun buyer’s rule of thumb is “Buy the barrels.” So I made sure to ring the Sauer’s. To do this, you hang the barrels from one finger by the hook and tap them with a fingernail. If you get a clear, bell-like tone, the solder is good. If they go thunk, the solder joining the barrels is bad, which is expensive to fix. The ­Sauer’s barrels rang like a glockenspiel.

Then I looked down the barrels inside and out to check for pits, bulges, or dents. Some light pitting is O.K., but deep pits are a deal breaker, as are large bulges. It’s unsafe to fire a bulged barrel, and bulges are also costly to repair. You should not shoot dented barrels, either, but the price for fixing dents usually is not prohibitive.

The Sauer had 12/65 mm stamped on the barrel flats, indicating a 12-gauge shotgun with 2 9⁄16-inch chambers. (If the gun you are looking at isn’t stamped, you can measure chambers with a gauge.) The short chambers left me with three choices: Buy or reload short shells; shoot low-pressure 2 3⁄4-inch ammo; or have the chambers lengthened.

My Fix: Again, it’s a German gun and therefore built Tiger tank strong, so there was plenty of wall thickness to allow a gunsmith to lengthen the chambers to 2 3⁄4 inches ($95 per barrel).

I had the shop owner help me measure both, which revealed the gun to be underbored. Made with old-fashioned cardboard wadding in mind, it was only about .710 to .715 inch, well below the nominal .729 of a 12 gauge. The chokes were Very Full and Fuller than Very Full, not ideal for upland hunting.

My Fixes: To improve patterns with modern ammo, I had the bores enlarged to .734, which also lightened the barrels and improved handling ($150 per barrel). I could have had the chokes bored open ($95 per barrel), but instead I opted for choke tubes so I could use the gun for everything from early woodcock to late pheasants ($449 total).

When all was said and done…

My checklist complete, I ballparked the cost of the repairs and restorations, and added it to the price of the gun. I thought about what I would have when the project was done, about what else I might buy with that money, and I reached for my wallet. Later, I sent it to Briley Manufacturing in Houston for the makeover. Was it a sensible choice? No. Refurbishing an old gun is typically pricey and adds no value at all. But that’s the wrong question. The right question is: Was it worth it, to me? That answer is: Yes. I could have skipped the case coloring and chokes tubes and gotten off cheaper, but it was still worth it. I like the idea of following my German dog with a fine-looking German gun in the fields around home. And it makes me happy to bring a vintage shotgun back to useful life.