How Iron Sights Made Me the Marksman I Am Today 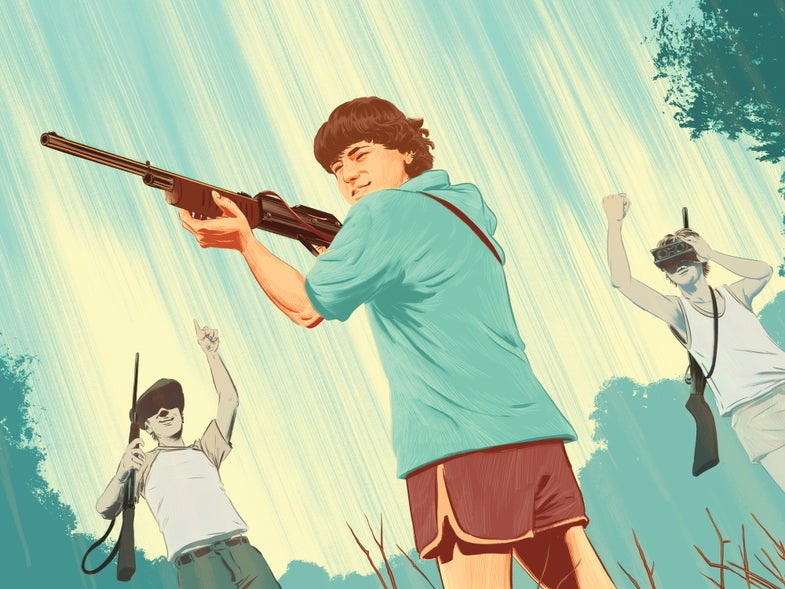 I’ve come to the grudging acceptance that I may never again be the rifleman I was at the hardened age of 14. It’s due not to failing eyesight or palpitations of the heart. It’s simply because I am no longer physically connected to a Crosman Model 760 Pumpmaster air rifle for upwards of 15 hours a day, which is how I spent much of my time as a young teenager. I no longer prowl backyards, city creeks, and sewer-line rights-of-way with 4 pounds of wood and steel fixed firmly to my right shoulder. Most pointedly, I no longer shoot iron sights.

I was 5 years old in 1966, the year the 760 Pumpmaster was introduced. By the time I scored a paper route and laid claim to my own spending money a few years later, the 760 had established itself as the sine qua non for budding adolescent hunters. It was the least expensive of the high-performance air rifles sold from the Sears Wish Book catalog, and it had a wood stock, a steel barrel, and a set of iron sights that, I firmly believe, did more to help fill deer freezers over the next half century than any other firearm development.

I was obsessed with that gun. During the school year, the screen door had hardly slammed shut before I traded my math book for my pellet rifle. My pals similarly fell under the 760’s spell, and we got a little crazy with those Crosmans. We figured out how to load multiple BBs in the chamber at once, which kicked off a rough time for the local tadpole populations. Straighten a coat hanger into a ramrod, shove lightning bugs down the barrel, and you had a heckuva glow-in-the-dark shotgun.

The Crosman user’s guide warned that you should never pump the gun more than 10 times or the air pressure might blow out the pneumatic action’s quad seal. To a 14-year-old, of course, that was just a double-dog dare. At 30 pumps the 760 would send a pellet completely through quarter-inch plywood. At 40 pumps you could punch a hole through the neighbor’s galvanized steel garbage cans. A blown-out quad seal could be somewhat revived with 3-in-One Oil to get a careful shooter back in the game through the last few weeks of summer. But the next time a garbage can beckoned would be one time too many.

But any chump could overpump a 760. There wasn’t much glory in that. What really counted was accuracy, and we honed our skills at putting a .177 pellet exactly where we wanted it.

Back in the day we shot everything. Squirrels, rabbits, leaves floating down the creek, blackbirds, dragonflies, bottle caps, beetles crawling on a log. I’m not proud of all that youthful carnage. But I do recognize that it made me the shooter I am today.

Shooting iron sights requires that every element of riflery be in perfect position, and in perfect relationship to each other. When too much light showed on one side of the post, or the top of the post drifted above the top of the notch, it didn’t just mean your aim was off. It meant that your stance wasn’t rock solid or your breathing wasn’t right or you didn’t have the rifle butt seated correctly and you were canting the gun to cover the mistake.

And that’s how I learned the basics of marksmanship. Shooting iron sights was all about harmony, but there was nothing metaphysical about it. Without really knowing what we were doing, we grooved our brains and hardwired our muscle memory. We shot so much that we knew intuitively when the light bars were balanced, and when the tops of the front post and rear notch were in alignment. We knew precisely how far we could shoot to the right before we had to shift our feet. We shot so much that today, 40 years later, I remember lying in my bed as a kid and dreaming about the sight picture down the barrel of a Pumpmaster.

It still makes a difference, even though I rarely shoot without optics. A couple of seasons ago, I was forced to mount my rifle on the off side, my left shoulder. I hadn’t pulled the trigger on a high-­powered rifle from my weak-side shoulder more than two or three times over the course of the last few years. The rifle was topped with a high-quality 3–9X variable scope, through which I could read a newspaper on the moon. But with the gun all cattywampus on my left shoulder, and the foregrip funky in my right hand, I knew I had to concentrate on perfect form. I couldn’t cant the rifle in the slightest. I had to monitor the sight picture for the bump of my heartbeat and any shift in the proportions of white space around the sight picture.

I pulled the trigger. I might have been looking through a scope, but I killed that deer with iron sights.

TIP OF THE MONTH: Sharpie Image

The edges of iron sights will wear over time, and the bright metal makes it difficult to maintain a crisp sight picture. You can blacken iron sights at home with either a bluing pen or a Sharpie. If you need to remedy this in the field, hold a sliver of burning pine or a small chunk of a flaming plastic cup to soot the sights for a sharp image. —T.E.N.

This article appears in the November 2016 issue with the headline “Forged Accuracy.”