Daze of the Rut

Another year brings another season in the deer woods 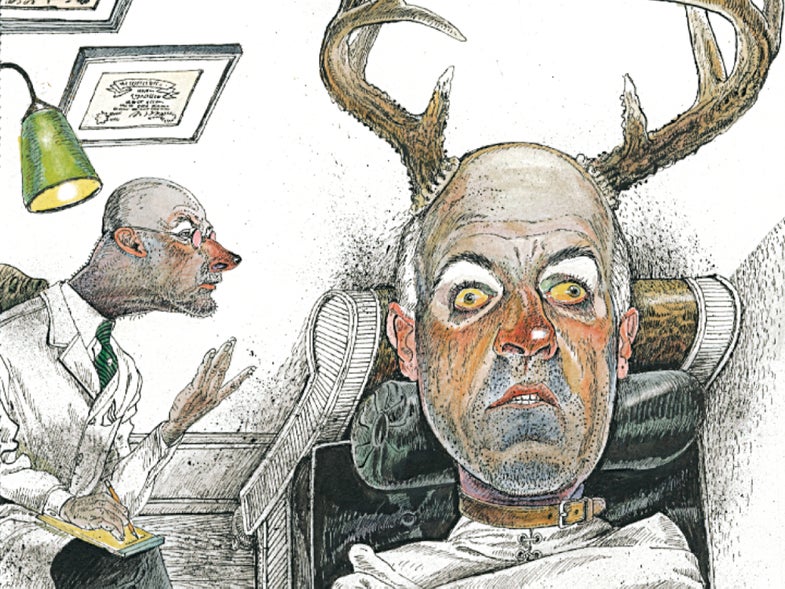 November is known for two important holidays, Thanksgiving and Black Friday, not necessarily in that order. Thanksgiving is a traditional family holiday and the one day of the year it’s acceptable to drink gravy directly from beer mugs. It’s also when family members who have driven hundreds of miles to visit relatives they see once a year discover that once a year is too often. Thanksgiving blends seamlessly into Black Friday, the busiest shopping day of the year and another holiday devoted to love of family. We express this love by camping overnight outside big-box stores in lawn chairs and taking nips of hot gravy from thermos bottles. An hour before the store opens the crowd is overwhelmed by the spirit of love. We press forward, crushing the store’s windows. At this time it is customary to trample to death anyone between you and a deeply discounted Xbox One.

But there’s another November, another ritual. Nature’s version predates not only the Puritans but even Homo erectus, an early hominid who lived almost 2 million years ago and, tragically, went extinct even before the first Xbox. The whitetail deer has been around for about 3.5 million years. Each November, the shortened span of daylight triggers a torrent of hormonal activity in deer, leading to a period of maximum sexual receptivity, the rut. It’s basically a monthlong weekend in Las Vegas for cervids. This urge to breed often overrides a buck’s first priority—which is to avoid danger. Bucks troll for receptive does nonstop, often venturing far from their core areas. You may see the biggest buck of your life at this time. That usually happens while you’re eating your sandwich and wondering why you’re not seeing any deer.

November always ambushes me with a heightened awareness of life. One moment, I’m me, a guy who dreads opening bills, hates beets, and now carries the equivalent of a purse for my keys, phone, earbuds, glasses, and the note reminding me why I left the house. In the November woods, I slither out of that identity like a snake sheds its skin. Time stops. Since a deer lives by its nose, the direction of the wind—­however slight—is everything. My eyes scan endlessly for movement, for the horizontal line of a back, the curve of a haunch. And the fullness of all this, the quickening in my heart, reminds me that everything has come full circle again.

Men and trees age in pretty much the same way. Over time, the distance between growth rings narrows, the years shorten. Two of my best friends have departed since I was last here. I feel this most keenly when my phone is halfway out of my pocket, before I remember that neither picks up anymore. I don’t know why they’re gone and I’m still here. I do know that this heightened sense carries the awareness of how brief, fluky, and random my life is. You can’t field dress a deer without realizing that your end might arrive just as suddenly. Or how similar your own lungs and heart are to a deer’s. Or how the earth will be just as happy to receive them.

There will be time for that. For now, I revel in existence, the stunning now-ness of things. I remember how, almost two years to the day and beneath this same stand, I had a lone doe come in, tracing strangely aimless loops at 3:30. Thirty seconds later, the biggest-racked buck I’d ever seen came into view. He was dogging her as if the two of them were the only beings in the world. I know now that his antlers weren’t thigh-high and wide as a doorway, but they looked that way then. I do remember that he moved like a quarter horse. I saw his shoulder muscles slide under his hide as he strode. He busted me in short order but didn’t bolt. He just looked straight at me for a long moment. I could read his mind. I was a potential threat, something to be aware of, but more on the order of a rival buck than a hunter with lethal broadheads seeking his life. While my legs shuddered under the hurricane of neurotransmitters loosed in my body, he kept at a distance of 30 to 40 yards, usually screened by undergrowth, and focused on the doe. He never altered his gait, always moving to cut her tangent at each new loop. With an arrow nocked, all I could do was watch, transfixed, at something I knew I might never see again. It was torture to be so close and not get a shot. It was rapture to even see this buck in daylight. After an eternity—somewhere between 15 seconds and two minutes—they disappeared.

When you come right down to it, we live on a pretty amazing little planet. I doubt there’s another like it. One thing that I know, lose sight of, and have to relearn continually is that being alive on it is a miracle, a gift. All of it. The good and the bad. Every second of it. Every atom of it. Including me.

The question is how to live your daily life so that you forget that less often than you would otherwise. This has always been part of the human dilemma. Shakespeare pondered it. “What should such fellows as I do crawling between earth and heaven?” confused Prince Hamlet asks. Most of the time, I’d be the last to know. But in November, you could do worse than this option: Enjoy that mug of gravy. Have two if you want. Beg off on the Black Friday lovefest. Get your butt up in a tree and hunt. Anything can happen. It’s November.