Back when this story first ran, a new style of angling called "cast and climb" had emerged. You may die in the process, but the fishing is great 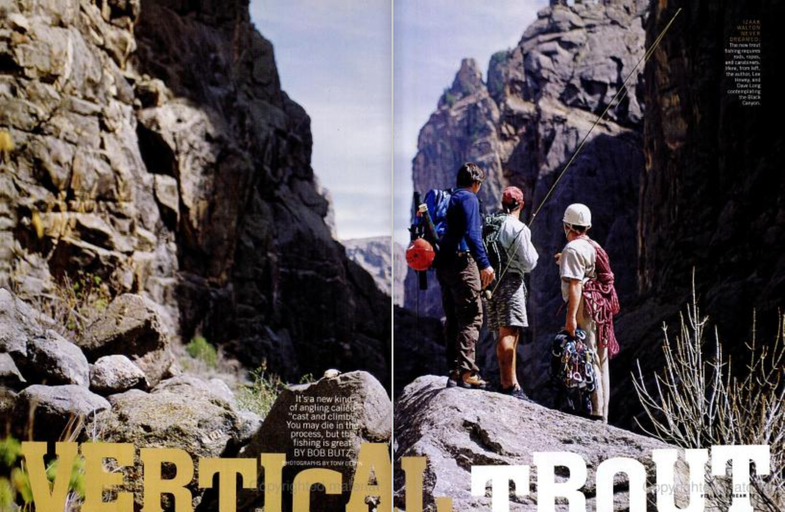 Two thousand feet down in Colorado’s Black Canyon, the Gunnison River is as close to “unrunnable” as a river can get. This is Class V and VI water—a 20-mile stretch of angry, killer, boulder-strewn white water—a short drive northwest of Montrose. But from the top of the North Rim, peering down between those sheer granite walls pressing in as smooth as tombstones, the river far below looks like a tiny emerald hair. Word is that the trout swimming there, rainbows and browns, are bigger than the blade of a canoe paddle. The trouble is how to reach them.

Given the altitude and the sheerness of the walls, I wondered if a base jump might not be a more practical means of descent. Our plan included packs, sleeping bags, and tents. Harnesses. Helmets. Ropes. And fly rods.

It’s called “cast and climb,” and it’s a technique finding favor in such places as Bar Harbor, Maine, and the other Black Canyon in Yellowstone Park. The idea is insane, but simple: Big fish survive best where people do not, and so you look for a piece of water that is so inaccessible that it might as well be on the other side of the world.

There were four of us making the climb down into “The Black,” as it’s known in Colorado—a Michigander (myself) and three Montanans: Dave Long, a former molecular biologist turned photographer; Lee Hewey, a contractor; and Tony Demin, another photographer. It was the mother of all descents—but what lay at the bottom was worth it.

It was Tony who found the trail, if you can call it that: more like a sheep path pitching down, a few degrees shy of vertical, through a slipping and sliding chute of loose talus toward the canyon floor. Park rangers (the Black Canyon is the heart of Colorado’s Gunnison National Park) describe this descent as a “controlled fall.” Local rock climbers refer to it as the S.O.B. Draw. Whatever you call it, a little over half an hour into the climb, I was sweating hard and breathing through my mouth, my knees ready to buckle.

We tacked back and forth over ankle-twisting talus, scrambling over boulders and rubble, losing the trail and then finding it again, while the heat shimmered off the rust-colored walls of the canyon. We kept our eyes on the rocks underfoot, matching step for step with the man in front as an eagle soared overhead and swallows darted from their nests in the rock.

There are two constant dangers here: One is falling, and the other is poison ivy, which Steve Lyons described in his Black Canyon guidebook as “gargantuan, lush and potent, shiny-green-leaved bushes that crowd and hover over the trail.”

The river came into view, roaring, and spitting white between cabin-size boulders. It took us nearly three hours to make it to the bottom, where the canyon floor, strewn with millions of years’ worth of falling rock, offered not one square foot of level ground. Everywhere were giant ramps of talus, piles of stone, and immense, precariously balanced boulders. Near the base of the trail we descended, the Gunnison is almost completely blocked by a colossal wall of rubble, silo-shaped granite blocks with—seemingly—no handholds and no way to climb over them. But on the other side was a pool that, from 2,000 feet up, had suggested prime fishing—and in fact may never have been fished before. Our plan was to make camp and try to climb the wall the following morning. So we followed the current downstream along an ankle-turning footpath, and after a mile found one of the few places you can pitch a tent in the canyon. It was a grassy spot about the size of a putting green, at the base of a talus slope. We pitched the tents and ate lunch. Tony headed off with his camera and tripod, Dave went in search of a way over the wall for the next day with Hewey along to belay him, and I sat at the river’s edge, kneading my aching thighs.

But I had come to fish. So I tried the big pool that our campsite overlooked, a place I came to call Disappointment Hole. Boiling rapids, the water fizzing like seltzer, marked its head and foot. Here the Gunnison runs a frigid 45 degrees and the current is so swift you don’t want to wade in above your knees. Heeding the advice of park rangers, I didn’t want to wade it at all. I hopped from rock to rock along the river’s edge, frustrated by trout just out of reach and cracking at every midge and mayfly in the pool except the imitations tied to my leader.

Black Caddis, Bluewing Olive, an Adams—they wanted none of it. I toiled away most of the afternoon without a bite. Finally, I tried casting nymphs—a Prince and a Pheasant Tail on a dropper—to a seam where the river split between two chalky stones, and was fast connected to a fish.

It was a good-size rainbow that swam a few wild circles in the hole, and I almost had it in hand when something exploded in the river like a depth charge. Then another—a rock the size of a football, followed by a handful of smaller stones. I looked up to the crack of sky above me and saw only the canyon walls glowing pink and rusty in the sun.

My rainbow had broken off, and finding it difficult to fish with one eye on the water and the other searching the sky for rocks that could break my skull, I worked my way back to camp, troutless.

The ascent over the rubble dam was more of a crawl than a climb. We couldn’t get all the way over it, so after scraping and cussing our way 20 feet up onto a narrow ledge, we literally crawled through it. We inched through crevasses and belly-crawled through fissures and wormholes between the stones. Down a ramp of granite, bare of holds, we worked to another ledge, reaching the bottom of the gorge at last—and another wall.

It was shady and cool and damp. Although we could hear the river ripping under us and the rumble of loose stones rolling with the current vibrating beneath our heels, we could see no water. Dave pointed to a dark crack in the wall.

“We’re going through there next.”

When I did see water again it was inside that mass of huge stones—a narrow chute of gushing white froth that we had to half straddle, half hop over. We crawled over damp driftwood, the roar of the river echoing off the walls, and then finally there was a light and a hole overhead through which we emerged one by one like marmots, happy in the sun.

The first thing I saw was trout in the green water, sucking midges from the top—big trout, a dozen or so, their shadowy forms finning in the current. The rainbows were hefty, slab-sided, mustard-colored fish with a wide raspberry stripe down their sides. The most striking thing about them was their eyes-bulbous, round goldfish eyes, formed by a life passed in this canyon where the direct sun only shines a couple of hours a day.

While the rainbows were easily as long as my hand and forearm, the browns were smaller but decidedly better fighters. We pulled them by the dozens from swirling holes and eddies no bigger than the hood of a pickup. Anywhere there was slack water the fish were stacked like cordwood, and we caught them as you would expect to in a place that few fishermen have even seen, let alone wet a line in.

I’ve always been of a mind that water is a little sweeter when you mix it with sweat. Although the trout were what brought us here, they would have to take a backseat to the challenge of getting in, the climb through the dam, the next day’s long, hard ascent out of the canyon-and, of course, the chance of getting killed in the process. All to find a quiet place on the water, which leads the fly fishing obsessive in me to wonder: Has it really come to this?