Carefully select your components, load your first batch of rounds, and head to the range 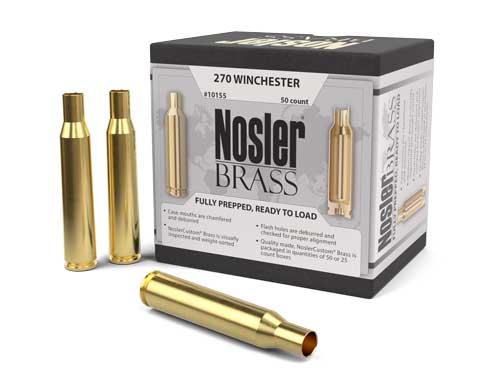 So, at the end of Part I, we’d begun the process of working up an elk load for our .270. Now we need to start buying components, beginning with brass. Don’t buy cheap brass. Whatever money you might save on cases you will more than lose in wasted components because cheap brass is sloppily made (which is why it’s cheap) and will not shoot accurately. If Lapua makes brass in your caliber, buy it. Since they don’t produce .270 shells, which I think is pretty un-American of them, buy Nosler brass. This is a very good rule to follow generally.

Also, brands of brass do not interchange. If you work up a load with one make, you can’t simply substitute another. Some brass is thicker than other brass, and the smaller powder space means higher pressures.

You also need primers. I keep several makes and models on hand because they all burn at different rates. The following are Large Rifle primers, which is what a .270 eats.

CCI 200: This is a well-bred, mild-mannered primer that works well with medium- to slightly slower-burning powders.

CCI 250: This is the magnum version. Of the magnum primers, it is one of the milder ones and gives good results in standard cartridges like the .270.

Winchester WLR: It seems to be the hottest standard rifle primer around.

Federal 210M: The “M” stands for “match.” For use where accuracy is paramount. They are made with extra care.

Federal 215: The hottest of the magnum primers, this will ignite even the most monstrous charges of ultra-slow powder and also does very well in standard cartridges like the .30/06.

There are other primers, but these are the ones I’ve been using for decades and decades. At one time or another, all of them are going to work for you.

Powder. I have a chart over my loading bench that lists over 80 powders that can be used in rifles, and I suspect it’s outdated. If I were looking to load a .270, I’d look at three powders: Hodgdon 4831 (not IMR 4831), RelodeR 22, and RelodeR 25. The first two are slow; the third is very slow. I find that, used in hefty doses, they give you excellent velocity and no pressure problems.

Go to whatever loading manual you have, pick a charge that’s a couple of grains below max, and load six rounds for two groups of three shots. Shoot these, and look for what kind of accuracy you’re getting, and for signs of excess pressure. Don’t load up a whole bunch right off the bat. If they don’t group, you’re going to have to break them down.

If you get real lucky and get good groups on the first crack, then load up another nine and shoot three more groups. Don’t trust any handload until you’ve fired five consecutive good groups with it.

The same principle applies to other cartridges. For loading the .308, you won’t need magnum primers, and you’ll want faster powders, say, RelodeR 15, IMR 4320, and IMR 4895. No more than three. If one of those doesn’t work, something is dreadfully wrong.