And the Oscar Goes to…Bambi 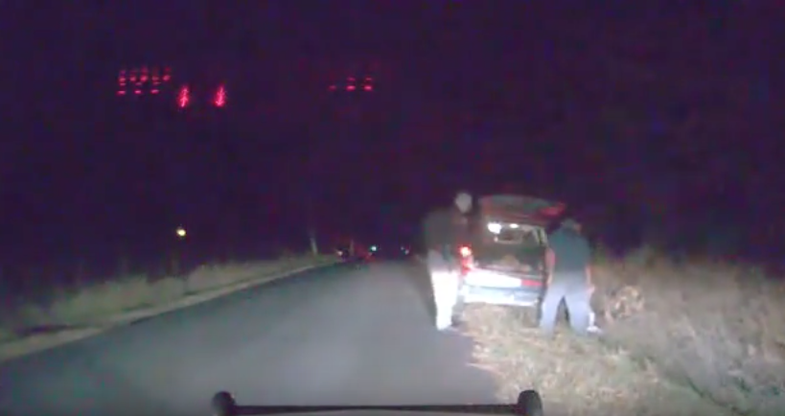 Those police cruiser cams sometimes capture stories that your buddies otherwise wouldn’t believe. Take this one from Nov. 22, in which an Adams County, Wis., sheriff’s deputy responds to a call from a man with a dead deer in his trunk. (He might have been calling to get a dead deer certificate, which you actually need in many states to legally pick up roadkill. These can only be issued by the police or DNR.)

The officer says, “Well, we might as well tear her on out of here,”—meaning the trunk—“and put her down.” The driver opens the trunk. The guy touches the deer’s leg. It moves. Then the deer goes limp again. “She’s mangled,” he notes. At this point, the cop asks if the guy saw the video from a couple of years ago about one in the trunk of a car, evidently referring to one about a dead deer that turned out not to be dead. But he doesn’t finish the story because the other fellow has already pulled the inert deer out and let it drop to the grass on the shoulder of the road.

“Just leave her,” the cop says. “I’ll put her down.” He goes to unholster his sidearm. “Just step away from her,” he repeats, “and I’ll…” At this point, the deer leaps to its feet, runs about 15 feet and stands there, looking back at the two. “Are you okay?” the cop asks the deer. What’s kind of endearing is that he speaks in the same tone he’d use to ask somebody who’d just taken a tumble on an icy street. “Or…?” He takes a step toward the deer. At which point it runs away. “There she goes,” the cop says. The men laugh and part.

I have no idea what happened to the deer. Wounded things usually don’t last long in the wild. But deer can be tougher than we think, surviving with entire arrows sticking out of them. I’m hoping this one made it. He’s definitely legit, a little over the top, but that can make for good copy.