Tips from the Guides: The Big-Woods Squeeze

The Guide: Randy Flannery Wilderness Escape Outfitters, Danforth, Maine His Secret: “You’ve got to be hardheaded. When you get on... 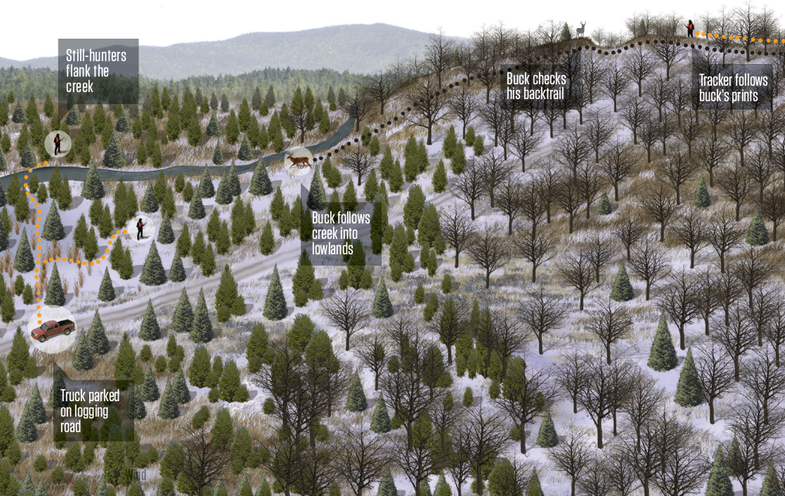 His Secret:
“You’ve got to be hardheaded. When you get on a track in the morning, you need to tell yourself: I’m not leaving these prints until I kill the buck or it gets dark.”

This time of year, in what Randy Flannery calls the recovery period, big-woods bucks feed at night on the hardwood ridges and hunker down all day in the evergreen lowlands. To get from high to low, they typically follow a creek or beaver flow that leads to their swampy lair.

“When we get fresh snow, I round up my son Scott and his buddy Randy, and we try to find a hungry buck lingering on those ridges early in the morning,” says Flannery. Before dawn, they study topo maps to find ridges that descend into creeks leading to swamps. “It’s a common scenario here.” Then they drive logging roads looking for a good track heading uphill along a ridge. Flannery follows the prints, while the boys drive to the far end of the ridge and several miles along the nearest creek. The two will get on either side of the flow and still-hunt it back toward Flannery.

“I’m out to track and shoot that buck,” says Flannery. “But I also know that a big whitetail that’s being followed tends to run the length of the ridge, which will eventually lead him to the creek where the boys are.” Bucks follow the ridgeline because it lets them easily check their backtrail wherever there’s a dip in the spine. “They go down one side, up the other, and then look back to see if you do the same. Whenever you spot a dip ahead, stop, scan the other side, and be ready to shoot.”

If at any point the buck starts to drop down the side of the ridge, Flannery circles downhill and stays below the track until he sees it heading back uphill. As long as he keeps the buck following the spine toward the creek, there’s a good chance either he will kill it in one of the dips or one of the boys will get a chance. “Randy has taken a couple of good bucks this way, and Scott killed a nice 9-pointer three years ago.”