If Deer Hunters Ruled the World

Tuxedos with hand-warmer pockets, chewing tobacco that smells like a cycling doe, and numerous other signs that the guys in orange and camo are calling the shots. 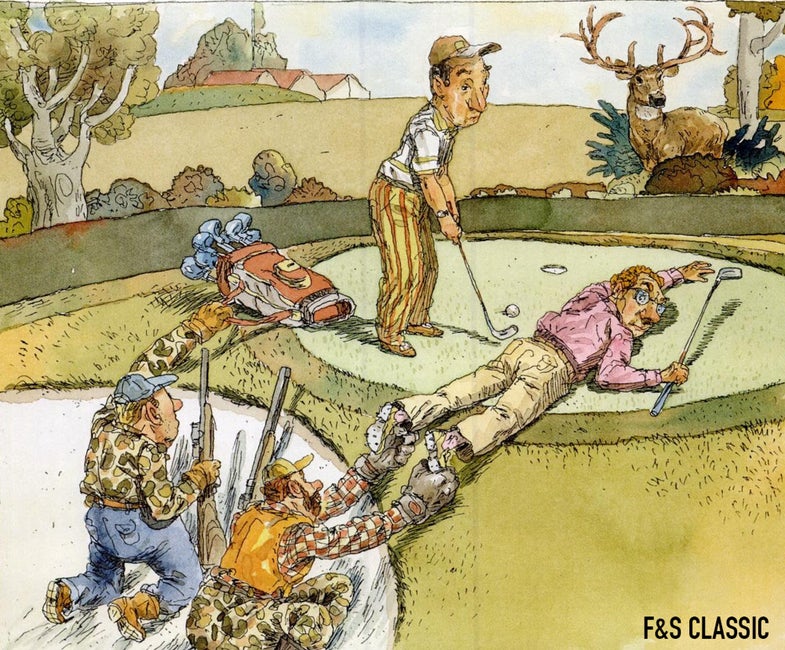 Golfers would have to leave the links at once if you spotted a good deer on the course and wanted to stalk it.. John Cuneo
SHARE

1. The entire month of November would be a paid religious holiday.

2. You could go to a fast-food restaurant and order a McBackstrap sandwich with extra garlic and fries.

3. Men with big butts would be renowned for their “outside spread.”

4. Taxidermy would be a required course in elementary schools.

5. Golfers would have to leave the links at once if you spotted a good deer on the course and wanted to stalk it.

6. Failure to do so would result in the golf course’s being converted to an 18-hole food plot. The sand traps would be turned into mineral licks.

7. Guys who hunted your stand without permission would do a mandatory seven to 10 years.

8. You would be fined by the police if you were stopped and found not to be in possession of a weapon.

9. After one week, reports of violent crime would cease altogether.

10. All jackets would come with a built-in safety harness and hand-warmer pockets, even tuxedos.

11. There wouldn’t be any tuxedos.

12. The government would announce a “race for the cure” and throw billions of dollars into research to eradicate buck fever.

13. Your wife would complain that you’re spending too much time around the house and tell you to “drop that paintbrush and get your sorry ass out to the stand.”

14. At parties, a tending grunt would be considered a sophisticated way of showing interest in a member of the opposite sex.

15. Gas stations would have attendants that approached from the downwind side to fill your gas tank, then spray and clean your windshield with Scent Killer.

17. All vehicles would come with bloodproof seat covers standard.

18. Game wardens could not come within 300 yards of you unless you signaled that it was okay.

19. A warden’s first words would be “If this isn’t a convenient time, sir, I’d be happy to come back later.”

20. Convenience stores would stock shells, broadheads, and blackpowder accessories in little bowls by the doughnut case.

21. If you showed up at a fancy restaurant in full camo and reeking of doe urine, you’d immediately be shown to the best table in the house.

22. Bars would have “sparring areas” where you could put on an antler helmet and go head-to-head with other hunters to let off steam.

23. A chewing tobacco would be developed that, when mixed with human saliva, turns into a powerful deer attractant.

24.The dollar bill would feature a picture of the Hanson buck.

25. Landowners would come around to your house and beg you to hunt their property.

26. If you gave your wife or girlfriend a scoped .30/06 on her birthday, your anniversary, or Valentine’s Day, she’d say, “Honey, you’re the best!”

27. The State of the Union address would be given by a deer biologist telling you the best places to hunt.

28. “I just felt like they were gonna be moving this morning” would be an acceptable excuse for why you were late to work.

29. Each day’s weather report would start with wind direction and velocity, barometric pressure, and times for the beginning and end of legal light.

30. Reality TV shows would feature six people turned loose during the rut in an extremely rural area with a sharpened stone and a grunt call. First one to bring in a 150-class deer wins $1 million.