Sometimes the pleasure of fishing lies in the throw, not the catch. 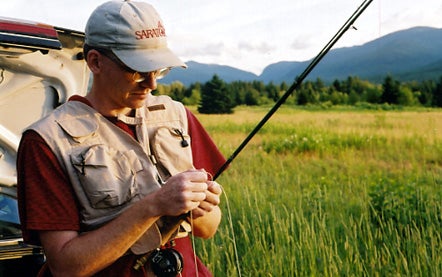 I got cornered by one just the other day.

“No, no,” he said, chuckling and shaking his head. “You don’t want that. That’s a searching fly.” Then he looked around and leaned in to me, as if to reveal some profound secret. “Look, when you get really good at this game, you’ll learn to search with your eyes, not with your fly.”

“Oh yes,” he answered. “The biggest mistake people make is they cast too much. They’re forever beating up the water with their fly lines, whether they see a fish rising or not. It’s like they’re casting just for kicks.”

“I sometimes cast just for kicks.”

He smiled, offering me a conciliatory pat on the shoulder. “Well, you shouldn’t.”

In fact, just before sitting down to write this, I spent about an hour casting in the backyard. As far as I could tell, there were no fish rising back there, but I had a pretty good time just the same.

Come to think of it, I don’t think I saw a single fish rise on my last fishing trip, either. I did, however, make a cast that left me feeling pretty good about myself. In fact, as I picture it now — my fly line shooting all the way across that wide pool — I have to admit that I’m still enjoying no small amount of satisfaction.

I also think of the many times my brothers and I have spinfished the small trout creeks at home, where the most promising currents invariably run hidden beneath overhanging brush or curl around labyrinths of fallen logs and sweepers. There are no easy casts there. What’s more, many of your best casts don’t produce fish. I’m sure that guy in the fly shop would call these casts “unrewarded.” But I wouldn’t.

Not long ago, I went surf fishing for stripers with my friend George. Living inland, I’m not much of a saltwater fisherman and at first didn’t see the appeal of catching fish that averaged less than 20 inches on a rod that resembles a telephone pole. But once we got going, I realized that the fun, at least in this case, wasn’t so much in the catching as in the casting. There were plenty of times when we saw no fish breaking, yet went right on firing heavy plugs way off into the long, blue distance — mostly just to see which of us could come closest to hitting the horizon.

In the end, half of fishing is casting. And that’s just fine as far as I’m concerned. To me, a perfect cast in tight quarters feels a lot like pocketing a kiss shot in pool. And a long-range cast that sails into the distance feels like a home run. Now, I don’t claim to know it all, and I wouldn’t presume to tell you what to do. But I think there’s something to be said for casting just for kicks.