Do contests belong in the woods? 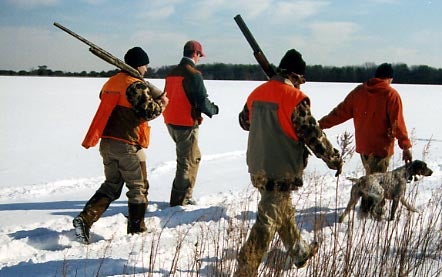 I’m oblivious to many things. Just a couple of weekends ago, for example, while hunting grouse near my folks’ with my friend Jo, I discovered yet another thing I had known more or less nothing about.

Up there, once the deer season is over, you can typically hop from farm to farm without running into more than one or two other hunters at most. But that was far from the case this time. Driving the back roads on the way to our spot, we passed one vehicle after another, parked along the shoulder.

That people were hunting coyotes on a weekend in late February wasn’t out of the ordinary. Jo and his parents used to hunt them every winter, and as a kid, I’d joined them a few times. But there seemed to be an unusually high number of people out hunting them that day.

With nobody parked by our spot, we hit the woods and started pushing a big pasture overgrown with birch and bramble. We’d put up a few birds and missed a few shots when, in the distance, we heard the high-pitched howls and yips of a pair of beagles running snowshoe hares.

“I guess they weren’t all coyote hunters,” I said to Jo. Then, in the opposite direction, a little farther off, there came the long, low bawl of a redbone, or maybe a black-and-tan, that had just cut fresh coyote tracks.

With the beagles yipping in the distance on one side and the big hound bawling on the other, we put up a few more birds and missed a few more shots until we reached the end of the pasture. As we walked down the dirt road back toward our truck, a couple of coyote hunters stepped out of the woods opposite the side that we’d been hunting. Jo knew them and offered a ride back to their vehicle.

“Nope,” one of them answered, sounding a little frustrated. “I should have signed up for snowshoes today. It’s a smaller prize, but I think I’d have had a better shot at winning, you know?”

No, I didn’t know. Turns out, he explained, the number of vehicles we’d seen and the dogs we’d heard were part of a pair of contests being held that weekend, one for snowshoes and another for coyotes. Apparently, these events take place on most winter weekends up there and draw quite a number of hunters, each hoping to turn in the winning weight and claim a new gun or cash prize.

This was not terribly surprising, as I’m aware that various contest hunts are held around the country. There are big-buck contests, limited-shot waterfowl and upland bird hunts (to see who can take a limit with the minimum number of shots), and even body-count varmint hunts. But I had no idea they’d become so common and popular in my hometown. And I’ll admit that, at least at first, it didn’t sit that well with me.

But before I tell you what I think about contest hunts, I’d like to hear what you think: Should hunting be a competitive sport? Are contests unsportsmanlike or simply harmless fun? Does it depend on the contest rules, and if so, which sort of contests are okay and which go over the line?

Please send your comments to davesplace1@aol.com.