Sometimes, ignoring the captain’s call to “reel ′em in” for a few extra minutes during a guided fishing trip can... 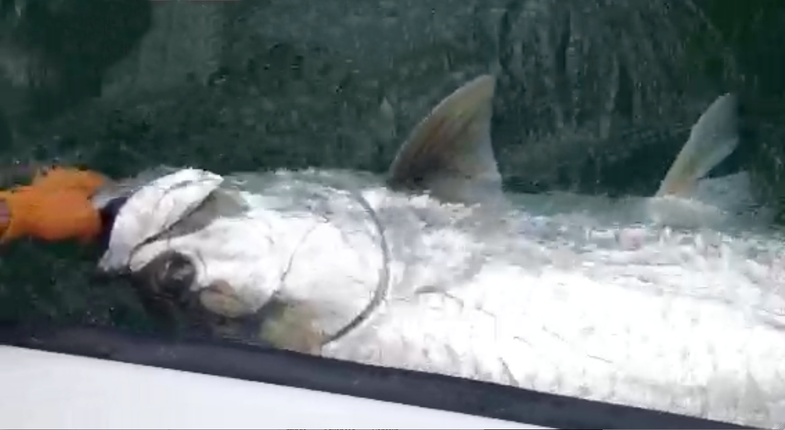 Sometimes, ignoring the captain’s call to “reel ′em in” for a few extra minutes during a guided fishing trip can make a big difference. Jan Toule of Beloit, Wisconsin hooked, landed, and released a tarpon of world-record proportions on Monday, June 24, off the Florida coast–just 300 yards offshore of Anna Marie Island near Brandenton.

The stellar fish was 96 inches long with a girth of 53 inches when measured alongside the boat. These dimensions would have the fish weighing an estimated 337 pounds, approximately 48 pounds heavier than the world’s largest on record. It was never weighed on an official scale and was only roughly measured with a fishing rod, so the catch will never end up in the IGFA record book.

Toule and his son, Jeremy, were fishing with Captain Justin Moore guest of ABC Supply Company’s Drew Denick and Roy Joyce, who were also on board. A storm started building in the distance, so Moore requested reeling in and heading back to the dock. But Toule didn’t hear the captain’s first appeal and his line stayed out just a few minutes more. When he did finally start to reel in, he found the monster fish had eaten his 6-inch threadfin herring. It was 1 p.m.

“We had already had an amazing day on the water,” said Denick. “The very first fish of the day was a fish about 160 pounds; a true trophy in anybody’s book. After that, it was a 130-pounder and then three in the 150-pound class. All our phones and camera’s had dead batteries from taking videos of the previous catches. All that was left was an iPad with not much charge left to it,” Denick added.

The video above is the end result of the iPad footage, documenting just how humongous the fish was.

Moore had his clients casting into large schools of tarpon that were feasting on schools of baitfish in 25 to 35 feet of water when the giant hit. It took the four anglers and an hour and a half to reel the beast. They were using a 9-foot Crowder custom rod and 7500 Fin-Nor Off Shore Series reel. The spinning reel was spooled with 65-pound PowerPro superline and had an 80-pound-test Triple Fish fluorocarbon leader connecting a size-7/0 Owner Mutu Light off-set circle hook tied to its tip.

“I grew up in the tarpon-fishing trade and have seen a lot of giant fish in my life. This one, however, topped them all,” said Moore, who’s been guiding 14-plus years as well working with his father, Captain Scott Moore, who started the business 31 years ago. “This fish was by far the biggest one I have seen… ever. So much so it had a different look to it than even the 200-pounders we often see.”

Currently, according to International Game Fish Association records, the world-record tarpon is a 289-pound 9-ouncer landed by Max Domecq on March 20, 2003 in Rubane, Guinea-Bissau. Florida’s state-record fish weighs in at 243 pound, and was caught by Gus Bell off Key West in 1975, according to the Florida Fish and Wildlife Conservation Commission website.

Jack Vitek, world-record coordinator for the IGFA, says there are several reasons the tarpon can’t be considered for a record.

“Number one, the rod was passed angler to anger during the fight. After that, it didn’t get officially weighed. We require any world-record fish to be weighed on an IGFA-certified scale; you’d have to be prepped well ahead of time for a fish like this, with a tri-pod and IGFA-certified scale at the ready,” Vitek said. “Catch and release is not acceptable for official world-record status. There is a length record category for many species, however. But it must be calculated with a measuring device. Tarpon, though, are not acceptable for length-only records at the time.”