Why You Should Be Targeting Snapper Bluefish Right Now

Schools of little killers are invading your bay. Are you ready to fight back? 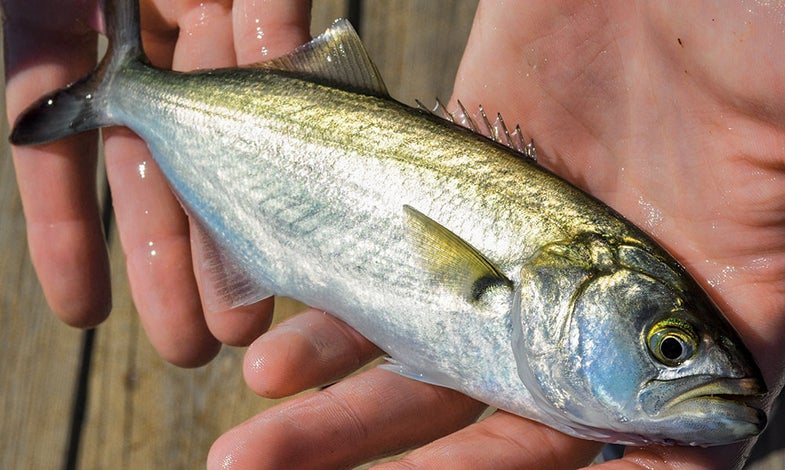 What juvenile blues lack in size, they make up for in aggression, and flavor.. Kevin Blinkoff
SHARE

Bluefish are voracious. They’ve been known to vomit just to make room in their stomachs so they can continue to feed. That unquenchable hunger—coupled with a fighting ability that puts more coveted gamefish to shame—is what makes them such amazing targets. This ravenous nature is fully developed at birth. A 10-inch juvenile “snapper” has the same wolflike attitude as an 18-pound “slammer.” Every summer, tiny snappers make their way into bays from Florida to Maine, and by August they’ve grown large enough to become worthy light-tackle opponents. Unlike their bigger relatives in the ocean, snappers are easy to find and easy to catch. Best of all, since you can make your approach as simple or as technical as you’d like, they are perfect sport for anglers of any skill level.

There is a bulkhead at the end of 13th Street in Surf City, N.J., that butts up against Barnegat Bay. When I was growing up, my family would rent a house nearby in summer, and I’d spend hours sitting on the dirty wooden ledge with a trout rod, a reel filled with 6-pound-test, and a bag of frozen spearing. My rig was basic: a foam bobber and a cheap long-shank hook to prevent bite-offs. Sometimes it would take a little while for the first snapper to find the bait, but once it did, that bobber would get sucked under on almost every cast.

That bulkhead was not special, nor any sort of hotspot. The truth is, you can pick any dock, pier, sod bank, bay beach, or bridge, and you’re likely to get covered up in snapper blues. The most important factor is depth. While the fish will feed on skinny flats, I’ve always found that areas with 4 to 10 feet of water produce best. In many cases, finding the right depth requires waiting for a high tide, but if your spot has 3 or 4 feet of water around it at dead low, you’ll catch fish.

Like their adult relatives, snappers respond well to chumming. Broadcast a handful of bait pieces before sending out your hooked bait. Small live baits will quickly get attacked, although I’ve never found them advantageous enough to be worth the trouble. Once snappers are worked into a feeding frenzy, a frozen baitfish or a small squid strip is all you need.

If you’d rather take a more grown-up approach to snappers, lure selection could not be simpler. If it’s small and it flashes, it gets hammered. Because snapper teeth are just as razor sharp as mature bluefish chompers, metal lures are a smart choice; they can take the toothy abuse. The staples in Jersey when I was a kid were Acme’s 1⁄8-ounce Kastmaster and Hippy in silver. Most of the time, ripping the lure as fast as possible drew the most strikes, and making it break the surface and jump occasionally seemed to get the snappers really fired up.

Snappers also make exceptional fly-rod targets, especially on a 4- or 5-weight outfit that will let you enjoy their scrappy fights. Just make sure you’ve got plenty of flies because they won’t last long. If I’m tying patterns for snappers, I keep it cheap and easy. I use inexpensive long-shank hooks, tie on one sparse pinch of white bucktail and a few strands of flash material, and secure it all with a drop of superglue.

Perhaps one of the most overlooked perks of snapper blues is their quality on the table. Adult blues are an acquired taste. Snappers, however, lack the oily flesh and dark bloodlines of the big fish. Their meat is white, mild, and sweet. Floured, flash-fried snapper fillets with a sprinkling of Old Bay is a flavor that will forever take me back to those Surf City summers, although these days it’s slightly more enjoyable because I can pair it with an ice-cold brew.

Looking for a big dog-day fly-rod largemouth bass? Skip the foam and tie on a hair bug. Yes, hard-bodied poppers may make more of a commotion, but they also catch a lot of small bass. Hair bugs hit the water more gently and bulge more water on the strip, creating a broad wake and more muted sound that larger fish often respond to better. A frog swimming across the surface isn’t going to make lots of noise, and the hawgs know it.—J.C.