Sportman’s Storm: Congress to Come Down on Anglers and Hunters

Fish-and-game protections are in the path of a killer Congress. 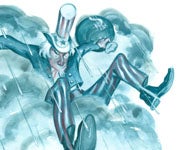 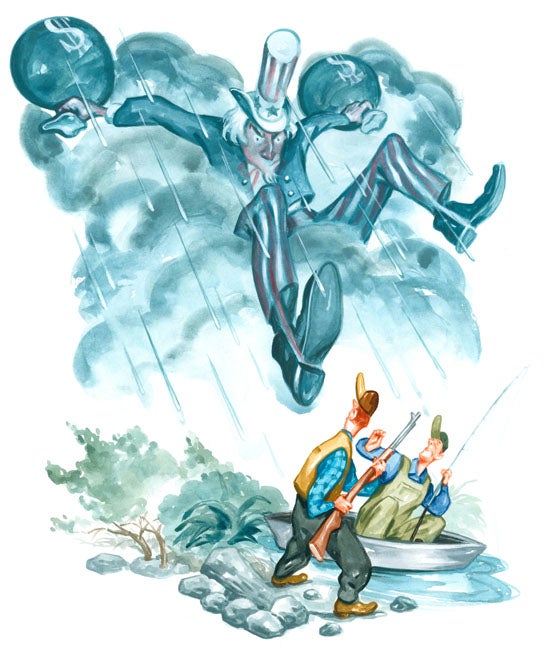 It’s now or never for public hunting and fishing.

For 2 million miles of stream habitat that support the wild trout and big-game herds in the West. For 20 million acres of small wetlands that produce most of the ducks U.S. hunters shoot every fall. For Appalachian mountaintops that protect trout streams; for coastal estuaries that produce salmon, redfish, snook, and tarpon along the coasts.

If individual sportsmen and sportswomen don’t act now–if they don’t contact their congressional delegations in the next few months and tell them to call off their attacks on the regulations and conservation programs that have sustained quality public hunting and fishing for a century–their grandchildren may never share the experiences they hold so dear.

That’s the reality facing America’s hunters and anglers in 2012.

“The average hunter and angler out there doesn’t understand what’s going on, that what we’re seeing is the biggest attack on fish and wildlife habitat in 100 years,” says Jim Martin, conservation director of Pure Fishing’s Berkley Conservation Institute and former chief of fisheries at the Oregon Department of Fish and Wildlife.

The sportsmen’s conservation movement finds itself lashed by political and economic forces that threaten to undo generations of work and billions of dollars dedicated to building and protecting the habitat base that supports the world’s best public outdoors experiences.

Last year, many in Congress joined an anti-conservation movement that could cripple or eliminate vital fish and wildlife habitat initiatives that had broad support for years. The attacks began shortly after the new Congress was sworn in, with an appropriations bill to keep government functioning–H.R. 1–that was loaded with dozens of policy riders aimed at everything from wetland protections to global warming studies. Most failed, but the assaults never stopped. As the National Wildlife Federation pointed out in December, one in five of all House roll-call votes taken in 2011–fully 22 percent–involved measures to weaken environmental protections. The Conservation Reserve Program, North American Wetlands Conservation Fund, Wetlands Reserve Program, Grasslands Reserve Program, Wildlife Habitat Incentive Program, and Environmental Quality Incentives Program were targeted for decreased funds.

And that was just for starters.

They also went after keystone federal regulations protecting critical habitat, including a definition of wetlands essential to waterfowl, trout, and big-game habitat; mining regulations that protect Appalachian ecosystems; clean-air rules that protect forests and people, plus other rules needed to address global warming and sea-level rise that threaten to drown our coasts; clean-water rules that prevent the spread of dead zones in estuaries producing saltwater fish; and rules that protect roadless areas sustaining big-game herds and backcountry hunting.

Most of those initiatives were blocked in the Senate, but by the end of 2011 the assaults were still going on. The persistence of the attack has shaken veterans of the sportsmen’s conservation movement, not only because it shows just how well-funded their opponents are but also because it hints that the attention hunters and anglers once commanded in Washington may be slipping.

“I’ve never seen anything like this,” says Dale Hall, CEO of Ducks Unlimited, who saw a lot in his 31 years with the U.S. Fish and Wildlife Service, including a stint as its director. “There were times in the past where we faced budget cuts, or debates over some regulations. But the push to take away the regulatory framework that has been essential to fish and wildlife for so many decades makes no sense–not even for the economy.

“The forces at work now really are unprecedented.”

Those forces are creating a perfect storm that could cause irreparable damage.

How the Storm Has Formed
To understand the peril our sports are in, you have to first acknowledge the basic struggle in conservation: money. Private industries using public resources–air, water, land–don’t want to pay more for that privilege, so they see almost all regulations as adding to their costs. The people we elect to Congress are supposed to balance those competing interests.

Here are factors that combined to create the present situation:

The Bad Economy
With the push to reduce the deficit, sportsmen expected federally funded conservation programs to take a hit. What they didn’t expect was an all-out assault.

But the Great Recession gave extra ammunition to industry. Costly environmental regulations, they claimed, were forcing them to lay off workers, adding to the high unemployment rate. (The facts, as you’ll see, show something else.) But the shout went out and has never diminished.

The Election
The economy is always a major factor in general elections, but this year it is expected to be No. 1. Industry lobbyists have been labeling anyone who supports environmental regulations as a job killer who favors bunnies over humans. With millions of people suffering economically, the tactic has been working. Even President Obama backed away from important deadlines on air–pollution regulations.

The Lobbying
Sportsmen’s conservation groups, largely nonprofits, have always had to rely on the strength of their arguments and access to key -decision-​-makers to compete with heavily financed industry lobbyists. That was always a David vs. Goliath match, but a recent Supreme Court ruling allowing unlimited corporate contributions has basically made the giant twice as tall, while David is still using that slingshot.

In the first 11 months of 2011, oil and gas interests spent $110 million lobbying; electric utilities, $105 million; and real estate, $50 million. Those numbers are expected to soar even higher during the 2012 election cycle. For an idea of what to expect, consider this: Since 1998 the broader energy industry–oil, gas, and electric utilities–has spent $2.7 billion pushing their interests. Lobbyists like to say money doesn’t buy votes–it buys access. With that much money, sportsmen’s groups are wondering how much access will be left over for them.

The Newcomers
Perhaps most troubling is the cold shoulder sportsmen’s groups have been getting from some in Congress, especially freshmen GOP members. During the many budget battles last year, these new hard-liners demanded cutbacks and elimination of environmental protections in return for support of bills to keep government open. While sportsmen were able to get the ear of veteran Republican congressmen, those same congressmen told them the politics meant hunter-and-angler groups would first have to get the newcomers to soften up.

Conservation leaders say they have spent a lot of time educating these newcomers on the issues, but by the end of the year they had changed few votes.

Individual Responsibility
That’s why conservation leaders are turning to everyday outdoorsmen and outdoorswomen. They say the only tools they have that can counter their opponents, and the sound-bite debates of the election year, are the voices of hunters and anglers.

“That’s the only thing that has a chance of allowing us to sustain conservation,” says Hall. “[The sportsmen’s lobby] has some great, dedicated people working Congress. But at this stage, it’s hearing from the individuals that will make a difference.”

The message should stress not just the value of outdoors traditions to our lives but also the cold, hard facts combating the arguments that favor cutbacks. Studies show that conservation spending and even environmental regulations don’t hurt the economy; they actually add jobs and income.

Thousands of companies employing millions of Americans could be shut down if those regulations and programs are cut or even loosened. And the damage to the U.S. economy will be severe.

The facts are in “The Economics Associated with Outdoor -Recreation, Natural Resources Conservation and Historic Preservation in the United States,” a recently released study commissioned by the National Fish and Wildlife Foundation.

The numbers are staggering: 9.4 million jobs; $107 million in federal, state, and local tax revenues; and $1.06 trillion in total economic activity are being put at risk.

For example, GOP House members have repeatedly blocked attempts to restore Clean Water Act protection to 20 million acres of temporary wetlands and 2 million miles of streamsides that were removed by Supreme Court decisions in 2002 and 2006. Those congressmen parrot cries from developers and some agricultural interests that these regulations cost profits and jobs.

What they don’t tell you is those rules are essential to the thousands of owners and employees at fly shops that contribute $658 million annually to the economy–not to mention the thousands of guides and outfitters that take anglers to those streams.

“[Sportsmen] better wake up to what the House is trying to do before it’s too late,” says Jim Klug, chairman of the American Fly Fishing Trade Association. “Our industry depends on a clean environment, and if you take that away, you take away entire industries.”

The same forces in Congress have been targeting regulations to curb carbon emissions, a major contributor to global warming that is causing the seas to rise. Yet at the current rate of sea-level rise, within 50 years many estuaries along the Gulf Coast–including the Mississippi River Delta–may be submerging, leading to a collapse in the multibillion-dollar fishing industries.

Ryan Lambert, owner-operator of Cajun Fishing Adventures in Buras, La., knows what that means. He employs 15 guides and a housing staff of 20.
“When that marsh goes, my business goes–and all those families will be out of work,” Lambert says. “The same will be true for all the guides and lodges and tackle stores along the Gulf.”

Even the claim that regulations are to blame for the high unemployment rate has been proved incorrect.

The Bureau of Labor Statistics, which collects information from companies, found that in 2010, 0.24 percent of those laid off lost their jobs due to “government regulations/intervention.” Almost 13 percent were laid off due to insufficient demand.

Getting that message to Congress is critical. You can find the name and contact information of your delegates at -contacting​the​-congress.org, but you have to act soon.
“Sportsmen are very passionate about gun rights,” Martin says, “but what does it matter how many guns you have if you have no place to hunt and nothing to hunt?

“And that’s where we’re headed right now with this Congress. Our sportsmen had better get passionate, and get involved now.”