Few moments in fishing are more enjoyable than when a big largemouth crushes a topwater lure on a still summer... 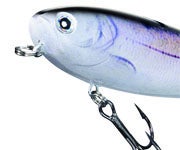 Few moments in fishing are more enjoyable than when a big largemouth crushes a topwater lure on a still summer morning. For decades, fishermen have enticed bass into making those explosive surface hits with the zigzagging walks of Zara Spooks, the chugging splashes of poppers, and the gurgling buzzes of propeller baits. The lures haven’t changed much since your granddad tied one on, because there hasn’t been the need. Today’s lure market, however, is all about ingenuity, and designers have to build a better mousetrap. The clever revamps of these three classic topwaters are meant to replace those old standbys.

Walk Easy
“When I first started bass fishing, I struggled to make a Spook walk correctly,” admits Allen Borden, owner of ABT Lures. “Then when I would finally get it right and get hit, I’d mess up on the next cast.”

Borden is not alone; consistently making a Spook “walk the dog,” or achieve a steady side-to-side cadence at a slow speed, is difficult for many fishermen. That’s why he developed the 5-inch King Dawg ($12), which can be walked right out of the box by anglers of any skill level. The secret lies in the weight-shifting joint set back in the body, and a forked tail that acts like a rudder, Borden says, steering the bait left and right at any speed with simple, straight rod jerks. “It will rarely move in the same direction twice.”

I fished this lure last fall and can attest to its ease of walking. The King Dawg will truly shine on windy, choppy days when walking a Spook can be a challenge.

Adjust the Pop
If Borden’s King Dawg has remastered the walk, the 4 1⁄4-inch XPod from Japanese lure maker Megabass ($34) has refined the pop. This lure’s hinged jaw can lock in seven different positions, letting you dial in exactly how much water you want to throw and adapt the bait to any water conditions, from flat calm to choppy, says Yuki Ito, Megabass’s CEO. “There is also a fixed internal carbon ball and a moving steel ball that collide on every twitch,” he says.

For a collector of Japanese imports, $34 is not an outrageous price. For the average weekend angler, it’s through the roof. But consider that these lures are well-crafted works of art. The jaw hinges lock in place with a solid click that feels sturdy and dependable. Behind the gills are vents that allow water to pass through and create a more pronounced wake. Like many other baits coming out of Japan, it displays a level of engineering detail not found in all major U.S. lure brands.

Show Some Belly
Ask 16-year bass pro Kelly Jordon what the most important feature of a topwater is, and he’ll tell you it’s how the bait looks when stopped. “You’ll catch fish reeling a prop bait across the surface,” Jordon says. “But if you quickly rip it and pause for three to 10 seconds, you’ll draw more strikes.”

To make sure bass like what they see during that pause, Jordon helped Lucky Craft develop his signature bait, the Kelly-J ($15). Two oversize propellers spin at the head and tail. In between is a big belly, similar to that of a lipless crankbait. “The bait sits really low in the water,” says Jordon. “On the pause, the profile looks very natural.”

I’m hoping the big stubborn bass in the pond up the street thinks so this summer.