How I Fish: An Interview With Ryan Lambert of Cajun Fishing Adventures in Buras, Louisiana

Interview by Mike Toth When people were driven out of Acadia in Canada in the 1700s, they eventually landed in... 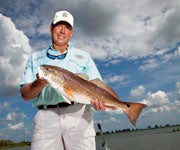 When people were driven out of Acadia in Canada in the 1700s, they eventually landed in Louisiana. Acadians became Cajuns. They were a bunch of misfits run out of Nova Scotia. You go up there today and it looks the same as here. Same people, fishing for a living.

I was born in New Orleans. When I was 4 years old, Daddy moved us out to the country, and I’ve been here ever since. I’m a wannabe Cajun.

Back in the late ’70s, early ’80s, I had a sporting-goods store, little bait shop. People would come in and ask for guides, but there were no guides around. So I said, “I’ll take you out.” Next thing you know people were calling me from all over.

Back in those early days, I would rent trailers for fishermen who were coming down so they’d have a place to stay. I’d always rent the two best trailers, but the rest were ratty, and the fishermen would get charged $10 just to take a shower. So I said, “I’m going to get my own lodge.” I bought land and opened up in 2000.

I love the people that come to my lodge. It’s like meeting new friends every time.

My biggest redfish weighed 56 pounds. Got him on a chartreuse grub. Sight-fished him. Caught one 50 pounds a couple of weeks ago.

In my lifetime I’ve seen 99 percent of the land go away on the west side of the river. Literally disappear. You’d see an island or a strip of land one year, it would be gone the next.

We cut off the Mississippi River by building the levees for flood protection and navigation purposes, not thinking it would cut off life-sustaining freshwater and sediment supply for the estuary. We didn’t realize it then, but we do now.

We know how to fix the delta, but it’s not being done. It is extremely easy to fix, because all you need to do is reconnect the river in strategic spots to make the sediments flow like Mother Nature intended.

The whole place is so special. To an outdoorsman, this delta is on the same level as the Grand Canyon. It ought to be a national park. It’s of significant importance to our country.

There are little bayous down here where people lived. Children were born there. Men would go fishing or shrimping off their dock, and they’d leave through their back door to duck hunt or run a trap­line. Now it’s nothing but pilings in the middle of the bay. You can weave right through them on your boat. Skeletons.

When you’re running a boat in the Buras [Louisiana] area, 80 percent of the time, you look at your GPS, it tells you your boat is on dry land.

Originally, oysters were farther out in the Gulf. But over the years the land has degraded and the oysters are moving closer to land. Now we have shrimp in bayous that used to be completely freshwater. If it keeps up, they’ll have shrimp in New Orleans before too long. But if the degradation keeps up, it won’t support oysters and shrimp.

Katrina. Had 206-mph winds and 24 feet of water in my lodge. Water stayed inside it for 43 days. I had no electricity or water for eight and a half months. And the fishing was unbelievable. You could fill up two 48-quart coolers with trout and redfish in an hour.

The oil did not come in for a long time. Then you’d see tar balls, then oil on top of the water, then dead fish, dolphins, pelicans, turtles. Now, shrimp are down 60 to 80 percent. Crabbers are complaining.

This is a very special place in our world. You need to see it before it’s gone.

_From the September 2012 issue of Field & Stream magazine.

Watch a video on the state of the area compiled by the National Wildlife Federation below:_