Something In The Night: Beat The Heat by Fishing After Dark

Creatures of all sorts come out at dark–including fish-crazed anglers hoping for a break in the heat and chances at... 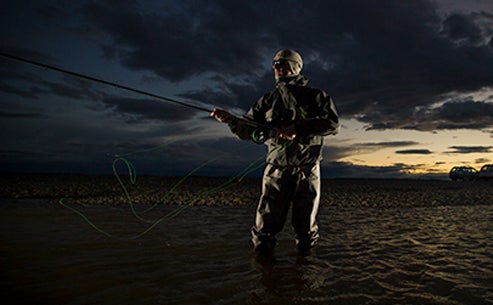 Creatures of all sorts come out at dark–including fish-crazed anglers hoping for a break in the heat and chances at monster trout, bass, cats, and more.

Since neither of us could drive, my buddy Vernon Hedgecock and I would walk to Oak Hollow Lake, jump the gate, and fish from a dock’s dark end where the security lights didn’t reach. Many a night I lay there half asleep with one eye cracked open for a patrol car and the fishing line between my toes so I would wake up with the bite. I cut my fishing teeth in the darkest hours of the night, and I still love to pound a lake or creek when it’s just me, the bats, and a few bellowing bullfrogs. I love wading in the dark. I love the scary feel of the canoe bumping some unseen log. DEET in my nostrils brings back delicious memories. Some from years gone by. Some from just last week.

August is the time to roll out when the sun goes down. It’s the time to find a whitefly hatch on a bronzeback river and work popping bugs in the black dark. It’s the time to lob big, nasty streamers into big, nasty logjams where big, nasty brown trout prowl. It’s the time to work a Jitterbug over every square inch of a 2-acre farm pond–its gluk-gluk-glukking the soundtrack of a summer childhood. Few things can beat sunrise on the water. One of them is moonlight.
Black Magic
Mr. BoBo turned me on to night fishing, which is a little odd since I never fished with him. Most of the neighborhood kids knew of Mr. BoBo because he was once bitten by a copperhead but refused to see a doctor. He sat on his front porch for weeks while his foot swelled up and split open like a watermelon you dropped from your bike. This was back before zombies and video games and even Tammy Faye Bakker, and the sight of human flesh in gruesome condition could keep young boys up at night.

But I was intrigued by Mr. BoBo’s overnight disappearances. He’d head out early on Friday evenings, and I’d watch the tips of his cane poles and fiberglass rods wave as he drove away, sticking out of the rolled-down rear window of his Ford Galaxie 500. Some nights I’d sprawl out in bed and imagine that mysterious world of lantern light and men’s hushed voices, cigarette smoke and fish pulling hard in the dark.

On Saturday afternoons, Mr. BoBo would pull back into his driveway, and I’d bolt out the screen door and run over to peer into a 5-gallon bucket slam full of catfish, bass, bluegills, and the occasional eel. What I remember most was Mr. BoBo nailing those cats to a pine tree with eightpenny nails, slicing around their heads with a Case jackknife, and pulling off their hides with steel pliers. Mr. BoBo recognized a kindred spirit, and long before I ever globbed a worm on a hook I learned to skin catfish at the old man’s side.

Which led me straight to the lonesome dark pier on Oak Hollow Lake. Night fishing was a simple affair back then. Vernon and I carried two rods apiece, max. A tin of hooks and lead split shot we mashed with our teeth. I don’t carry much more today. If I’m on the move, I take one rod and a small chest pack loaded with a half dozen lures. That old Jitterbug still does the trick, and a big black spinnerbait is good medicine for covering lots of water fast. I’m not a big fan of snap-swivels, but they’re handy in the dark. If I’m hunkered down, old-school style, on a dark dock or pier, I’ll upgrade to circle hooks. I land more fish and gut-hook virtually none. A small LED rod-tip light will alert me to a bite. I no longer worry about tipping off the po-po.

It doesn’t take long to get back into the groove of night fishing–it’s like riding a bike–even after a long winter in the deer woods and spring’s six-week mish-mash of chasing turkeys and shad. I walk to the water’s edge and fire off a cast. I hear the line zinging through the guides, and I’m so in tune with it all that I can feel the lure arcing toward the stars and darting back down to earth. I don’t even have to hear it hit the water.

It all takes me back to those Mr. BoBo days. And those nights, shared with fireflies and cicadas and my first Ugly Stik, and my mind skipping like a stone between how I was going to pull off the three-point turn on my driver’s test and whether Jill Zimmerman would say yes to a Friday-night football game date or shoot me down cold. Heavy thoughts in those fast-moving days. A lot on my mind for an August night, and– Whoa! My toes are tingling. I think I have a bite.

The Palomar is crazy strong, and a cinch to tie in the dark. Thread a 6-inch loop of line through the hook eye (1).

Tie a loose overhand knot so the hook dangles down from the middle (2).

Slip the loop formed by this overhand knot over the hook (3).

Moisten loops and pull both the tag and standing ends together, making sure that the finished knot rests against the hook eye. –T.E.N.

From the August 2013 issue of Field & Stream