Photo by Gorman Studio I can feel it coming, like a shad senses spring freshets trickling into the sea. Scientists... 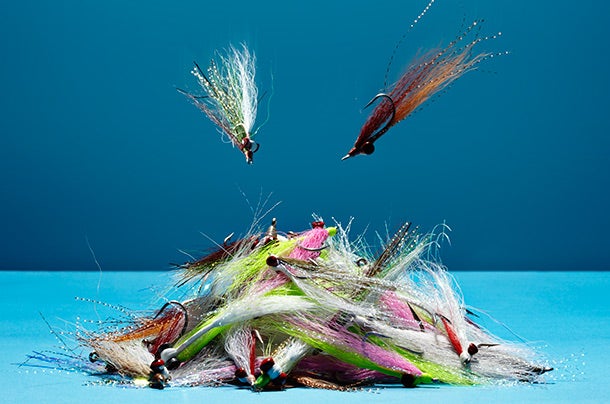 I can feel it coming, like a shad senses spring freshets trickling into the sea. Scientists have a word for this seasonal compulsion: zugunruhe, an innate restlessness that grows as a migration approaches. It strikes ducks on the South American pampas, striped bass in the sounds, and fly-tiers watching the daily highs climb toward short-sleeve weather. I make my way to the basement, orienting toward spring, and clear off the fly-tying table. It’s Clouser season.

I don’t tie many kinds of flies, but there are times when I tie a lot of Clouser Minnows. This streamer may be the most famous fly ever. Developed by Susquehanna River smallmouth guru Bob Clouser in the 1980s, the classic version sports dumbbell eyes, a white deer-hair belly, strands of Krystal Flash, and a chartreuse back. Lefty Kreh is said to have caught 86 species on Clousers. I’m nowhere near that, but I’ve pulled a Clouser out of a pretty wide sampling of fish lips. Bass of the various tribes–largemouth, smallmouth, striper. Trout and char, bluefish and mackerel. You can fish a Clouser on a steady retrieve, or make it dive, skitter, and flutter in river current. Depending on the presentation, it’s a minnow, crayfish, sand lance, leech, or hellgrammite. It’s about the fishcatchingest fly out there.

Assembly Line
I lash down the eyes in the traditional spot, set one-third of the length of the shank away from the hook eye. One reason I’m attracted to the Clouser is that it’s a particular pattern you can follow like baking a cake, sure, but it’s also evolved into a general form of fly tying–heavy eyes, sparse belly, midsection of flash, a contrasting back. It’s a loose set of guidelines, which suits my unschooled approach to the fly bench. Since this is my first appointment at the fly vise in months, I’m sticking to the classic design. “Just crank them out,” I mutter to myself. “Keep it simple.”

After the belly hair is snug, I swivel the vise so the hook rides point up and tie in the Krystal Flash. Already I have to gird my loins against flights of fancy. I need at least one fly box full of classic Clousers before I’ll allow myself to color outside the lines–which I’ve learned over the years can pay off on the water.

Take my shad flies, for example. Those were some beauties. One winter’s night at the tying bench I completely gave in to a gaudy yarn fetish and tied a fly box of Clousers with hook shanks wrapped with hot pink and pearlescent yarns and holographic bellies of shimmering opal. Straight out of Cirque du Soleil, they were a little embarrassing to pull out at the public boat ramp but, man, did they whack the shad. And they weren’t the only unconventional Clousers to come up big. Once, short on time before a week-long canoe trip down Ontario’s Missinaibi River, I spat out copper-flash Franken-Clousers with tinsel highlights that would have sent Bob Clouser straight into sackcloth and ashes. When I pan-fried those walleyes over a cedar fire, though, I couldn’t taste the ugly.

Back at the vise, I fight a temptation to pimp the fly. Wouldn’t a little sprig of fuchsia chenille spruce things up a bit? Maybe a glass rattle? Not today. I tie in a back of chartreuse deer hair, stacked neatly and as trim as Clark Gable’s mustache. Then I whip-finish the head wraps and dab Zap-a-Gap on the threads. There. A nice one, I’ll admit.

I’m in full sweatshop mode, cranking them out. The Clouser’s design makes it ride hook-point up, a huge benefit, but the tangled, rocky, rooty riverbottoms where I fish still eat Clousers like movie popcorn. I’ve never tied enough. I clamp another 2/0 hook in the vise jaws.

Right then, I’m hit with a moment’s hesitation. There’s a spot on my local striped bass river where a sandbar drops off into a deep trough with sides sheer as a tiger pit. It’s the only real structure in that stretch of the river, and when the bite goes cold elsewhere, that trough always seems to hold fish. I’ve worked the stripers over pretty hard there in the past but I think I can do better–by doing things a little differently.

I shut my eyes and imagine that trough–current ripping down the sandbar, stripers nosing into the flow. I place the dumbbell eyes in their customary position, then move them about an eighth of an inch toward the hook eye. It’s going to crowd the eye, but more heft toward the head will make this Clouser drop like an anchor through a river roiling with spring rains–down into the bottom of the trough where big striped bass stricken with zugunruhe won’t turn down a little deer-hair manna from heaven.