Photo by Travis Rathbone Frog baits can lose their potency over time if you keep throwing that same pattern over... 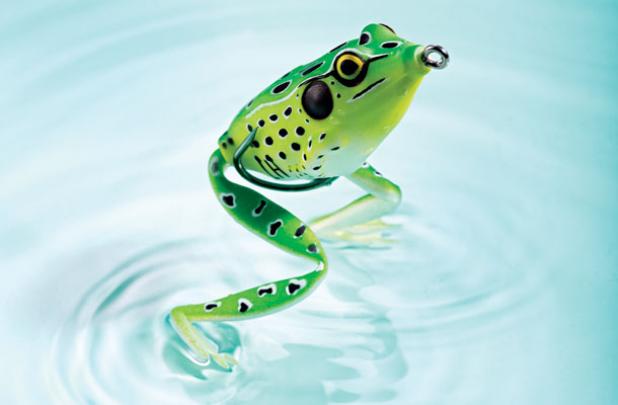 Frog baits can lose their potency over time if you keep throwing that same pattern over and over. Rather than look for the next great frog, I started tweaking my favorite patterns to re-up their hog-fooling capabilities–and I’m not the only one doing this. My frog tweak, plus two from pro anglers Jamie Pistilli and Jonathon VanDam, will turn the heads of the biggest, most pressured bass in the lake.

I add a clear suction cup to the head of my hollow-body frogs to create a surface disturbance that mimics the sound of a frog plopping off a lily. Poke a hole through the cup’s middle, thread it over the hook eye, and secure it in place with superglue. When I work the frog through open water, the cup creates enough popping action to attract more attention without spooking fish. If fish are wary, push the suction cup backward, like a broken umbrella, to reduce the pop and make the bait slide from side to side.

Big City Fishing host Jamie Pistilli drowns his soft-plastic frogs by Texas-rigging them on a 5/0 hook with a split shot a foot up the line. This way, the buoyant frog hovers below the surface. Weave the bait through lily stalks and be ready for reaction strikes. “A straight retrieve at medium speed produces the most strikes,” Pistilli says. “But make sure you always look for movement behind the bait before you yank it out of the water. Bass will follow right to the boat.”

Pro Jonathon VanDam cuts 1⁄2 inch off each leg on sinking soft-plastic frogs, which reduces the amount of noise the bait makes in the water but maintains just enough kick for the frog to stand out. He pitches the frog to a hole in the grass and lets it fall. The flutter on the drop looks like a real frog swimming below the grassline. The short legs make the frog look “smart,” VanDam says. A real frog doesn’t want to draw attention by fully extending its legs when it swims.

1. Lunker Hunt Lunker Frog
These hollow-body baits with extending and retracting legs are realistic and deadly on their own. But add a suction cup to one of these lifelike amphibians, and it becomes just lethal ($7; lunkerhunt.com).

2. Bog Baits Natural Bog Frog
With naturally extended legs, the floating version of these baits is ideal for mimicking a frog swimming subsurface. They are Jamie Pistilli’s favorite for Texas rigging ($6; bogbaits.com).

3. Strike King Rage Tail Toad
This is VanDam’s choice for hole-­punching. The long legs offer plenty of extra length to trim back, creating a frog with a more subtle swimming and falling action ($5 for five; strikeking.com).