I recently spent 30 minutes speaking with professional bass angler Kevin VanDam, after which I concluded that he is a... 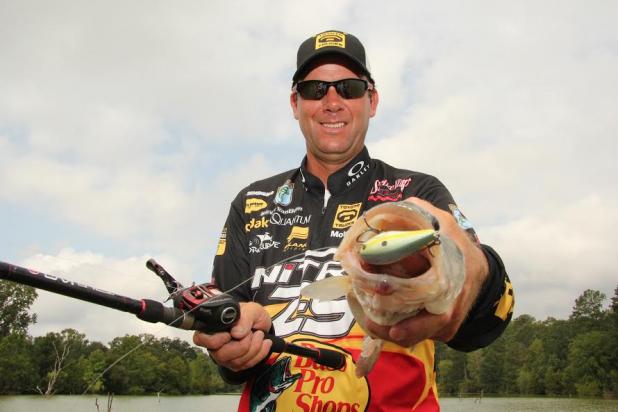 I recently spent 30 minutes speaking with professional bass angler Kevin VanDam, after which I concluded that he is a manipulative and mean-spirited phony. He began the conversation, for example, by claiming to be “a big fan” of my work. Things just went downhill from there. Throughout the interview, KVD was unfailingly unassuming, accessible, humble, and positive.

As you read what follows, remember who VanDam is: The dominant angler of his time and perhaps of all time. He is closing in on $6 million in prize money. He is a four-time Bassmaster Classic winner and seven-time Toyota Tundra Angler of the year. He is 46, has been on the tour for 24 years, and has qualified for the Classic 24 times. Other anglers use words like, “top dog,” “king,” and “warrior” to describe him. In a recent Sports Illustrated feature, Mike Iaconelli said, “It’s who can outsmart the fish, and that guy from Michigan tends to do it better than anybody else in the world.”

Pro Brandon Palaniuk said this: “Mechanically, most guys are on the same level. Mentally, he’s on a whole ‘nother planet. That’s what separates him and that’s how he gets in other guys’ heads.”

His buddy, fellow pro Gerald Swindle said, “VanDam will play hurt. I’ve seen him take a motorcycle helmet, lift the shield up, puke straight out all over the console, put the lid down and take off running. That’s a competitor.”

But it’s Mark Zona, co-host of “The Bassmasters” TV, who may have the best insight. “Kevin VanDam is the sport of bass fishing. Period … He’s there to do one thing, and that is to step on your throat.”

In short, you don’t dominate an entire sport for decades by taking Nice Guy pills. But, hey, decide for yourself.

Bill Heavey: You’ve won the Classic four times. The last was in 2011.

BH: How do you explain the slump?

KVD: Um, you know, I don’t know. It’s just one of those things. The way the Classic is, it’s an all or nothing event. Second place means nothing. I’ve gone 4 for 24 and that’s not very good. On the other hand, only one other person has done it four times. I’m not scared to go out and blank, abandon what I’ve done if I feel like I need to change what I’m doing. The last couple, in my own mind, I’ve made the right decisions, but a few little things have hurt me. That’s all I can say.

BH: You’re known for throwing crankbaits, which a lot of people think of as “dummy” baits. Do you think you fish them because you’re intimidated by other baits?

KVD: No. I fish’em because I think in a lot of cases they’re the best tools. You can find one to fish every depth from shallow to deep. And with the right presentation — whether it’s ripping, bouncing off wood, start-and-stopping — you can make bass react when they aren’t necessarily feeding. There’s no question in my mind that fishing is a science. Where the fish are, what they’re up to, everything they do is based on environmental conditions. So there are a jillion ever-changing variables. It would be like playing golf, except that the pin moves all the time.

BH: I read somewhere that you change hooks several times a day? Do you just get bored out there or what?

KVD: It’s that I want to control all the variables that I possibly can. Look, the competition out there is so tough, so tight, that losing one fish can mean the difference between winning and losing. Or it can knock you down 20 places in the standings. So you have to eliminate as many mistakes as you can. So, for example, I want to have the right rod for a given technique. And if I’m grinding a crankbait into a bottom of rock or gravel, the hooks — even with the great hooks we have today — can get dull. And it’s faster to change hooks than to sharpen them, so that’s what I do. If I’m fishing a tournament, I’ll put fresh line on every day. Why? It’s a variable, something I can control. And my mindset, you know, is why wouldn’t you do everything possible to put yourself in a position to succeed? So I use braid, mono, and fluorocarbon, because each excels at different things. I only use mono on topwaters, because it floats better. I probably use fluorocarbon 75 percent of the time, on cranks, jerks, jigs, dropshots. It has a small diameter, it’s virtually invisible, has almost no stretch. Those properties enhance almost every technique I use.

BH: You’re known for bringing cookies made by your wife, ‘Sherry’s Lucky Cookies,’ to every tournament. What’s in them?

KVD: (Laughs.) It’s a longtime family recipe, somewhere between a tollhouse and a peanut butter cookie, rolled in sugar. There’s about a thousand calories in each one. And I fish fast, so I need those calories. It got one of those fitbands for Christmas and it said I burned 5,500 calories in the first day of the Classic. That’s the unique thing about what we do. It’s an eight-to-nine-hour day during a tournament. And there aren’t any timeouts. But it’s not a sprint, it’s a marathon. So I want my lure in the water every possible second. I have a high metabolism, I’m always moving. (Laughs) I probably should have been on Ritalin as a kid. I was probably ADHD. Guess I still am.

BH: Your dad’s a successful contractor. Your siblings are all very successful, accountants, business owners. When you all get together, do they ask, you know, ‘When is Kevin going to get a real job?”

KVD: Not really. My dad went to most of my tournaments with me when I was starting out. My parents didn’t try to deter me at all. My grandfather was on me all the time, though. Before he passed, he got to see some of my success. I think he started to figure out that there’s something to this fishing gig. But he never got to see my highlights. That’s one thing I wish he could have seen.

BH: You were quoted somewhere as saying that you could “fish spinnerbaits around tight cover all day long, not get a bite, and still be happy.” That doesn’t sound like the Kevin VanDam I know. So my question is this: Were you were on drugs when you said that?

KVD: No. And that quote is kind of taken out of context. What I meant —

BH: Wait, what does “context” mean?

KVD: Are you serious? You don’t know the meaning of the word, “context”?

KVD: Right. Anyway, what I meant by that was in spring, when the lake is flooded and the water’s stained, and the bass move into the shallows, up tight against the willows and the bushes before they spawn. I love fishing a spinnerbait against that tight cover then. It’s just a kind of fishing that I really enjoy.

BH: I’m sure you’ve been asked this a million times, but it’s a question that still fascinates me. What is it that separates a guy like you — or any elite athlete, a Tiger or a LeBron or Peyton Manning — from the rest of the pack.

KVD: It’s the decision making. The mental part of the game. Lebron James when he has a 50-point game or Tiger when he shoots a 63. Or me on the final day of the Classic when I caught 27 pounds — you can feel it, you know it. I wish I could get in that zone or situation everyday. All I know is that when it’s happening, you know it’s going on.