by Joe Cermele Wall Size: Guides and bass pros agree that 5- and 6-pound smallmouths are respectable fish, and there... 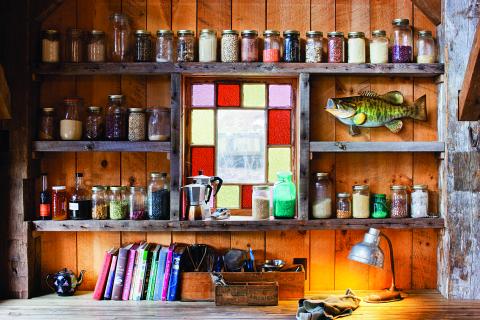 Wall Size: Guides and bass pros agree that 5- and 6-pound smallmouths are respectable fish, and there are thousands of waters in North America that hold fish this size. But it takes the right mix of habitat, conditions, forage, and bass genetics to produce a jaw-dropping and mount-worthy 7-pounder. Don’t expect to bump into a fish that big in the local creek where you rail on 12-inch bass. Catching a 7-pounder requires dedication and often the willingness to trek to the right body of water.

Special Case: Seven pounds might be the goal of a conventional angler, but if you get the right conditions with the right feeding scenario and stick a 5-pounder on the fly, pat yourself on the back and get a replica made. It doesn’t happen often.

✖ Barrie, Ontario This city sits on the shore of Lake Simcoe, which is world-­renowned for growing bass to the 8-pound mark, thanks to a wide variety of structure big fish crave and a healthy forage base.
✖ Celina, Tenn. Dale Hollow Reservoir gave up the 11-pound world-record smallmouth back in 1955. It was no fluke. Today, the 28,000-acre reservoir (which also stretches into Kentucky) remains famous for trophy bass.
✖ St. Clair Shores, Mich. Lake St. Clair has the perfect mix of prime spawning habitat and cool summer water temperatures that sustains a good number of 7-pounders.

Home Waters: Operating on the eastern end of Lake Erie out of New York’s Buffalo Harbor, Campbell has been guiding clients to trophy smallmouths for 20 years. He also fishes in local and national tournaments. Though there always has been a good smallmouth fishery in Erie, in the last decade the number of true giants has been on the uptick, thanks largely to a reduction of pollution. Erie now ranks high among the best smallmouth waters in North America and even has an early trophy smallmouth season, with a bag limit of one fish measuring 20 inches or better.

Trophy Hunting: “If you want a 7-pound smallmouth, late April into early May is the time to catch it,” says Campbell. “The magic water temperature is 40 degrees.” That’s when he focuses on areas 30 to 50 feet deep with a soft bottom where there is slow current or none at all. Such places are classic smallmouth wintering haunts; while smaller bass begin to move shallow, the big fish stay hunkered in the depths longer. The trick is making the right presentation at the right speed.

Top Lure: “When the fish are still fairly lethargic in early spring, I have the best success dragging a tube,” Campbell says. “I’ll let out extra line and slowly drift or power over the areas where I know fish are holding.” His go-to plastic is Yum’s 4-inch F2 2ube in a dark green or brown tone.

Top Bait: If the fat females aren’t responding to a tube, Campbell will switch to an emerald shiner dip-netted on the morning of a trip. “I’ll run a 5- or 6-foot length of 6- or 8-pound mono to an Octopus hook and connect that to a three-way swivel. Then I’ll use a short length of 6-pound mono to connect the weight to the three-way.” Campbell drifts slowly along, letting the shiner rig tap the bottom.