Photo via Zoombait.com You used to have only two options for catching big summertime bass lounging beneath lily pads and... 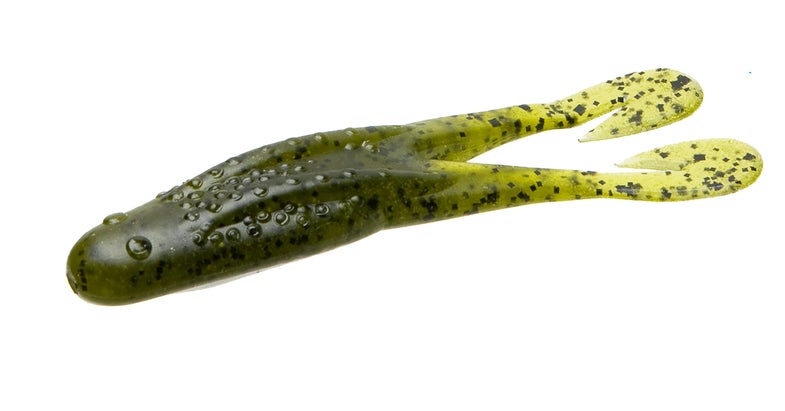 You used to have only two options for catching big summertime bass lounging beneath lily pads and matted grass: (1) Punch through the vegetation with heavy jigs and Texas-rigged baits, then horse fish out of that heavy cover; or (2) Draw them up with snagless frog lures fished on the surface, and reel in your catch across the tops of the weeds. Both methods work, but fish caught on jigs get tangled up easily in the grass, and a floating frog’s action is limited to the surface.

The new toad baits provide a third option, and it’s by far the best. These lifelike lures feature lively legs that gurgle when retrieved on top and kick vigorously when you let one sink into gaps in the weeds. You don’t have to wear out your arm retrieving them through thick cover, as you would when fishing a jig, and toad-hooked bass cause fewer tangles.

I like to use toads in two-tone natural patterns, such as a green or black back with a yellow or white belly. White is also a popular color, but bring a few darks like black or junebug for those times when bass shy away from something bright.

The minimum tackle for sinking frogs is a 7-foot medium-heavy baitcasting outfit with 20-pound-monofilament. Many anglers use 7½-foot flipping rods and 30- to 50-pound-test braided line. This style of fishing will have you battling some of the largest bass that live in a given body of water. It takes stout tackle to horse them out of the vegetation before they bury up in it.

TOAD TACTICS
Swim a sinking frog over openings and off the edges of weedbeds early and late in the day. A slow, steady retrieve that makes the legs undulate on the surface usually works best, but up the pace occasionally in case bass want something faster.

When bright sunlight pushes bass into the shade beneath the greenery, drag a sinking frog across matted vegetation in the middle of the day. Alternate between a steady retrieve, a quick pull-pause cadence, and long pauses with gentle twitches until the fish tell you which they prefer. Don’t forget to let the frog sink into any dark holes.

Should a bass blast through the mats and miss one of these baits, which is common, stop retrieving. The frog will drop into the crater that the striking bass created and is likely to coax a second bite.