Feeling like you're fishing with reckless abandon? Try these suggestions for hooking up with more and bigger trout. 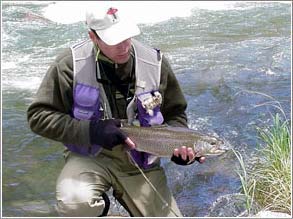 The trout’s initial surge nearly wrenched the delicate little spinning rod out of my hands. A heartbeat and a half later, the biggest rainbow I’d ever seen on that stream tailwalked out of its hiding hole and began gyrating as if possessed.

But I might never have caught that dervish of a rainbow had I not heeded several of the following time-tested techniques for catching trout on a spinning rod:

1. Work upstream.
Because their eyes are located on the sides of their heads, trout enjoy an ultra-wide-angle view of the world. Fortunately for us anglers, that view doesn’t extend all the way to the rear.

Knowing that, and knowing that trout almost always face upstream into the current, I approached the big rainbow’s suspected lie from directly downstream. The tactic worked. Crouching low, I was able to approach within 20 feet and make a pinpoint-accurate cast.

2. Cast where others won’t.
That rainbow lay in a deep, swirling gouge behind a wheelbarrow-size rock on the river’s far bank. Apparently, few fishermen ever bothered to wade the pool’s chest-deep waters to get into the proper position to cast to that enticing little pocket.

Don’t be lazy. Go to the trouble, even if it means wading a little deeper or hiking a little farther than usual. Cast over the sunken log, under the root tangle, or between the overhanging branches. You’ll catch more trout. Bigger ones, too.

3. Lighten up.
Most of the spinfishermen who fished the big rainbow’s pool used line far too heavy to fool the sharp-eyed fish.

The 4-pound-test monofilament I used enjoyed a couple of important advantages over heavier line. First, its fine diameter made it harder for the trout to see. More important, though, its thin cross-section permitted it to cut easily through the water’s surface tension, allowing me to fish much deeper using less weight and a smaller lure.

4. Use a strike indicator.
Because I fish upstream, I sometimes have trouble seeing the subtle line-twitches that signal a trout’s strike.

That’s why I now slide a 2-inch sleeve of brightly colored fly line onto my spinning line about 3 feet above my lure or bait. The bright, floating line acts like a flyfisherman’s strike indicator, instantly signaling the slightest disturbance of the lure’s drift.

When the big rainbow struck, it attacked my lure from the side. Had I not seen the strike indicator dart laterally, I might never have known to set the hook.

5. Lose your one-cent sinkers, not your five-dollar lures.
To get the lure deep enough to attract the rainbow’s attention, I had to use a little additional weight. Had I pinched the split shot directly onto the line, I might have lost the lure and the weight if the shot hung on a rock.

Instead, I left a foot-long tag end on the clinch knot I used to tie the lure to the line, then pinched one size B split shot onto the tag end. Had that shot hung up between the bottom stones, it would have slipped off the tag end with just a little rod-tip pressure, and my lure would have come free instantly.

6. Vary your baits according to your quarry.
Stocked trout and wild trout have very different dietary habits. Though they’ll eat most anything a wild trout might eat, stocked trout also can be caught on kernels of corn, dough balls, cheese, putty-like prepared baits, and other concoctions no self-respecting wild trout would even consider eating. Wild trout prefer insect larvae, worms, minnows, crustaceans, and lures that imitate those foods.

The big rainbow, a wild trout, had seen a steady stream of cheese balls and salmon eggs all day long. When my minnow imitation came swimming past his lair, he nailed itt.

7. Keep your bait fresh.
A little extra wiggle goes a long, long way toward catching trout. A dried-up worm or a sluggish minnow won’t draw nearly as many strikes as a livelier specimen of the same bait.

8. Feed them something small.
Smart, sharp-eyed fish like trout quickly learn to recognize phonies. You can even the odds by using smaller baits and lures. Use a single worm, not a gob of night crawlers. Use a pea-size hunk of cheese, not half a sandwich’s worth. Use a 1/16-ounce spinner, not a 1/4-ounce model.

9. Remember jigs and crankbaits.
Jigs, crankbaits, and spoons aren’t just for bass. Scaled down to the proper size, trout love them, too. A friend of mine slays both stocked and wild trout on traditional trout flies tied onto micro-jig (1/25- to 1/100-ounce) heads.

Personally, I prefer the convenience of crankbaits. Tiny minnow- or crawfish-patterned imitations are absolutely deadly on wild trout. The aforementioned big rainbow hit the tiniest shallow-diving Rebel then on the market. Since then, several manufacturers have begun producing micro-crankbaits for crappies and trout.

10. Employ magic.
There are a few “magic times” when trout seem to strike with more abandon than usual-at dawn, at dusk, immediately before a storm, and when a stream’s waters have just begun to rise after a hard rain.

If possible, time your fishing trips to coincide with these special moments. As was the case with the big rainbow, which struck during the daylight’s last moments, you’ll likely be rewarded with the trout of a lifetime.