Cutbanks can offer you a great shot at a trophy fish. 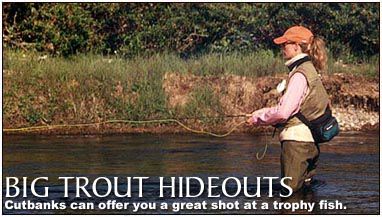 Wherever a stream’s current curls black beneath the bank, there is an opportunity irresistible to trout anglers. We can’t help but cast to cutbanks, because beside the bright riffles and transparent pools, a cutbank is a dark corner left to the imagination. And only big fish lurk in the imaginations of fishermen.

The Clear Cutbank
The most obvious cutbanks are typically formed on the outside corners of moderate- to fast-moving bend pools, where the main current angles toward and cuts into a high, erodible bank. The question is, where do the trout feed?

Look for soft spots just above and below the elbow, and look for obstacles that slow the current close to the cutbank. Suppose, for example, that our cutbank anchors a stump with a ball of submerged roots jutting into the stream. Here, a trout can hold comfortably behind the root ball and pick over the smorgasbord of food carried in the faster currents coming over the top and off the midstream edge of the root ball. If trouble comes, the trout can dart instantly under cover. The same advantages are presented by a large submerged rock, a sweeper, or a log running parallel to the bank.

The Subtle Cutbank
Some of the best cutbanks are not so obvious. There are slow bends and gentle curves where banks are only slightly cut. There are meandering meadow creeks where tufts of grass lean over subtly sagging lips. There are banks gradually carved by even currents, and others dug during spring floods and then left inconspicuously calm in summer.

All hold genuine promise. After all, a bank cut 4 inches deep hides a trout nearly as well as one cut 18 inches. Moreover, the gentler currents associated with these cutbanks are often more hospitable to trout. Here, fish don’t need major obstacles to slow the current. A slight irregularity in the bank, a small rock, or just some brush dipping into the water may well be enough.

And these cuts can shine when trout are surface feeding. When trout feed steadily on top, they often do so in slower water where they can hold comfortably near the surface and just lift their noses to feed. This is especially true during heavy hatches and on fertile streams. Here, it’s not unusual to look across to the gentle current beside a subtle cutbank and see a row of trout dimpling beneath the brush.

Drawing Trout Out
When trout are feeding, they commonly do so not under the cutbank but just off it. So cast to possible feeding stations near the bank first. Moreover, even if a hard-to-reach trout is feeding very close to the lip, as browns sometimes do, you can often move that fish. Trout will dart sideways to capture food, as long as the food item is big enough to justify the extra energy spent. For spinfishermen, a nightcrawler, salted minnow, in-line spinner, or jointed minnow plug fished near the bank can pull trout from tight against it. For flyfishermen, the same goes for streamers, stonefly nymphs, and big dries, especially big terrestrials where there is overhanging brush. (This tactic works best on relatively infertile waters, which applies to most rivers and streams.) If all this fails, then get under there (see sidebar).

Beating Brush
When overhanging brush keeps you from casting close from a downstream position, you can sometimes set up across from the bank and cast into openings in the brush. Otherwise, carefully position yourself upstream, cast to the top edge of the cut, and kick out line to let the bait or fly drift into the tunnel between the brush and the bank. You can even take this approach with spinners and plugs by easing the lure downstream slowly enough that the current imparts some action. Then twitch it back up. It’s like hot-shotting for steelhead, and the technique can be very effective.

When trout are surface feeding in gentler currents near subtle cutbanks, cast a dry fly down and accross. The even current allows for longer casts, it’s a better angle for getting good drifts beneath overhanging brush, and you’re less apt to line a fish.

In each case, if the cutbank has submerged roots, logs, or brush, it’s best to position yourself at least slightly across from your target, so you can quickly pull a trout away from the snags.

After all, when you feel a violent jolt, that monster you always imagine lurking under every cutbank will be a reality.