Secrets of the Pros: The Visionary

Champion angler Jay Yelas knows how to look for bass in all the right places. 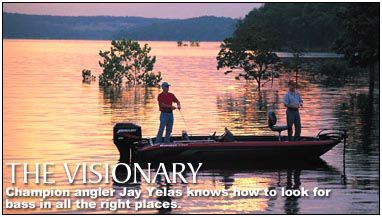 It’s a skill that will make or break a tournament angler: the ability to quickly figure out where bass are in a given body of water at any time of year. A pro bass fisherman must be able to figure out potential fish locations before the contest begins, so he can spend more time working the bass and less time searching for them.

And few pros are better at it than Jay Yelas, whose secret lies in first studying the water visually before he ever starts casting. “Just an hour of studying a lake’s basic characteristics from the shore or a boat dock will nearly always lead you to bass a lot quicker,” says the Texas pro.

Yelas, 37, has successfully used this visual study technique throughout his tournament career. In 2002 he won the highly competitive FLW Tour’s Angler of the Year title, then followed it several weeks later by winning the BASS Masters Classic. Competing in both professional circuits means Yelas has to fish a number of unfamiliar waters every year-but he doesn’t waste time getting to know them.

**[BRACKET “Flats”] **
“The very first thing I look for is a flat-a large area of shallow water less than 10 feet deep,” says Yelas. “It can be out in the main lake, in a cove, or even the back of a tributary creek.

“Bass are essentially shallow-water fish. Even when we’re fishing a body of water as big as Lake Ontario, we concentrate on some of the large flats that extend out from the shoreline.”

Flats, he explains, can be located initially with map study. Any large area in which the contour lines are far apart should be marked for on-the-water investigation.

“Flats can also be identified from the shore if they have vegetation or brush growing on them,” says Yelas. “Vegetation will support the entire food chain and is especially important to minnows and small baitfish, so it can be the key to your fishing. On lakes with sparse cover, practically any fallen log, boat dock, or weedy shoreline becomes important to bass, so finding the fish is easier. If a lake has a lot of flats or shallow cover, however, the bass obviously have more choices. You need to look for other features.”

[BRACKET “Vegetation and Timber”]
One of those features is a transition zone where two or more different vegetation types meet. Yelas finished third in the FLW tournament on Florida’s Lake Okeechobee last year by fishing small areas where bulrushes, peppergrass, and hydrilla grew together.

“When you see vegetation, you can immediately narrow your lure selection, too,” he says. “I’ll fish spinnerbaits or lipless crankbaits through the vegetation if it isn’t that thick, or I’ll work the edges with a jig or Texas-rigged plastic worm.”

Flooded timber, especially timber that edges a flat, is another key feature Yelas looks for because it may pinpoint a deep-water channel. Channels may be outlined by larger trees that typically grow along the banks of creeks and rivers.

“Although bass are basically shallow-water oriented, they prefer quick access to deeper water for security. This is what a channel provides,” says Yelas, “and having this deep water so close will make a flat more attractive.”

The type of flooded timber even provides a clue to whether bass may be present. Bass are nearly always more readily attracted to trees with limbs and branches, such as cedars and oaks, than they are to straight, limbless trunks, like pines. When the trees do have limbs, Yelas can swim lures like spinnerbaits and plastic worms through them. He works straight trunks more effectively with spoons or jigs.

**[BRACKET “Clarity”] **
Water clarity is another feature Yelas studies before fishing. “To me, any water with 4 or more feet of visibility is clear,” he says, “and in water like that, I change to smaller lures and lighter line, and work cover much more slowly and thoroughly.

“On the other hand,”” notes Yelas, “in water with just a couple of feet of visibility, I’ll use a spinnerbait or perhaps a crankbait that provides a lot of vibration, and I won’t fish as deep. Off-colored water brings bass shallow, while clear water pushes them deeper, or tighter to cover.”

Yelas avoids extremely muddy water, not because bass leave it, he says, but because they become much less active. But the very backs of tributary creeks are frequently the first places to clear from heavy runoff, and Yelas will target those areas.

** [BRACKET “Shoreline”] **
The more irregular the shoreline, the more habitat there is for bass, notes Yelas, and the points and coves are usually excellent places to begin fishing.

“The actual angle of the shore will also give you a lot of information about the lake,” Yelas says. “For instance, a lake dominated by a very steep shoreline typically will have fewer shallow flats. Instead, you may need to concentrate more on long points to find shallow water.

“On the other hand, the flatter the shoreline, the more shallow flats that lake will have, meaning the channels and dropoffs become more important.”

“If a lake has literally thousands of boat docks, you know that’s where the fish will be,” he says. “On the other hand, if a lake has only a few docks and piers, you won’t want to spend all your time fishing them.” Finally, what if the lake has few visible features? Look for forage, advises Yelas. Baitfish, which may be visible around the shoreline, are normally best spotted with a depthfinder when you’re on the water. In the spring and fall, bass tend to chase baitfish more actively, and whenever you encounter any type of surface activity, especially in tributary creeks, you’re usually close to bass.