A trend you can embrace--cheap prices, high quality. 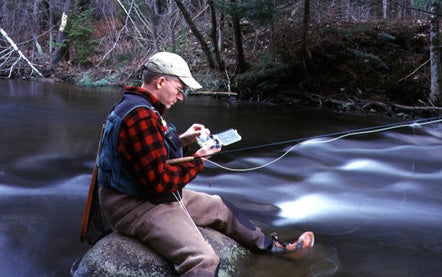 The one-rod flyfisherman, like a three-legged dog, can get along fine, but there are plenty of situations where he’s not properly equipped. For example, a 6- or 7-foot rod is great for small, brushy creeks; you’ll want a 9-footer for better line control on bigger water. A rod of 10 feet or even longer helps you cast when sitting low in a canoe or float tube. And multisectioned rods in various lengths travel well. Multiply those choices by the different line weights needed for varying circumstances, and the size of your rod collection swells.

Until very recently, the problem with this logic was price. Premium, high-tech fly rods-the ones that get all the publicity-now sell for $500 to $700 or more, and putting together a set of those can mean a second mortgage on the house. Fortunately there’s a new and largely unsung wave of fly rods offering excellent performance at modest prices, thanks to global economics and the Internet age. THE KOREAN CONNECTION **
Fly rods by Texas-based Temple Fork Outfitters have gotten lots of buzz over the past few years. Made in South Korea, they are good performers-and some sell for less than $100. Workmanship quality in Korean rod shops, as well as in those of Taiwan and mainland China, has improved greatly in recent years, while low labor costs keep prices down. And according to Rick Pope, the president of Temple Fork, the response from anglers gossiping on the Internet about his company’s rods has been so strong that its advertising costs have been minuscule. Of the high-priced, high-tech rods offered by some makers, Pope says, “I have a hard time understanding why they cost so much.” Other manufacturers have taken the same approach. L.L. Bean recently introduced an outstanding travel-rod series of nine-piece models, also Korean-made, starting at $225-a bargain for a credible rod that fits into a 13-inch-long tube. Even the tried-and-true Fenwick HMG fly rods (now made overseas) can be had for well under the $200 mark. Cabela’s, meanwhile, has greatly expanded its flyfishing catalog in recent years and now offers more than 200 different fly rods at less than $200. Most of those are assembled offshore, but some, such as St. Croix’s, are made in America. Cabela’s mind-boggling variety includes such things as a five-piece Stowaway series in standard trout sizes selling for a paltry $90, and specialized float-tubing rods and even two-handed Spey rods for less than $200. For people who’d like to try flyfishing with a minimum investment, Cabela’s also offers a Cortland “Beginner Trout Combo” for about $40, which includes an 8-foot 6-inch rod with a reel, line, and backing. That’s about as low as you can go. Other major-brand companies such as Orvis, Loomis, Winston, and Sage have long offered so-called entry-level sticks at modest prices, but much of their emphasis has been on the high end. The budget trend, however, is now overwhelming, which is probably why Sage, known for its American-made premium rods, recently bought Redington, known for its low-cost versions from Korea. **THE RIGHT ROD
As with all fly rods, the best way to narrow down the myriad mid- to low-priced options is to go to a fly or tackle shop and test-cast some different models.

There will always be expensive, cutting-edge graphite fly rods, beautifully finished with pricey components and with actions suited for expert casters. Most flyfishermen, though, are adequate casters who go fishing just to have a good time. For those who choose their tackle by common sense rather than ego, the new wave of lower prices is a fantastic opportunity.