Angling for peace and quiet-- and a few trout, if you're lucky. 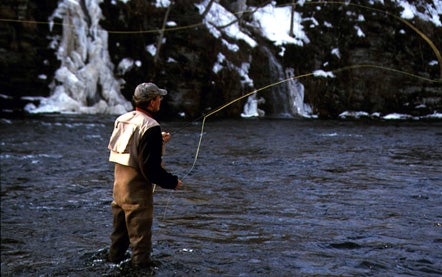 I found myself driving down the Thompson River Canyon on a cold, sunny afternoon, traveling slowly as fishermen will along rivers, so they can look at the water. Of course nonfishermen drive like bats out of hell on this twisty two-lane. Every few minutes an enormous SUV would roar up from behind and tailgate me. People who do that want you to speed up, so naturally I slow down even more. I know that’s a dangerously passive-aggressive maneuver-provoking road rage without actually engaging in it-but I enjoy watching their faces turn purple in the rearview mirror.

Whenever I came to a gravel turnout, I’d pull over to look at the river, incidentally letting a line of cars pass me and ignoring the dirty looks. The water was low and clear, the air chilly, the sun bright. A breeze was coming upstream so gently you wouldn’t even notice it on a warmer day, but that afternoon it was enough to cancel the effect of the sun. This was late November, approaching Thanksgiving, and a big snowstorm was in the forecast. If the weatherman was right, the barometer would already be falling, and I’m one of those who believe that low-pressure fronts bring on hatches and make trout want to feed, although I couldn’t tell you why.

Sure enough, there were some midges coming off and trout rising here and there. I’d park and walk up and down the shoulder, staying high for the best angle, studying eddies, side channels, and the foamy edges of the main current. The rises were so lazy that they barely made a ring. It was often easier to spot the fish themselves in the low, clear water. I’d locate a few trout, then walk back to the idling pickup and drive on, almost satisfied.

I was in one of those nonpredatory moods that can settle on a fisherman late in the season. I had a fly rod with me. Technically I had gone fishing, but so far I was just driving, looking at water, and enjoying the relative peace and quiet. It was an ordinary weekday afternoon with not much traffic on the road, but still more than you’d think. Walking the narrow shoulder to spot fish, I always turned to watch at the sound of an approaching car. People drive these canyon roads the way they see cars driven in TV commercials-except these are not “professional drivers on closed courses”-and they’re often in less than full control of their vehicles, what with a cup of cappuccino in one hand and a cellphone in the other. So I’d always look. If I was going to have to dive for my life, I wanted all the warning I could get.

Still, this was what you’d have to call a quiet time of year. In summer, the tourist town at the head of the canyon is fully geared up in the regulation cowboy hat and rubber tomahawk style, trying to make a year’s nut in five months. It’s harder work than it seems, and by midseason, the clerks in the shops have become fried from the constant pretense of hospitality. Their smiles still say howdy, but their eyes say, Aw, jeez, not another one.

Some tourists also seem dazed, and not entirely by the 14,000-foot peaks looming above town or the bull elk in velvet that stand around on the golf course. They seem to have realized what they probably suspected all along: that a sign saying Come See the Real West means this is one place where the real West no longer exists. Signs in the real West say No Trespassing.

It all works in a left-handed sort of way: They pretend to entertain us, we pretend to be entertained, and a regional economy survives. The vague sense of insufficiency we’re left with is nothing new to most Americans. It’s what makes some of us drive too fast and others just want to go fishing.

Through the summer the river gets about as crowded as you’d expect under the circumstances, that is, not too bad one day and so hideously mobbed the next that you immediately drive to one of the little creeks in the neighborhood where you can fish for smalr trout by yourself.

But by November things have wound down, and no one seems a bit sorry. In fact, I’ve long suspected that the 80-mile-an-hour chinook winds that sometimes blow through at this time of year are actually a collective sigh of relief from the summer tourist industry. Of course there are still plenty of fishermen on the river while the weather holds, but now they’re mostly locals and a few day-trippers who know that this little tailwater stays open longer than the other streams in the neighborhood. That afternoon there were anglers working all the obvious, well-known pools, so I was checking out the pocket water in between. There was a lot of it, people were ignoring it, and-I hesitate to say in print-there were trout rising all over the place.

On my fifth or sixth stop I finally decided to fish a good-looking run several miles downstream. I had almost reached the point where I could have scouted rising trout all afternoon, grabbed a cup of coffee in town, and driven home without ever stringing up the rod, but then something clicked. I was probably putting off fishing because I could see how hard it was going to be. Then it would have occurred to me that driving around looking at water was for the faint-hearted, while the real fisherman (whatever that is) would stand up and take his lumps like John Wayne. I don’t actually remember thinking any of that, but it’s how the process works.

I found two fish rising casually in the tail of a little slick and waded in downstream to see what was on the water. Looking upstream against the low sun, I could see scattered small flies in the air, but I had to watch a current seam for several minutes before a bug floated by. It was a tiny midge fly, about as small as they get: not much more than a speck with wings. I had some flies like that, so I lengthened my leader out to a 7X tippet and tied one on.

I couldn’t see into the water because of the glare, but I must have spooked the fish. After two casts, he stopped rising and five minutes later hadn’t started again. Then I got a few good drifts over the fish ahead of him but missed when he took the fly.

A little farther upstream there were four or five trout lying in a shallow bankside slick. They were noodling around lazily and rising every now and then. The sun was quartering off my left shoulder, and I could see them clearly. I stayed in the shade of some ponderosa pines, crouched low, and got surprisingly close.

The first trout I got a good drift over looked at the dry fly but didn’t take. On the next few drifts he didn’t even look, so I switched to a small pupa pattern. The same trout ate that confidently, and I somehow managed to pull him off the back of the pod and play him out downstream without spooking the rest of the fish.

I rested the spot for a few minutes on general principles, then went back and hooked another fish that blew up the pool. By the time I had him landed and released, the rest of the fish were long gone.

By then the sun was off the water. There were no more bugs that I could see, and no more rises in the next hundred yards of river. I’d just caught the end of the hatch, but I’d gotten two trout, both rainbows, one about 12 inches, the other more like 14. Two is a good number. One fish can be a fluke, but two seems to mean that you figured it out. And once you figure it out, the game can be over if you want it to be.

The sun was almost down, and the wind had picked up, as it does before a front. It was blowing upslope, which often means snow. Suddenly that cup of coffee I’d been thinking about a few hours before started to sound really good, and getting it wouldn’t be a chore in the off-season. There’d be plenty of room to park at the coffee place. I wouldn’t have to stand in line. The woman behind the counter would probably smile genuinely and might even ask how the fishing was. (The locals can always spot you for a fisherman.)

I de-rigged and drove the 5 miles up to town at a pretty good clip, keeping up with traffic for once. always spot you for a fisherman.)

I de-rigged and drove the 5 miles up to town at a pretty good clip, keeping up with traffic for once.