Want the perfect fishing stick? Build it yourself. 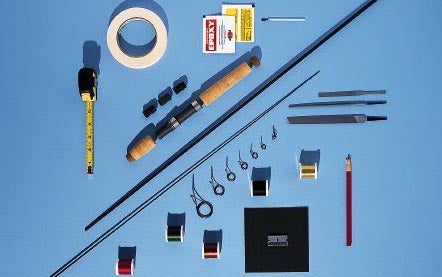 The late John Voelker, better known under his Robert Traver pen name as the author of books including Trout Madness and Anatomy of a Murder, refused to count the fishing rods in his closet. “If you know exactly how many rods you have,” he once told me, “then you don’t have enough of them.”

I think of that often when stowing gear for a weekend trip: one rod for this, another for that, and pretty soon I’ve lost count. One or two of those, however, I always stash with extra care because I’ve built them myself. Factory rods can be replaced, but my home-builts are unique and invested with sweat.

Rod building is enormously popular, partly because it’s a way to fill your closet at a big savings over the cost of comparable factory products. Prices depend on the quality of the blank you want and the hardware. The cost for Cabela’s kits, for example, ranges from $65 to $155. At the high end, you can get a $650 fly rod for $450 if you buy it as a kit.

Sometimes putting a rod together yourself is the only way to get the exact combination of component styles you’d like. But above all, it’s a matter of personal satisfaction. As with other angling crafts like fly tying or lure making, it’s a lot more fun to catch fish on something you’ve made yourself.

First-timers should start with a kit (see sidebar), which ensures that things like the reel seat, handle, and guides will be correctly matched and sized for the rod blank of your choice.

One thing you won’t need is a complicated set of tools. The project requires no more than a simple file, some sandpaper, a couple of razor blades, and some small disposable brushes. Apartment dwellers with limited space can do just about as well as their rural neighbors with full-fledged workshops. I won’t give step-by-step instructions here, which would only duplicate the ones that come with the package. Here are some tips, though, that those directions might not cover.

(1) Read the directions. It seems obvious, but not reading the instructions carefully is the single biggest mistake that novice rod makers commit. Go over them again and again until everything makes sense and is well ordered in your own mind. (2) Beware of corkscrews. Graphite fishing-rod blanks are made of a fiber-resin matrix wrapped around a tapered, solid-metal mandrel. After heat-curing, the mandrel is removed, leaving a hollow tube. Due to various manufacturing screwups, some finished blanks aren’t as straight as they should be. These usually go in the factory reject pile but sometimes make their way into rod kits. Inspect yours right away by putting the sections together (for rods of two or more pieces) and sighting along them. If you see a twist, curl, or corkscrew-like bend, return the blank and ask for a replacement. (3) Find the spine. All graphite rods have what’s called a spine, where the graphite wrap ended around the mandrel. (The word spline is often incorrectly used for this.) The wall of the blank is marginally thicker and consequently a little stiffer at this point. Your line guides should be aligned with this spine. If not, the finished rod won’t cast straight and will drive you nuts. All kits give directions on how to find and mark the spine for guide layout, but most don’t tell you why.

(4) Treat the feet. The portions of the rod guides that sit on the blank and are overwrapped with thread are known as the feet. You want a very smooth transition as you wrap thread up and over them. This means you have to file and sand their ends to a knifelike edge. Remember to remove any burrs you might have created on the undersides of the feet. Beginners tend to hurry the smoothing process, thereby making wrapping more difficult later on.

(5) Finish it slowly. Thread wraps on a rod blank are usually finished with a slow-curing, two-part epoxy, which produces a hard, glossy surface. MMany kits include it; Flex Coat and U-40 Dura Gloss are two common brands. If the epoxy manufacturer says that the ambient working temperature must be 70 degrees or higher, believe it. The resin and hardener must be in precise proportions. Use separate graduated syringes-the best tool for measuring small amounts-for the two substances. Novices commonly fail to blend the epoxy thoroughly.

Make a small tray, about 3 inches square, with aluminum foil and pour in the mixture. This spreads it out and avoids the heat buildup that would otherwise occur if the mixture remained concentrated in a small cup. This will greatly extend your working time before the epoxy solidifies. (6) Prepare to spin. The rod must be slowly rotated after you’ve smoothly brushed epoxy on the thread wraps. Otherwise, the coating will sag and harden into unsightly lumps. You can cut a couple of slots in a cardboard box to support the rod as you rotate it by hand slightly every 30 seconds or so until the epoxy starts to set. Or you can adapt a low-rpm motor from an old rotisserie to turn the rod for you. There are also inexpensive motors designed specifically for this task. In any case, prepare for this step before you start.

The hardest part may be resisting the urge to grab the rod and start whipping it around as soon as the epoxy seems hard. Let it sit for two or three days to allow the finish to fully cure. Then you can release all that pent-up anticipation.