Why the smallest fly in your box is the ticket to big winter action. 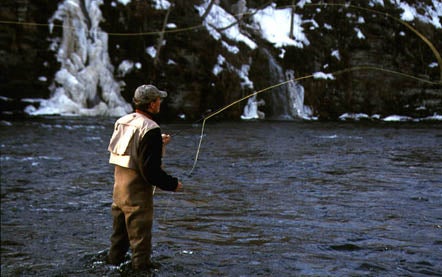 Which insect brings trout to the surface 12 months a year? Mayflies or caddisflies are good guesses, but they’re dead wrong. The answer is midges, tiny swarming gnats that buzz over the surface of just about every body of water. Although midges resemble mosquitoes, they don’t bite. They just stimulate some of the best winter trout fishing you’ll ever encounter.

I catch over half my trout each year on midge imitations. But I know that most flyfishermen don’t take advantage of them. Sales of trout flies fall off to almost nothing below size 18 (most midge patterns fall into the size 18 to 24 range), as do sales of fly-tying hooks. Don’t be one of the many anglers who shy away from using these flies before they ever try them. Here are some common myths about midge fishing and plenty of reasons why they’re false.

Every time I hear this trout-stream platitude, I think of the 24-inch brown trout I caught on a size 24 midge in New York’s Delaware River. Or the 8-pound, 29-inch rainbow that the famous trout guide John Gulley took on the North Fork of the White River in Arkansas. Big trout have to eat midges.

In a typical mountain trout stream, one of the few insects active from November through March is the midge. And because midges hatch in huge numbers, trout find them an easy, necessary meal. A trout in cold water needs to eat, on the average, 3 percent of its weight daily to survive. Although trout don’t always meet that requirement during the winter, when midges drift in the current and hatch, a 2-pounder may devour over 500 of them per day.

Don’t worry. With today’s advances in hooks and tippet material, catching a 20-inch trout on a size 20 fly is no big deal. Tackle for fishing midges is exponentially better than it was just 20 years ago. The tiny hooks used on midge imitations are far stronger, the points are sharper, and one type even has an oversize eye so it’s easier to thread. In addition, whereas tippet materials in the tiny 6X and 7X diameters used to test a pound or less, you can now buy 7X tippet (.004 inch in diameter, about the size of a hair) that tests at 21/2 pounds, plenty strong for most trout that you’ll encounter.

If you aren’t convinced, have someone tie a piece of 7X tippet material to a size 20 fly. Let them sink the hook into the end of your little finger. I guarantee they will be able to pull you around the room. You won’t throw the hook, and I doubt if the tippet will break.

Maybe not. But an honest flyfisherman will tell you that he only sees a dry fly part of the time. During most drifts, you approximate where the fly is and strike gently whenever you see a rise in the general vicinity. It’s no different with a size 20 than it is with a size 12. However, there are some tricks that help. First, look for the shine of your leader on the water. It will point you to your fly’s position, and you may even see the leader twitch when an unseen trout takes your fly. Another ploy is to make a few hard casts (off to the side of where a fish is feeding!) so that the fly lands with a hard splat. A few casts like this and you’ll get a better idea of where your fly goes. Some anglers roll a tiny piece of floating red strike putty 3 feet up the leader from the fly. Others attach a larger dry fly to the tippet, then fasten a foot of 7X tippet to the bend of the bigger hook and tie a midge to it. This helps you estimate the fly’s position and, again, may twitch if a trout eats the fly in a subtle rise.

One fortunate aspect of midge feeding is that trout usually do it in calm, unriffled water. Still, you might see just a wink on the surface. You might also spot the wide black head of a big trout porpoising. Other times, you might only see the foam on the water’s surface part as if an unseen hand has pushed it aside. In any case, it’s better to be safe than sorry. Strike gently, just enough to move the leader an inch. It doesn’t take much force to set these tiny hooks, and if the fish was not rising to your fly, you won’t make enough commotion to scare it.

Midge pupae are drab and simple, as are most of the flies that imitate them. The best ones have simple thread bodies with a pinch of fur or peacock herl at the head. Midge pupae are often the fish’s preferred stage of the insect, because as they’re trying to hatch, pupae drift helplessly in the current. Trout often take them right in the surface film, and you use standard dry-fly tactics. Either try a special midge pupa fly, or just trim most of the hackle and wings off a tiny dry fly and don’t put any floatant on it, so it drifts just under the surface. A pinch of that strike putty helps you to follow the fly and will indicate when a trout has inhaled it.