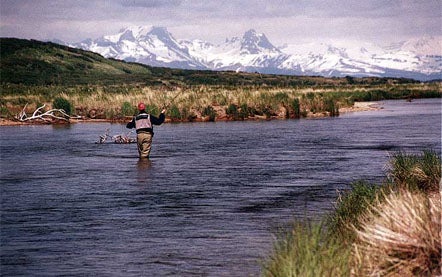 This column is going to get me-and maybe even you-in some trouble. That’s because there are some nifty ways to cheat in flyfishing for trout, techniques and shortcuts that can be expedient or fun but will have the purists screaming in horror. You won’t find these dirty tricks in any flyfishing books, including my own. They’re too unconventional. So don’t let the guy next to you see what you’re reading.

Nasty Knots
I was sitting on a flat rock in New York’s Beaverkill years ago with a famous fisherman who shall remain unnamed as we took a wader-clad break from one of several publishing projects we had under way at the time. As I watched, my companion tied a small, fuzzy nymph to his leader and then cast without bothering to trim the knot. I offered to trim it for him.

“No, don’t bother,” he said with a smile. “The trout don’t care about the leader going in one side of the fly. Why should they care about it coming out the other side?”

Heresy! The trout, however, indeed did not care, and he quickly caught three browns in a row from the riffle in front of where we sat. My friend was right, at least partly, and I’ve since sometimes left a knot untrimmed just for the hell of it. Keep in mind, though, that the leader can then sometimes screw up the way a fly floats on or drifts in the current because of drag created by the remaining tag end.

Many flyfishing knots, while effective, are also complicated to tie, a real deterrent for novices and a general pain for anyone in a hurry. I once got an eye-opener from one of this magazine’s legendary fishing editors, Al (A.J.) McClane, as I watched him rig a leader for another lodge guest who was a raw beginner. The kid had one of those knotless, tapered leaders that comes with a loop tied in the thick (fly-line) end. Ordinarily, I’d cut off the loop and attach the leader and line with a slim-but complicated and time-consuming-nail knot. But Al did it the easy way with a simple square knot in the fly line jammed around the leader loop (see sidebar). “There you go,” he told our new friend. “It’s not pretty, but it will work.”

Keep in mind that shortcut will only work if your leader is no longer than your rod, because the knot won’t easily pass through the tip guide. Such a bulky connection also tends to pick up weed hunks from the water, but if you’re in a hurry, it’s a great quick fix-even if it’s not the way you’re “supposed” to do it.

Secret Weapons
There are some other fun little tricks to try, even if they stretch-or break-the limits of what many call flyfishing. My Uncle Tim, for example, liked to use a streamer-and-spinner combination on his fly rod with devastating effect on the local trout. My dad would roll his eyes at this and taught me to follow the pure-fly route when I was young. But I was always secretly jealous of Timmy’s abundant trout. So now I carry a few of Hildebrandt’s Idaho spinners in my streamer box. These are simple and very light in-line spinners with a clip at one end for attaching a fly. Size 1 or 2 is perfect ahead of a small streamer: the flash attracts trout, and the vibration gives the streamer a lifelike wiggle. Using a spinner isn’t exactly flyfishing, although the rig is easy to fly cast; but on the other hand, you’re not using spinning tackle. I think it’s just fun to do sometimes, and I don’t feel compelled to call it anything.

Then there’s added scent, which is truly controversial. Rubbing something like Berkley Trout Dip into a nymph you’re going to drift slowly near the bottom certainly adds fish appeal to the fly. It’s about as close to baitfishing as you can get without actually impaling a live cricket on your Royal Wulff (which also works, by the way). In some artificials-only areas, added scent may be illegal. Otherwise, it’s yet another of those things that’s just a kick to try.

Any or all of the foregoing tactics might earn you a stern lecture from the holier-than-thou fly guys. But these are the same anglers who now routinely throw beadhead nymphs that are-in reality-not flies but little jigs. While I often enjoy using cobweb leaders and tiny flies for fussy trout, I also fish for the pure fun of it. If that means tying an ugly knot or adding a spinner blade, bring it on.