In autumn, big trout are suckers for streamers. 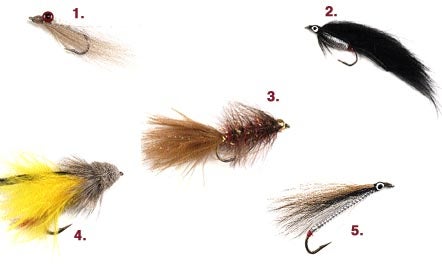 Only a genius or an overconfident moron makes sweeping pronouncements about fishing. So here goes. First, you’ll tag more big trout on streamers than on anything else. Second, fall is the single best season for fishing streamer patterns. Cool days make trout more aggressive, while in low water flows the fish hold in fewer places. And in those spots, big trout-looking to strap on the feedbag before winter-start bulking up on baitfish.

Streamers typically imitate forage fish, and there are as many ways to handle them as there are to rig a bass worm. These two will take you a long way.

SWING IT
A “quartering-down” presentation is the classic technique for fishing pools and those featureless, uniform runs that hold good fish but give few clues about exactly where. From the upstream end of the likely water, cast across the flow and about 45 degrees downstream; keep a tight line, and let the current swing the streamer in an arc until it’s directly below you. Keep the rod tip pointed at the fly throughout the drift. A trout can strike anytime, but most hits come near the end of the swing. If nothing turns up, hold the fly still for five to 10 seconds, then retrieve it with a strip-and-pause action. A fish will often peel away from the main flow to follow the streamer.

On big water, like the Yellowstone or Delaware, start with a short line, gradually lengthening your reach until you hit the far bank or the comfortable limit of your casting range. Maintain this length of line, take a step or two downstream, and repeat the whole process until you’ve fished through the run.

On small streams, you won’t get much of a swing. That’s fine. Concentrate on holding the streamer in a sweet spot directly downstream of you. You can sweeten it up with a few twitches, but keep the fly in the zone. The biggest spring-creek brown I ever hooked on a fly hit a Woolly Bugger that hung below an undercut bank so long I forgot I was fishing.

**PLAY DEAD **
Dead-drifting is standard operating procedure when fishing nymphs, but remarkably few anglers make the leap to streamers. A pity, because the method is deadly if executed with the right kind of fly, one that sports lots of supple, undulating material-marabou, soft hackle, or rabbit fur. Cast across and upstream of the holding water, and let the streamer sink and drift down naturally with the current. The trick here is keeping the line just taut enough to detect a hit, but not so tight that you influence the movement of the fly.

Once the fly drifts downstream of you, line drag will cause it to rise up in a kind of “vertical swing.” Let the line straighten-and stay sharp; this is often showtime-then retrieve the streamer in short strips. An unweighted pattern has the liveliest action in this kind of presentation, but crimp on enough split shot to get the fly near the bottom. Dead-drifting takes a little practice, but I catch more and better trout with this streamer method than with any other, particularly in tight, localized spots-such as boulders, washtub holes, and eddies.

If you really want big fish, head to a river that feeds a lake or reservoir where there are brown trout. In the fall, they become territorial and short-tempered. Nothing lights the fuse quite like a streamer.

The Fall Fly
Earlier this year, Orvis stepped outside the stained-wood floors of its 27 retail stores and into Wal-Mart’s jungle of baitcasting rods when the company launched a line of entry-level flyfishing gear. “Green Mountain by Orvis,” which sells for about $100 and is available exclusively at select Wal-Marts nationwide, includes a rod and reel, fly line, leader, tippet, and accessory kit.

While the move may have some of the old-school Orvis purists frowning, Jim Lepage, the company’s vice president of rods and tackle, says they just want to reach out to future Orvis diehards. -Colin Kearns