Learn how to spey cast and you can reach any fish in the river. 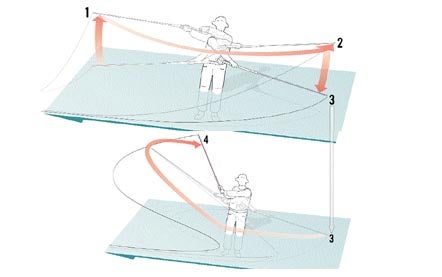 Why is a form of casting first developed in the mid-1800s the hottest technique on salmon and steelhead rivers? Because with a spey rod, you can put a fly in front of a distant fish without wearing your arm out.

The method was first developed on Scotland’s River Spey, where conventional fly casts are made nearly impossible by high banks. Using 15- to 20-foot rods crafted from greenheart and bamboo, salmon fishermen were able to power double-handed casts to salmon lies 100 feet or more away without using a back cast that would snag the brush behind them.

Today, most salmon and steelhead anglers in the Pacific Northwest fish with spey rods, and the approach is also catching on in big-river trout fishing. The resurgence of interest is largely due to modern graphite fibers that can be built into long rods that are extremely light in weight. This leads to one of spey casting’s biggest advantages-less arm fatigue. It is far less taxing on muscles and tendons to cast a long rod using two hands all day than it is to cast a shorter, one-handed rod.

Spey casting offers other distinct advantages for a wading fisherman. First, he can reach distant lies from any spot in the river because he doesn’t have to worry about obstructions at his back. Second, he’s able to mend line and control the drift of his fly at greater ranges than he could with a single-handed rod.

The Double Spey
The easiest spey cast to learn, the double spey, is used (for a right-handed caster) when the river is flowing from left to right, called “river right,” although it can also be used on the other bank simply by reversing the hand positions.

**[BRACKET “1”] **Start with the fly line straight downstream. Drop your rod tip low to the water. Point your right foot and orient your body toward the target where you intend your fly to land. Lift the rod to head height, using the same motion you’d use to mount a shotgun, then sweep the rod upstream in a flat plane. It helps to imagine the rod tip attached to a curtain rod.

**[BRACKET “2”] **Drop the tip toward the surface, positioning the tip of the fly line (not the leader or fly) about one rod length downstream from your position. Use too much force and you will bring the line tip upstream from you, which will result in the line fouling itself on the forward cast. If you position the fly-line tip farther downstream, it will create too much drag to lift the line out of the water on the cast.

**[BRACKET “3”] **Sweep the rod back downstream on a slightly inclined plane. The line should rip off the water audibly, creating a slash of white water that spey casters call the “white mouse.”

**[BRACKET “4”] **Sweep the rod sideways and behind you, keeping the path of the rod tip in a flat plane. In the same continuous motion, raise the rod at the back of the sweep to the one o’clock position, forming a D loop in the line behind you.

[BRACKET “5”] Begin the forward stroke by sharply pulling your lower hand tight to your chest, like a gorilla thumping his chest, while pushing forward with your upper hand. Use equal power for both motions. Stop the rod abruptly at 11 o’clock as the line unrolls forward in a tight loop. When you finish the cast, your bottom hand should be tucked under your opposite armpit.