Get the Bugs Out

Three bass popping mistakes and how to fix them. 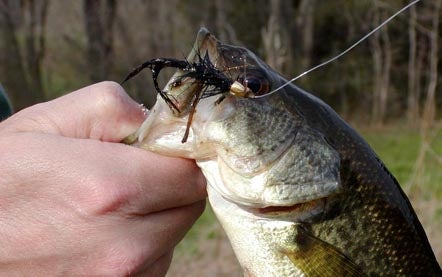 Flyfishing for bass is a slow-paced antidote for metal-flake run-and-gun tactics. It doesn’t always offer the most or the largest bass, but it’s relaxing in the way bass fishing used to be, and that’s the fundamental appeal.

Sometimes, though, it’s too relaxed. Catching bass on a surface bug is so often assumed to be a simple process that too much gets taken for granted. Wobbly leaders land floating bugs off target. Sloppy line handling produces fewer strikes, and impatient retrieves keep bug and bass from making contact. Pay just a little more attention to these three problems, and you’ll take a lot more bass with surface bugs.

[BRACKET “1”] A Poorly Placed Rod Tip
The biggest mistake most people make is holding the rod tip a few inches above the water. That leaves a short curve of slack line between it and the surface. When they strip a few inches of line to work the bug, the force of that strip is used up in shortening the slack and the fly moves only a little. If a bass does strike, that sag sometimes means you’ll miss the fish.

The rod tip belongs right on the water’s surface when you’re retrieving. With no slack line, if you make a 6-inch strip, the bug moves 6 inches. The retrieve is completely controlled, and you can work the fly more effectively.

[BRACKET “2”] A Weak Leader
Even the best retrieve won’t help much if your bass bug lands off target. Flies for largemouths tend to be bulky and air-resistant. A bass-taper floating line of 8-weight or greater helps in accurately casting them because of its exaggerated weight-forward bias, but that’s only part of the solution. Leaders are just as important and are typically neglected.

A poorly designed bass leader will fall back on itself as the final cast is completed, or it may flop to the left or right as the cast straightens. In any case, your bug will land a foot or two off target, instead of being inches away from that shoreline stump where the bass are.

[NEXT “Story Continued…”] I solve the problem by cutting about 18 inches off the forward end of a new 8-weight bass line so that the forward taper ends more abruptly. Then I use a nail knot to attach 3 feet of stiff, 40-pound-test monofilament (.025-inch diameter). Finally, I attach a common 71/2-foot knotless, tapered bass leader (.023-inch butt diameter) using a blood knot, and cut about a foot off the leader’s 12-pound-test tippet end. The combination of stiffer butt and shorter tippet does a better job than most off-the-shelf leaders in turning a big bug over at the end of a cast.

Make sure your surface-bug leaders are nylon and not fluorocarbon. I’ve seen some newer fluorocarbon products labeled as bass tapers, but fluorocarbon sinks more readily than nylon and will drag your floating bug underwater as you retrieve it.

**[BRACKET “3”] An Incorrect Retrieve **
Having mastered line control and fixed your leader, you still need to find the right rhythm for a retrieve. Usually, that means slow. Some bass will smash a surface bug when it first hits the water, and aggressive fish may nail a fast-moving popper. More often, though, a suspicious bass will eyeball your bug for a while before doing anything.

Of course, if a standard slow retrieve isn’t working, by all means try speeding your bug across the water. There are days when bass want bugs moved to a hip-hop beat, but more often it’s poppers played to a slow waltz.

Countless times in clear water I’ve watched the gentle splat of a landing bug bring a curious bass swimming over for a look. The bug sits still. So does the bass, just a few inches underneath, as if it’s waiting to see what will happen next. After what seems like an eternity-actually about 20 or 30 seconds-I give the bug a gentle twitch, just enough to wiggle its hackle and rubber legs. Most of the time, that’s enough to bring a gasp-inducing strike.