When all else fails, big flies produce. 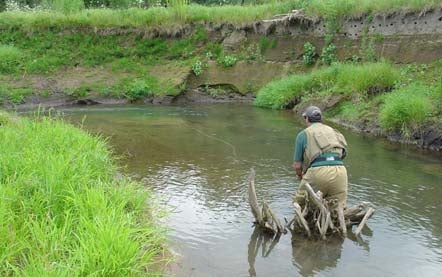 The only time I ever saw trout feeding on grasshoppers en masse was on a prairie lake in Montana almost 20 years ago. It had been a lush, wet spring followed by a hot summer, ideal conditions for grasshoppers, and a standing wave of them rose in front of my old friend A.K. Best and me as we walked across a grassy meadow toward the lake.

When we reached the shore, dozens of the bugs plopped onto the water. Immediately, a trout took one. Then another hopper vanished. In less than a minute of furious feeding, all the insects were gone. Best turned to me. “So, what fly you gonna use?” he asked.

These moments aren’t common, but trout (and trout fishermen) have good memories when it comes to such easy pickings. It’s why I always carry some big, ugly dry flies in my box.

When to Use Them
There are three opportunities to fish these flies. One is when trout aren’t actively feeding and it takes something exceptional to bring one to the surface. Another is during a sparse or intermittent hatch, when fish are in an eating mood but there isn’t exactly a smorgasbord of insects available. The third is as a last resort amid a steady rise when the trout won’t even glance at your best copies of the hatching insects. In all cases, big uglies usually work a little better in broken riffles and pocket water than they do in smooth glides.

**Patterns to Pack **
By fishing big, ugly dry flies, you’re taking advantage of a trout’s weakness for a juicy meal. Because you’re not trying to copy something that the trout are actively feeding on, you don’t need to worry about realism. I carry three varieties. Each has its own best application:

** Hoppers:** These flies are so popular that shops sometimes sell out of them by late summer. They can work beautifully at times, but on some heavily fished streams the trout have seen so many that they get wary of them and it can be worth trying something else.

My two favorite grasshopper patterns are the beefy Dave’s Hopper and the trimmer and more visible (to me) Parachute Hopper. I’ve caught fish using these flies in open water but usually fish them close to shore. Try bouncing yours off some tall grass you find growing along the stream bank so that it falls into the water with an audible plunking sound.

lBeetles: I’ve had good luck at times with large beetles. The ones I use are made with black, closed-cell foam and have bright orange or chartreuse buttons of yarn tied in on top to increase their visibility. Most go by the generic name of foam beetle. As with hoppers, they’re most effective when fished next to the bank on a dead drift.

Stoneflies: Stonefly patterns can work well if the trout are used to seeing and eating the big insects. I usually use Stimulators in various colors to imitate them but will tie on an oversize Goddard Caddis to serve double duty if I think that giant caddis are also in the area. With both patterns, I always try a dead drift first, but I’ll twitch or skitter my fly a little if I don’t get a strike right away.

If all else fails, get creative. I’ve talked to fishermen who have caught trout on oversize dragonfly patterns originally tied for bass, and even on bluegill poppers. These flies may not be pretty, but it’s hard to care when you’re catching fish.