Fly of the Month: The Partridge and Orange 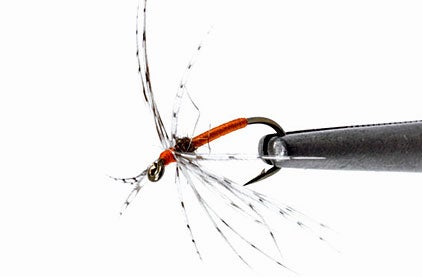 DIRECTIONS
Step 1 Attach thread behind the hook eye and make three wraps toward the bend. Peel the fuzz from the base of a grouse hackle and strip off the fibers on its right half (as you look at its convex side). Use the correct hackle size. The lowermost fibers should be as long as the hook.

Step 2 Mount the hackle atop the shank, with the concave side up and the tip over the eye. Clip the stem, and continue wrapping the thread in close, touching turns to a point on the shank just above the barb. Reverse direction and wrap back, stopping a third of a shank-length behind the eye.

Step 3 Dub a ball-like thorax halfway to the hook eye. Position the thread in front of the dubbing.

Step 4 Take two wraps of the hackle toward the bend. Then capture the hackle tip with one wrap of thread.

Step 5 Wrap the thread forward once through the hackle. Secure it with three half hitches, clip off the hackle tip, and dab tying cement to the head.