The youngest Classic winner ever caught the heaviest tournament stringer on record, despite weather that gave his competitors fits. How'd he do it? Homework. Our writer was there as Clausen formed the plan that won the tournament. 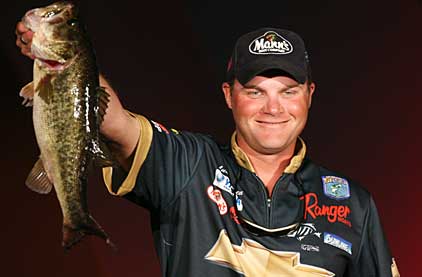 Note: Make sure to keep an eye on Field & Stream magazine for an in-depth look at Clausen’s Classic win

On February 15, nine days before the 2006 Citgo Bassmaster Classic (the self-described “Super Bowl of competitive fishing”), I waited at a remote boat ramp on the eastern bank of Florida’s Lake Kissimmee. I had taken a red-eye flight from Denver the night before so I could rendezvous with the young bass pro now zooming his boat across the lake in my direction.

My story angle was straightforward: I would tag along during the second day of the Classic’s open practice session, peek over his shoulder, ask a few questions, and maybe land a few printable insights as to how a pro from the other side of America scouts the “money spots” in bass water before a big tournament.

That angler was Luke Clausen.

I had no way of knowing at the time that I would spend the day floating through the very areas, and watching Clausen work the very same technique, that would win him the whole enchilada (including a $500,000 payday). I’m not sure he imagined that either.

But the signs were all there.

For starters, I was immediately struck by how loose and relaxed he seemed. While many competitive anglers are notoriously guarded with their information, and understandably nervous before the showcase event on the B.A.S.S. tour, Clausen was an open book from the onset. Maybe he didn’t think he had a chance. Not many of the bass pundits did. He said he was glad to trade his insights for some magazine exposure. Then again, maybe he though he had the thing in the bag.

After all, chilly weather and finicky fish had many of the other 50 competitors collectively groaning about the first day of practice being a waste of time. But Luke was smiling, saying he had found a decent bite earlier that morning and that all the negative buzz wasn’t affecting his outlook.

“I try to stay away from the dock talk,” Clausen said. “Conditions change every day. You have to have tunnel vision, and develop your own instincts to adapt to what’s happening.”

The irony was that I had contacted Clausen on a hunch, knowing that the Spokane Valley, Washington, native came from the “western school” of bass angling, where sight fishing is a staple. Everyone had assumed that spawning bass would be up in the sunny shallows during the Classic. But the water was now windblown and dirty, hovering in the mid-50 degree range, and the sight fishing was poor. My hunch was apparently blown out of the water.

But Clausen was already on his Plan B.

He explained that the art of scouting a lake can be broken down logically:

By that second practice day, Clausen was already zoning in on his plan.

“I have a feeling that this Classic will be won on Lake Kissimmee,” Clausen said, as he tied a bait to his line, “And I think something like this worm (a Junebug-colored Mann’s HardNose Worm) will do well, especially if you fish pad roots and isolated weed patches, in, say, three to five feet of water. The worm is pretty much a do-all for fish on the bottom.”

I watched Luke hook a few fish on that rig, nothing huge, but enough to set his mind at ease. We spent the rest of the day experimenting with a swim frog and flipping an Arkansas Beaver with a 1 1/2-ounce weight through the weed mats. He didn’t have a hook in either bait, he was just looking for tugs. I watched his eyes go wide in one particular mat of alligator grass, when a huge fish played tug-o-war for about 10 seconds before letting go, earning a waypoint marker on Clausen’s GPS.

Luke ultimately decided to stake his chances on an area in the southeastern region of Kissimmee. It was a wise choice for a young man, who, at 27, would become the youngest ever champion of the Classic.

Clausen would lead the tournament wire-to-wire. He gutted it out through deteriorating weather in the same general region all three days, using the same technique: slowly, deliberately working that dark worm in three to five feet of water, through isolated weed pads, focusing on pad roots. His total weight for the three days of competition, 56 lb.-2oz., was an event record.

I got a follow-up call from Luke two days after the Classic. He was on the same even keel. After all, Clausen has now fished in two $500,000 winner’s purse events, including the 2004 FLW championship, and won them both.

“Apparently I’m not focusing hard enough on some of the smaller events,” he joked.

According to Luke, scouting the water is a critical factor for casual anglers as well as the world’s elite.

“The pre-fishing played a huge role in winning the Classic,” he said. That big first day (29 lbs.-6oz., a one day Classic record) proved to be the margin I needed to stay ahead, and I was comfortable with my area enough Â¿Â¿Â¿ I had so many good bites there Â¿Â¿Â¿ it was worth going back to all three days.”